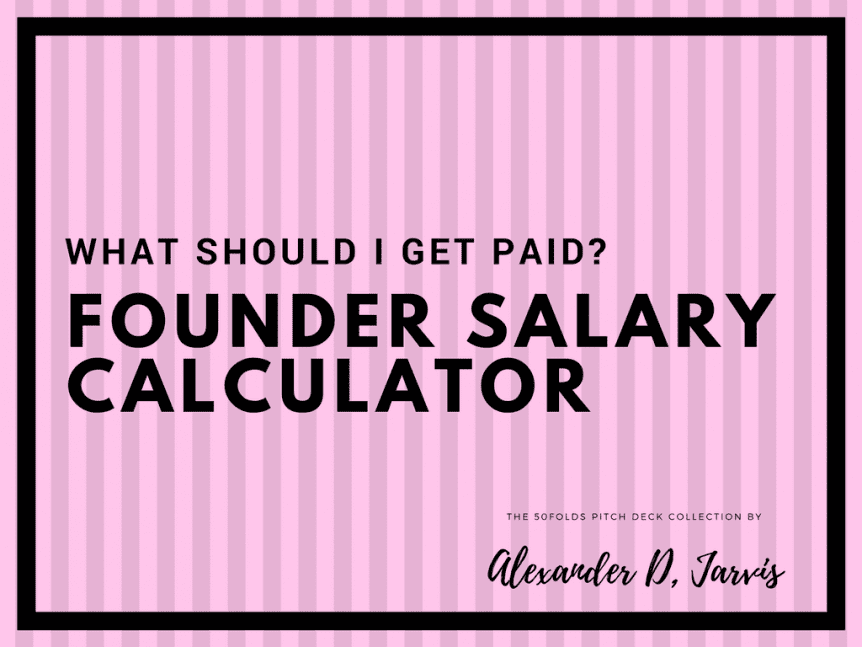 TL;DR: Startup founder salary to figure out how much you should be paid as a founder in the early days

Whether you are bootstrapped or raised a series-B, you are probably wondering what your founder salary should be right?

On the one hand, cash is nice, especially when it comes from investors, but on the other hand, you need to grow! Everyone is in different circumstances, has opinions on lifestyle and sense of responsibility. Ideally, you pay yourself a token amount of a $1 like big-name CEOs do, but you’re unlikely to have a tonne of cash under the mattress to be able to afford that (and let’s face it they are getting a gazillion $ in stock-based compensation.

Having reasonable salary expectations are really important when raising though. VCs totally judge you on it! If you are raising a seed of $700k and the founders each expect a salary of $100k, you can be darn sure VCs will call BS and think poorly of you. That cash should be going to grow. I’ve seen it a lot and I laugh each time.

The only exception I know is where the founders are 2nd/3rd-time founders in their 40s and simply are not going to put up with not being paid shizzle. I only know two examples of this and where it was fairly reasonable. But 99% that isn’t you.

Anyway, Chris Janz put together a basic model (as he tends to do). It’s certainly not scientific but it’s a decent guideline to go by.

In the calculator, I’ve assumed that the “entry salary” for a Berlin-based founder who doesn’t have kids is $50,000. I’ve then assumed that that amount increases to $75,000, $95,000 and $115,000 when you reach funding and revenue milestones that roughly correspond with a Series A, Series B and Series C round, respectively. I don’t think founders should get salaries that make them rich, but as soon as the company can afford it the founders should get enough so that they don’t have to be worried about how to make ends meet all the time.

A startup founder salary doesn’t reflect the value which she contributes to the company anyway, so who cares if one of them gets a little more than the others. My model, therefore, assumes that for each kid you add $10,000 (multiplied by the location factor, more on that soon). Whether this is the right amount is of course debatable, and there can be other aspects besides having children that need to be taken into account. The “need-based” approach can, of course, go both ways: if a founder had a sizable exit already, he may want to forgo his salary or reduce it to a symbolic amount, at least in the first few years.

I’ve defined Berlin as 1.0x and have assumed that in Paris, London and San Francisco, you’ll have to pay yourself 1.3x, 1.5x and 1.8x as much in order to have a similar standard of living. These ratios are roughly in line with the data published on this website.

The model assumes that the startup founder salary gets a fixed base with no bonus.

The model doesn’t differentiate between the founding CEO, tech founder and other roles. In the first couple of years it’s usually not necessary to differentiate based on the founder’s role because everyone in the founder team carries a similar load. At a later stage, when the company has a bigger leadership team, it makes sense that the CEO gets more than the other founders.

The blue numbers are input variables and you can change them if you’d like to adjust the model. The brown (sic, black) numbers can be changed, too, but aren’t used as inputs for the calculation.

Hope that helps you figure out what startup founder salary should be, or if you are an investor what is fair for founders.

You can get the spreadsheet here.

If you want to watch the video version of ”What should founder salaries be?” You can watch below: