I know partners there that have done so in a region. I’ve met the founder recipients at the parties.

You just don’t know it. There aren’t that many pre-seed or even seed deals worth doing.

There is a reason that Sequoia aims to be the ‘lowest priced term sheet’ in a deal.

Their view is that if you don’t take money from them, you are an idiot.

You don’t know the ins and outs of VC. It’s really hard. It’s super complex and incredibly competitive in the big leagues (especially since funds have too much money). You will never truly get it till you are in it.

If you make ‘lots of small bets’ you have to manage those companies since Sequoia is typically a lead investor. They need to deliver on the value add. That’s a whole another topic.

With a large fund size, you need to have enough ownership, for any investment to work to make the fund. This means doing pro rata ++. Frankly with a large enough fund size, it can make more sense to wait to S-A and put in a proper $5m+ so any effort is worthwhile.

But what does ‘lots’ mean?

Once you gt to about 50 companies you get your ‘outlier’. 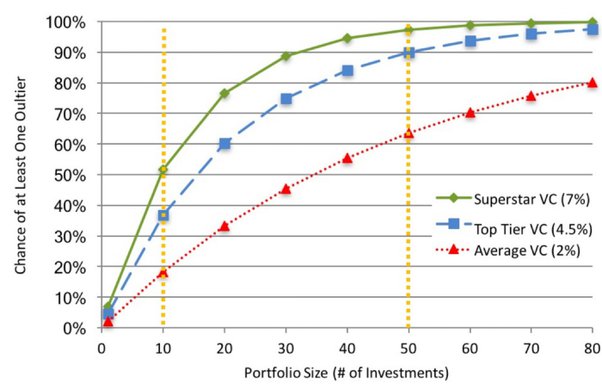 50 really is the cap. It’s a ridiculous number of companies to track.

I’m a director of a fund and I get 170 pages to read for 4 deals for a fund Board Meeting. That’s insane.

What does ‘lots’ mean to you?

500Startups have tried to claim the portfolio diversification model. I have their decks so I know their returns. I know they are fine. They aren’t nuts.

Something you would learn if you were an investor is quite how few ‘crazy’ companies there are to invest in. If your standard is high, you can only do so many. There’s a real limit.

Most startups are crap. They won’t generate VC returns. The returns you need.

If you really understand Pareto and compound interest, this notion will become easier to you.

I’ve learned it’s one thing to read something and another to experience it.

VC is not even a home-run business, it is a grand slam one.

I rock founders minds when I do consulting calls and really explain how the world works. They need to go away and figure out how they can be a $1b company not a $100m one.

I quit a VC to raise my own fund thinking my reasoned first principles were smarter than the Americans and I could do things differently with lower loss rates etc.

When I really learned and did the math I realized how naive I was and that the big VCs do things a certain manner for a reason.

It’s a sign of intelligence to question how things are done.

It’s just naive to think that smart people haven’t figured out what you are questioning already.

I don’t think you can disrupt normal VC.

Similarly, Sequoia do things a certain way as they have a lot of smart feckers thinking about it.

To get returns involves luck, but audaces fortuna iuvat.

So only back top companies.