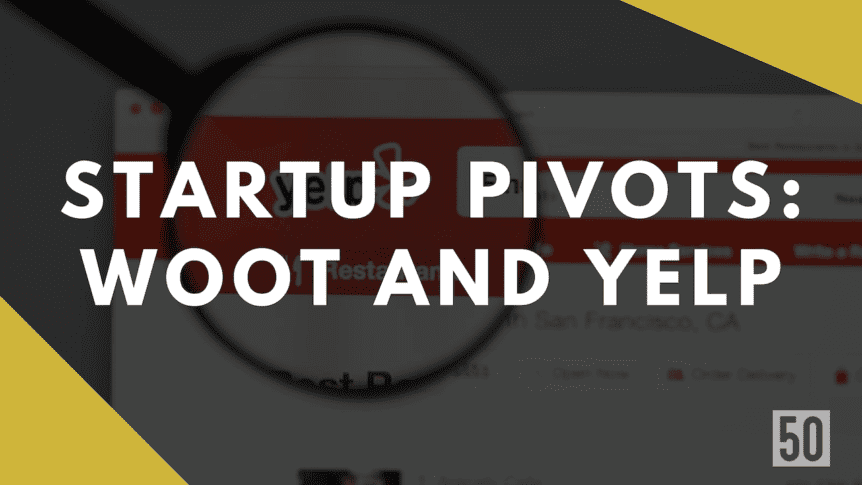 Video on Woot and Yelp

“Woot is a term of excitement, like ‘Yahoo!’ or ‘Hooray!’, but much nerdier,” says Matt Rutledge, the founder who turned Woot.com into one of the most unusual and frequently-trafficked ecommerce companies in the US.

Woot evolved from a distributor company then that I had started in the 90s that was basically a non-internet company. This was get on the phone and sell computer parts to stores both locally in the Dallas area and then nationwide as we started to pick up more and more sort of closeouts from manufacturers.

We persisted in that model for a lot longer than our peers and then before Woot was launched our customer base was down to the big box retailers, the CompUSA’s and Computer City’s and Circuit City’s and all these places that are now out of business themselves. But basically Best Buy type stores. Huge, multi-location, sometimes hundreds of locations stores that would buy big batches of inventory to move through.

When we’d get stuck with an item, when we had something that those customers didn’t want because that customer base had become so focused in only a few accounts we realized that we were up side down or stuck with a product more quickly than we had in the past.

So we looked for outlets to blow that product out as quickly as we could because it was controversial that we needed to do that.

So Woot was actually a solution for the wholesale companies’ problem of making mistakes and having run out and bought a bunch of either computer related or consumer electronics related items that we were sort of stuck with. It wasn’t really designed as a “Let’s have fun on the internet and be snarky and invent this daily deal model” which we did but we didn’t invent those things for the glory of inventing them. We invented them to solve the very real problems of our business. They achieved that and then I think what leaked through and maybe added to people’s enjoyment that was more our personality coming through.

The result was a new model for online shopping that combined bargain hunting with scarcity and urgency, all while maintaining a sense of humor that would become a company trademark.

I think we had some robotic law mowers the first day. We were fairly arrogant about our marketing and we sold cheap. People thought, ‘They must be stolen!’

The funny thing is, as you can see with a lot of these case studies, luck and just trying shit actually can pay off.

We’re almost a study of how lazy you can be and still have success. It’s been fun to prove conventional wisdom wrong.

Matt ultimately sold Woot to Amazon for $110 million and worked with Amazon for a couple of years but most recently left to start meh.com which is by his own admission very similar to Woot.

After PayPal was sold to eBay, Jeremy Stoppelman and Russel Simmons cashed out and began kicking around startup ideas with a former colleague, PayPal co-founder Max Levchin in 2004.

One day Stoppelman was looking for a doctor but had no clue how to find a good one (Same story for Zocdoc, btw). That gave him and Simmons an idea for an overly convoluted automated system in which people could e-mail friends asking for recommendations on, say, local doctors. To make it scaleable, the answers would be stored in a communal site for everyone to see if they had the same question.

Levchin floated the cheeky chappies $1 million to build out the plan.

As with most successful pivots, the co-founders noticed an interesting behaviour among their first early users. People were writing unsolicited reviews of their favourite businesses just for… shits and giggles.

I remember the moment that Russ said, ‘There should be a way for you to write your own reviews without asking questions.’ – Jeremy

What they really wanted to solve for though, was not a new doctor, it was their search for the greatest restaurants and clubs in San Fran. I love to party too…

To get Yelp off the ground, they decided to mix business with pleasure and started hosting Yelp parties at local venues. The parties got people talking and writing reviews, building up Yelp’s content.

Fast forward and a lot of people got their rocks off using Yelp as a form of social network. Some people take it seriously to the point that South Park made a rather ‘delightful video.” It’s actually totally gross.

One of the first surprises was the length of reviews and the attention to detail. People think they have to write reviews of a certain quality or there’s no point. A lot of them are funny. Some are poetry. I saw one review in the form of an IM conversation with Skeletor

Yelp’s done pretty well out of a blind pivot. Let’s not get into the accusations of blackmailing retailers now.