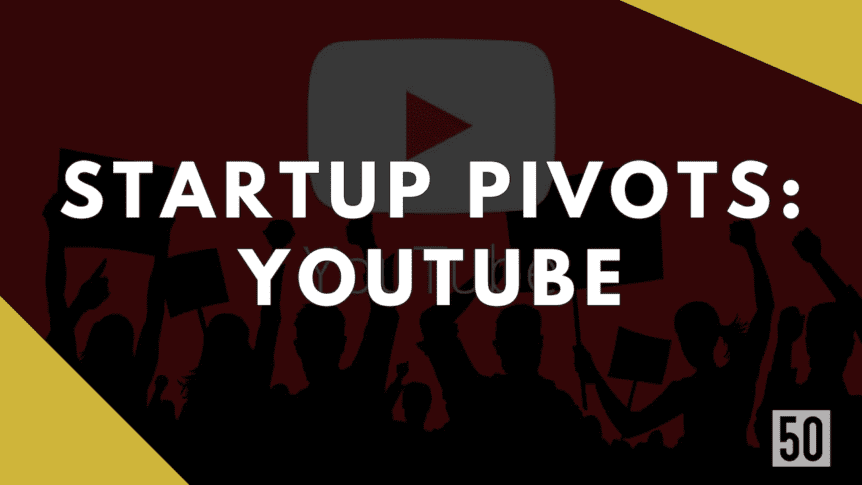 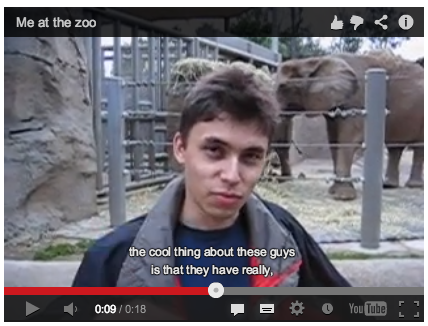 In January 2005, two former PayPal employees Chad Hurley and Steve Chen (Jawed Karim is technically a cofounder and was around for YouTube’s early days. He enrolled in Stanford after YouTube was founded) were at Chen’s new house in San Fran. They recorded some random videos and realised they had no way to share it with their friends. The video files were simply too large to email, internet sucked so uploading took hours (Most people didn’t have broadband) and wasn’t a standard for video playback. Hurley and Chen had made some bank from eBay’s $1.54b purchase of PayPal in 2002, so screw it. They decided to scratch their itch.

Bullshit. Let’s face it. That story is too easy. I know from helping founders tell their stories with Perfect Pitch Deckthat telling a ‘simple story’ like that is hard! Chen admitted:

[This story] was probably very strengthened by marketing ideas around creating a story that was very digestible.

I.e. they rewrote the story to explain it to people. You need to do the same thing.

For Karim, two events typified the problem: the 2004 tsunami in Indonesia and Janet Jackson’s boob share during Super Bowl XXXVIII in 2004. Karim found that even though everyone was talking about it, you couldn’t find a video online. With the tsunami, he though there were probably lots of videos of the disaster, but no way to watch them.

On Feb. 14, 2005, the three officially started work on YouTube. In sad nerd land, the reality is: “That’s one of those things about being a computer science major, Valentine’s Day is just another day.” LOL.

In a startup, you need different kinds of founders. Different is good. Roelof Botha (Partner at Sequoia) was CFO at PayPal reminisced in an interview. Karim was a “very independent thinker, fiercely independent.” Chen used to take frequent smoke breaks. Hurley was quiet and often the odd man out because he was one of the few people at the company who was married at the time. (Hurley married Kathy Clark, daughter of Netscape co-founder Jim Clark, in 2000.)

Whilst you know what YouTube does not, originally it was not to solve what you thought. They were inspired by HotOrNot, a dating site that ranked people on a 1-to-10 on a hotness scale.

I was incredibly impressed with HotorNot, because it was the first time that someone had designed a website where anyone could upload content that everyone else could view,” Karim told Time in 2006. “That was a new concept because up until that point, it was always the people who owned the website who would provide the content.”

I was incredibly impressed with HotorNot, because it was the first time that someone had designed a website where anyone could upload content that everyone else could view. That was a new concept because up until that point, it was always the people who owned the website who would provide the content. – Jawed Karim

We always thought there was something with video there, but what would be the actual practical application? We thought dating would be the obvious choice. – Steve Chen

We even had a slogan for it: Tune in, Hook up. The whole thing didn’t make any sense. We were so desperate for some actual dating videos, whatever that even means, that we turned to the website any desperate person would turn to, Craigslist. – Jawed Karim

In 2003, Mark Zuckerberg was similarly gobsmacked by HotOrNot and created Facemash; the predecessor for Facebook.

HotOrNot may be the most influential website of all time. No shit!

On April 23, YouTube went live. Video wasn’t cheap so they took full advantage of a $129-a-month unlimited data plan from ServerBeach, an ISP.

In the beginning, we found that very few people came to our website. The product was so primitive that you couldn’t even choose which videos you wanted to watch. Instead, the website picked the videos for you, randomly. And because there were so few videos, they were the same ones, over and over again.

Guys, this is a HUGE learning. Ship code and test! Don’t be perfect!

They didn’t know what YouTube was, exactly. The founders couldn’t describe the project, so… they called it a dating site. Since there were no videos online, Karim populated it with videos of 747s taking off and landing. In desperate to get people online, they ran ads on Craigslist in Los Angeles and Las Vegas, offering women to upload videos

Despite offering to pay women $20 to upload videos of themselves to YouTube, nobody came forward, forcing Chen, Karim and co-founder Chad Hurley to adopt a different strategy.

OK, forget the dating aspect, let’s just open it up to any video- Chen

So not exactly a master plan…

YouTube’s first official video was Karim’s Me At The Zoo. Eighteen seconds of elephants.

Another vision for YouTube was some sort of video messaging service, a little like Path (Which didn’t exactly have a huge exit).

What they actually did was a completely different use case which we know today; people uploaded videos and shared them with everyone.

Things changed in 2005 , when Karim attended a BBQ at PayPal alum Mike Greenfield’s house. Keith Rabois (Yeah, he’s had a tough time) was there and asked Karim what he was up to. Karim told him he was working on a new video-sharing site called… YouTube.

Rabois then asked him three questions

Does it use Flash? Does it host professional or long-tail content? Can you distribute the content on the web?

Karim replied that it was:

They went to Greenfield’s bedroom, got on his PC and watched the limited content they had at the time, which took about a half-hour.

There were only two times I’ve done that. The other was with Airbnb. Literally from February 2003, I’d been looking for something that used Flash

Shortly after the BBQ, Rabois emailed Botha about YouTube.

Within 24 hours I had signed up. The site was so small then that the site was still scanning the names of users, and the YouTube creators recognized Botha’s name. Botha got married in 2003 and had videos on his hard drive that he hadn’t been able to share. With YouTube, Botha saw the utility immediately.

By the end of the summer, Botha at Sequoia Capital got them $500k. You can read the confidential internal Sequoia memo here.

As they built up, the office was ghetto. Christina Brodbeck, a designer at YouTube said:

The place was infested with rats. Giant rats — like the size of cats! I remember sleeping in the office one night on this old slip-covered sofa, and you could hear the rats crawling around in the wood rafters.

This video shows the San Mateo office, including the mention of a dead rat.

They used curtains in the office because they couldn’t afford walls, as they explain to MC Hammer in this video:

Botha said that much of YouTube’s success came because the site was so easy to use. They made sure you could load a video in any format to the site.

You could load it and they took care of transposing it back in Flash. – Botha

I often liken building consumer products to playing music or art,” Botha said. “You can get 98% of the notes correct and it will still be off.

People don’t mind if products aren’t perfect, as long as they work. You have to do one thing well.

The inspiration for their sharing functionality was PayPal, in particular, a payment button bloggers could use on their own sites.

That button took them back to the PayPal experience. We tried to do the same thing with a video solution. – Hurley

Botha recalls that after Google bought YouTube, he overheard a Google engineer complaining:

I don’t know how they won. Our video quality was so much higher. – Google whiney bitch

Simple however is better:

With Google Video, you needed to know what codec your video and what was the dimension of the video frame. With YouTube it was all in Flash and when you wanted to upload a video to YouTube, the only thing you needed to do was push a button that said ‘upload. – Gideon Yu

In November 2005, YouTube closed a $3 million Series A round from Sequoia. In 2006, someone uploaded a video featuring Andy Samberg and Chris Parnell of SNL mocking their own nerdiness with a rap music parody called “Lazy Sunday.” Finally, this was the viral content that would demonstrate their potential.

In mid-2006, interest in YouTube at a fever pitch, Hurley agreed to give the keynote at Allen & Co.’s conference in Sun Valley. Hurley began by asking the crowd if they had ever watched a video online. A bunch of hands went up.

YouTube has carved a new market for online video entertainment. We have listened to our community and have built the most innovative and easy-to-use service in the industry. More than 80 million videos are being watched every day on our site … 60% of videos watched online in the U.S. are served from YouTube … YouTube has the largest audience in the Internet video with 20 million unique visitors, and we are currently ranked as the twentieth most-visited site on the Internet in the U.S., according to Nielsen NetRatings. More than 80 million videos are watched every day … The average person is on YouTube for 17 minutes a session … Every day 60% of videos are served from YouTube … Our nearest competitor has 17%.

They were acquired by Google for around $1.65 billion in stock in 2006. This let Google own the world’s second largest social network and the primary provider of online video. Since 2006, YouTube has been as synonymous with online video as Google is to search.

They bailed out, who knows if they could have been worth a lot more but let’s face it, that’s a solid exit. The bandwidth costs and the threat of legalities are only something a behemoth like Google would be able to stomach till they were profitable.

Saying yes to Google made sense in that it allowed YouTube to continue to grow without worrying too much about money. As Rabois said:

Tey deferred the monetization question and focused on the execution. They allowed the product to flourish

This is pretty funny, on November 6, 2013, YouTube began requiring that commenting on its videos be done via a Google+ account, which everyone hated… because Google+ (Who gives a shit?). An online petition got 240,000 signatures.

In response to Google requiring use of G+, Karim wrote, “why the fuck do i need a Google+ account to comment on a video?“, lol.

He then updated the video description on his first video to: “I can’t comment here anymore since I don’t want a Google+ account.”

Google then dropped its Google+ requirement across all products, beginning with YouTube.

You can see their original pitch deck here.