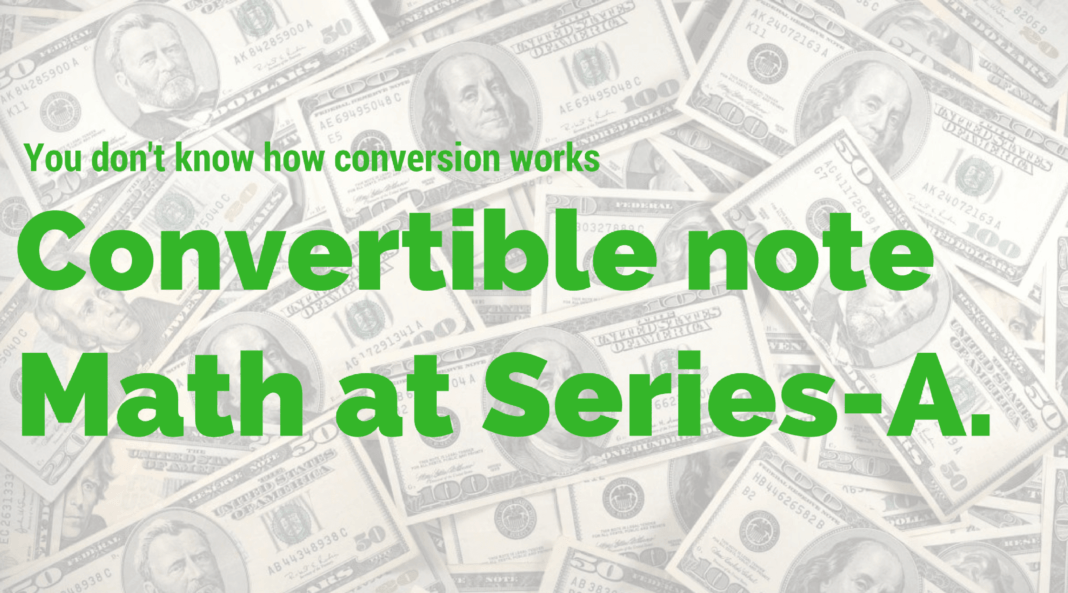 TL;DR: FREE convertible note calculator to calculate your fundraising terms and valuations. Learn how exactly the math works. NOTE: If you want it, it gets emailed to you automatically. Fill in the download box!

You’ve raised a convertible note and now you are hitting series-A. Time for those notes to become equity. Now convertible note conversion math is tricky at the best of times, but what you don’t know is there are in fact three ways that conversion can be calculated!

Huh? That’s right 3! Not the one way you presumed, if in fact you thought about this at all? In this blog, we are going to get into the math of conversion calculations and at the end of it, you’ll not only be smarter than a 5th grader, but smarter than most investors. 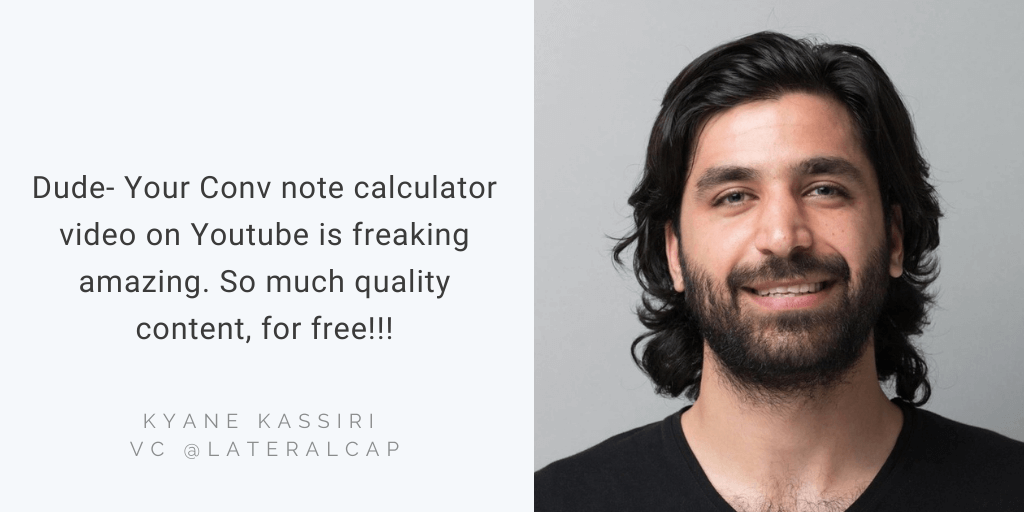 If you want to watch a video version of “How Convertible Note Calculator works?” You can watch below:

It begins. Your first angel round is typically a convertible note

You and your merry band of hackers got a product out, some light traction and attracted $1m from Angel investors.

The convertible note from angels is structured up as a:

You agreed that the convertible note is going to convert at the series-a (“Qualified financing”).

The series-A is happening! Time to convert the convertible note

Congrats, so you are beating the odds and ticking nicely along. You have been growing well, put together a good pitch deck (having checked out other super examples), pitched like crazy and got a term sheet from super top notch series-A investors.

The headline financial terms the series-A VC offered you are:

Now what? Who owns what?

For you to comprehend the math, you need to change your paradigm from headline valuation (pre or post money valuation) to that of a price per share (which is your valuation per share). As an analogy, if you trade and analyse public companies you note the EPS (earnings per share) which is the net income per share. Though we need to think about the company valuation per share now.

So now you have your series-A VC and have agreed on a valuation, how do you calculate the price per share I mentioned for your Series A financing since that’s the basis for the math?

To calculate how much the Series-A VC has, you divide $2m/$10m (investment over the post-money), implying 20% ownership post financing. If you hadn’t raised a convertible note, then math is simple. The series-a price per share is $8m (the pre-money valuation) divided by 1m (founder shares). The price per share is, therefore, $8. This results in the VC owning 20% of the company, and the founders with 80%.

Adding in the ESOP

But as you will remember, the VC asked for an ESOP pool (make shares to give to staff) of 10%. They want there to be a pool of 10% post investment NOT before! This is important as the math works out something like you need to make an ESOP of 14.3% before investment to end up with 10% post-investment. All the dilution falls on the shoulders of the founders. This means you own ~86% before the investment, not 100%. I’m setting this out clearly so you understand how much a big ESOP pool will burn a hole in your equity pocket!

Tip: make the ESOP as small as possible and all you will need to hire staff till your next fundraise! Negotiate with a hiring plan

The result of this is the founders own 70%, 10% for ESOP and 20% for the series-a VC. The ESOP effectively reduces your price per share from $8 to $7. Your post is $10m, so deduct $2 for the raise and $1 for the ESOP (10% of $10m post) and that gets you to an effective valuation of $7m. Divide that by a million shares and you are at $7 per share. Math also works out if you recursively calculate the number of shares you need to issue to the ESOP to end up with 10% ownership post raise, so the denominator is a larger #shares and you divide $8m by that (It’s easier to see in the model).

Now the fun begins! Convertible notes converting into equity is not simple at all. It’s not simple if you assume there is just one manner to do this, but this post is to teach you there are 3 ways to do it. Yeah, party population us x3 ;).

There are a few things to understand to make this a little less painful to process:

Time to put on the boxing gloves

Since no one knows how the f*** all this works (or don’t want to know) if someone thinks math should work a way another doesn’t, there is trouble ahead if they check.

You as a founder want the best deal, and the angels and VCs want their pound of flesh (at least some VCs will understand this – most won’t). There are three different ways to calculate the conversion, so best you know how it works to optimise for your outcome. We’re going to walk through how the math for the conversion works now.

Let’s get our geek on!

Importance notice: If someone smarter than I (which is most people) finds errors, let me know so I can fix. The model is complicated and I didn’t build error statements for every variation since the formulas get tricky and it will be hard for you to follow. If it blows up because you decided to make a $0 cap, don’t complain. The point is to show the math if you have convertibles.

To start off, here are the three ways to calculate the convertible notes:

This is what you want to ‘assume‘ and convert at (until someone notices and complains). It’s the most founder-friendly outcome. Why (other than the fact you get the most equity)?

Your dilution here is the least as dilution is shared. This is probably the most common method for conversion, but obviously, investors don’t like it since it results in them having less ownership than that they thought.

The pre-money is fixed ($8m pre ESOP and $6.86 post) here and the conversion price for angels is based on that, meaning your price per share doesn’t get smaller as with the other approaches. The pre-money method results in everyone sharing dilution with the conversion of notes in proportion to their ownership percentage.

Your price per share for S-A is $6.86 ($8m less ESOP of $1m divided by 1 million shares PLUS the number of ESOP shares you need to issue) and the conversion price for the notes would be $4.8 per share ($6.86 minus the 30% discount assuming it’s preferable to the cap). 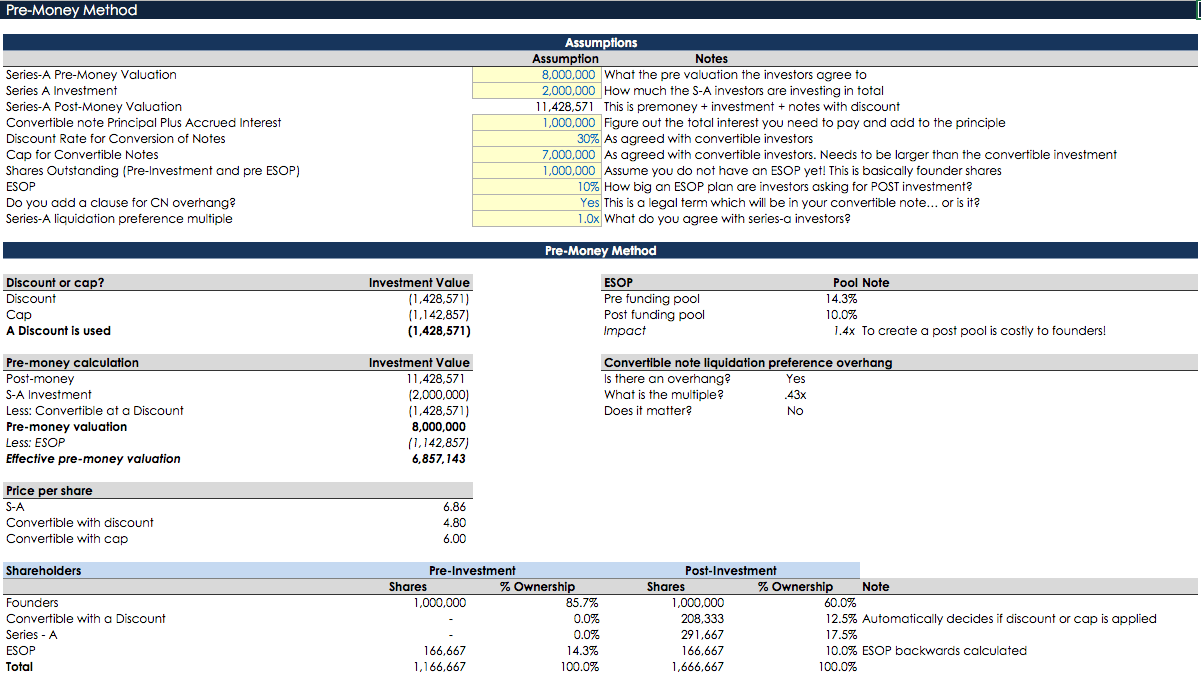 This method is not your friend as a founder since the post-money is set and the pre-money decreases to equate ownership. The % the VC is purchasing is fixed and the other variables are calculated on it. The VC basically says, I want my 20%, I don’t care what happens to anyone else, figure it out.

Here you take the pre-money of $8m, deduct the ESOP and the convertible to get your effective pre-money of $5.57. Yes, that’s a long way from your starting $8m!

The price per share for the VC is $5.57 per share and the conversion price for the notes would be $3.9 per share ($5.57 less the 30% discount since the cap is not in play). See the percentage ownership method in the convertible note calculator below. 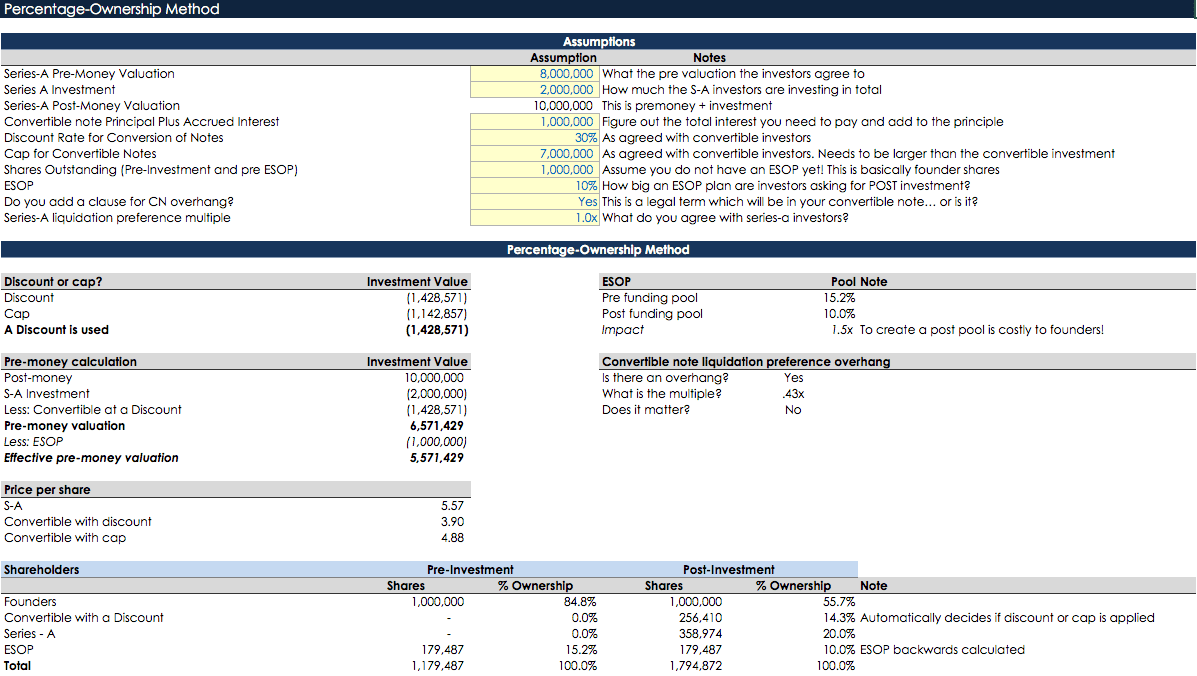 This is your compromise since everyone gets diluted a bit. You use this as a compromise between the pre-money method and the percentage-ownership method.

Here your post-money valuation is fixed to equal the agreed upon pre-money valuation plus the dollars invested by the new investors plus the principal and accrued interest on the notes that are converting. Using the assumptions above, the post-money valuation would be fixed at $11 million and each of the other variables would be calculated from that. In this example, the price per share for the Series A Investors would be $6.47 per share and the conversion price for the notes would be $4.53 per share ($6.47 minus the 30% discount). Sere the dollars-invested method in the convertible note calculator below. 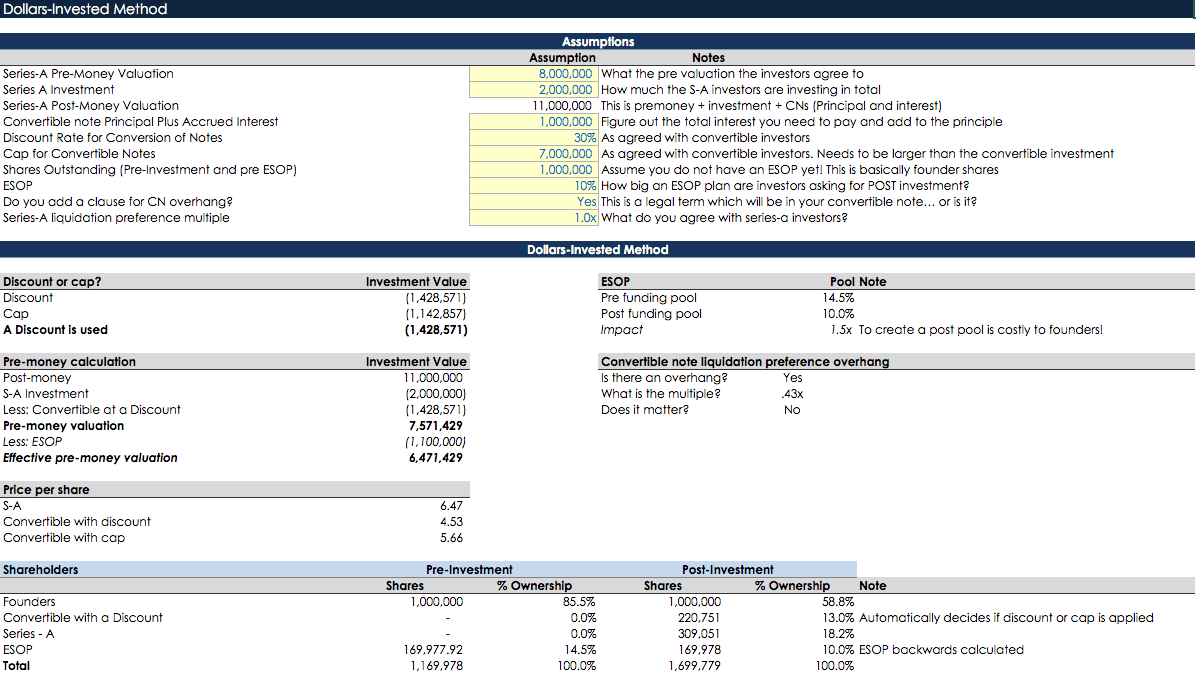 The dollars-invested method gives the Founders credit for principal and accrued interest on the notes that are being converted into equity as if these were funds being newly invested into the company, but only the Founders are diluted by the “extra” shares that the noteholders are receiving due to the conversion discount. The rationale is that converting debt into equity without a discount does not change the Series A Investors’ percentage ownership of the enterprise value of the company, so they are still getting the deal for which they bargained. The Founders have to compromise and accept some additional dilution, but it is significantly less than what they would suffer under the percentage-ownership method.

The hardest part about calculating the price per share in a Series A financing of a company that has convertible notes converting at a discount is that it effectively re-opens the discussion about the valuation of the company. Each party may have thought they had an agreement and now one (or both) needs to compromise to get the deal done. Hopefully, this article has helped you understand some of the different options for solving the problem so you can tailor your approach accordingly.