Note: I’m writing a huge course about pitch decks and I’m sharing useful concepts. They won’t necessarily all make sense if you’re not in the course!

Are you fundraising? Check.

Are you dealing with the fun that is pitch decks? Check.

Are you losing your absolute shite? Check.

This is a blog for you.

How I came up with the “fuck and shit” principle

I’m working with a pitch deck client called “Jane”. She’s an executive in the media industry in Tinsel Town. She told me a funny story about how she once almost drove over an a-list celebrity in the film lot. I’m not a star fucker, so I don’t ask too many questions, but I had COVID and to make me feel better she was messaging me and mentioned I needed to ask about “that story”.

Jane is starting her new company. She’s climbed the ladder in corporate land and that takes a certain personality and way of communicating. The issue is that doesn’t work when you’re writing a pitch deck for investors (well, tbh for anyone, but you care about money so let’s focus on that).

Jane is a “nice girl”. She doesn’t offend and she sure as garn tootin’ doesn’t curse.

Jane is stressed all the time. All her colleagues and contacts know she is quitting her high-paid job and they keep asking her if she is crazy. This doesn’t help. She’s so in her head it’s crazy. She needs to make sure that this new venture goes well, starting with raising that seed capital to get the venture going. Pressure, pressure, pressure.

Jane can’t get to the fucking point

The way my methodology for writing pitch decks at Perfect Pitch Deck works is (short version):

Jane is in stage 2. We’ve come up with a story she believes she can tell, it suits her way of talking and she feels confident.

There’s a problem though. Jane can’t get to the fucking point. I tell her to write about World War 1 and she writes about World War 2. Sort of the same thing, but not nearly as relevant and important.

After many monologues to educate and inspire (I fucking hope so anyway) Jane starts forming an interesting epiphany of sorts, at least to me.

We go through 3 calls with little progress and it starts making sense to a turning point. Jane starts cursing like a sailor.

Jane goes on a rant turning shit and fuck into a verb, noun, transitive verb, adjective, and the rest of the English class.

When you replace fuck and shit with 80% of your vocabulary, you get out of your head to use fancy language and just say what you actually are thinking as you are thinking it by reducing the cognitive processing load. You’re focused on getting to the fucking point and not picking the right words.

Writing your deck involves getting to the actual point

Why do most startups have shitty pitch decks and have so many issues making a deck they love?

My methodology is about writing a 1/ story then, 2/ proving what you say.

So let’s say you have written a solid story (it’s hard), now you have to prove it (part 2).

If I say “It’s obvious, insurance growth in the USA is the highest“, how do you prove that?

Jane talks about how COVID is impacting insurance presently.

Is that answering the question?

No. It fucking isn’t.

Get to the fucking point.

I want one graph showing gross written premiums are bigger than other countries. 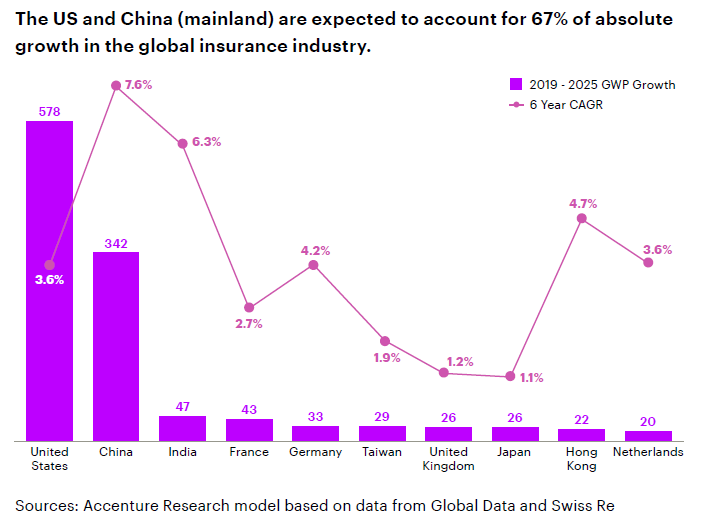 There you go. Rape the shit out of that and format it natively.

You’re in your head / too corporate

Reprogram yourself by swearing. It helps!