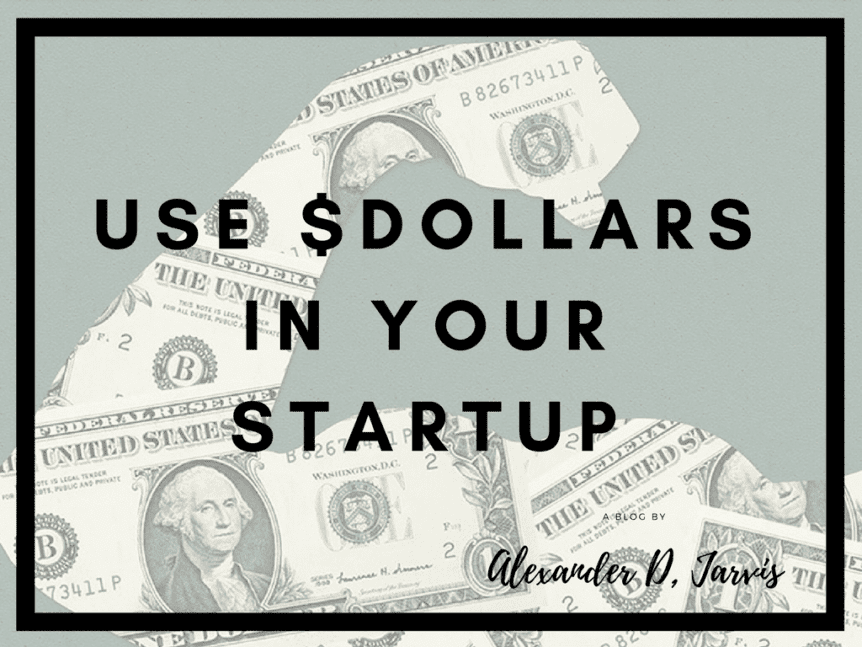 Tl;dr: Use US dollars whenever you talk or do something financially. It’s just easier

I’ve made a lot of fundraising models and they get used by people in all sorts of countries. So unsurprisingly I get people in Europe saying ‘The model is in Dollars, how do I make it all Euro?’ (Tip: use this Excel addin)

That’s not a dumb question at all. It makes sense, you hire people in Euro, you may even charge in Euro.. but honestly, using Euro or even Ringitt for the purposes of financial models doesn’t make sense (generally).

I’m going to tell you why. Yes, I know some people are going to disagree, so feel to sound out in the comments, but this is my blog. So tough 😉

No one likes math

Do you enjoy math? No one really does. It involves thinking. Thinking is always bad.

So what do you think is going to happen when you are a founder in Malaysia and attempt to offer your potential head of marketing a RM 30k salary? She’s going to say “what’s that funny money mean in something I understand?” Lol. I lived in KL, so that’s why I’m picking on the Ringgit ;).

You need to convert that into an international currency. If you say Dollar, Pound or Euro, then it’s just a +/- 20% everyone can sort of figure out without checking FX rates, instead of having to be told to divide everything by 5.

So, do you in principle agree that at least for less common currencies/countries, it would make sense to talk in terms of the big currencies?

Well if you agree to that, wouldn’t it be logical for everyone to just pick one?

Dollars are understood by everyone

In my view, the US Dollar is still the language of investment. Let’s face it:

There really needs to be a currency everyone thinks in. Pounds, eh, ok. Euro, sure, it’s definitely a solid choice. Swiss Franc, well we just use that to correlate gold prices. Bitcoin cash… lol. So to me, it’s really between Euro and Dollar, but when you go to Africa, LatAm etc street vendors are taking Dollar not Euro.

I don’t have stats on this, I just have interactions to recall. When I talk to VC friends casually I can’t think of a time someone said they invested in Euros. It’s all ‘X just did a $42m raise.’ Sure, I bet when the UK funds do seed stage, they talk in terms of Pounds, but once you start doing S-B that’s going to start shifting to $ as there are going to be foreign (read American or even Russian) investors getting involved.

When investors talk about their fund size, most talk in terms of Dollars, especially since all the big tech blogs report in $.

Here’s proof, look at what I quickly searched: 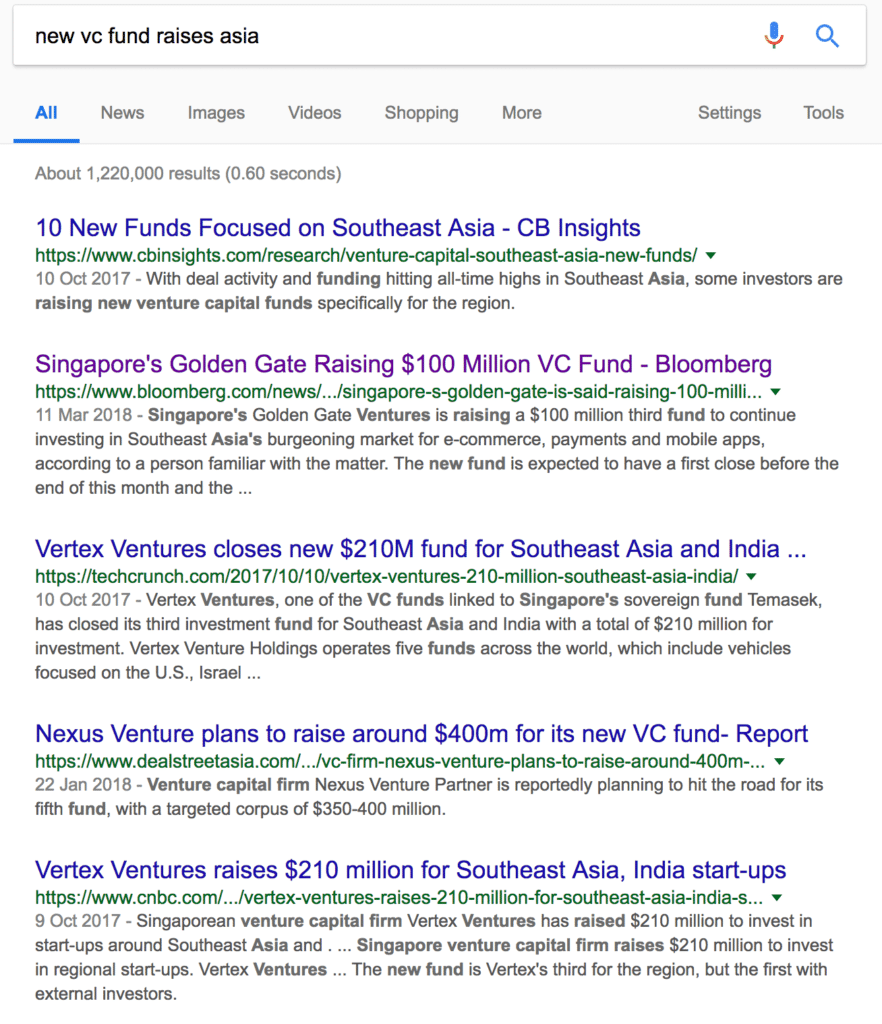 Do you see anything other than $?

Now as a founder raising, you’re going to ask for $ in your deck and have a financial model. If you use Ringitt in your model, that’s only useful to anyone in Malaysia. Let’s be honest, no one really cares and there’s basically no investors in Malaysia. You’re for sure going to be raising from the VCs in Singapore. Yeah, most know the conversion rate, but come on. Wouldn’t it be easier to use Sing Dollars then? If you’re going to do that then why not just use Dollars?

Also, if you’re going to benchmark the price of staff to other countries, no one is going to quote in Ringgit, right?

You need a currency to operate with if you expand internationally

If you are in any country other than the US you HAVE to expand. Actually, that’s a lie; the same things apply to China. They are the only contiguous land masses where you can get to ‘unicorn’ land in one country. For everyone else, you are hiring for a ‘Head of international’ around Series-A time, right?

I’ve helped build some large companies with a lot of countries in operation. Without exception, every group reports in ONE currency (Eventually). If you are in Australia, you convert to Dollar (or maybe Euro). At one company we used Euro for (most) central discussions. It’s fricking annoying running your ops in local and having to convert to another currency.

I remember being on a group call at that company for the first time and being shouted at by the CFO for reporting in Ringgit, “Euro, Euro! Tell me numbers in Euro!“. I was like “What the fuck! We do all our reporting and set all our targets in Ringgit! How am I meant to convert a series of numbers on the fly.” Needless to say, we made sure to have reports to hand in Euro for the purposes of central discussions. It takes time for things to get organised centrally when no one is really paying attention.

But why do you want to have one currency everyone thinks and reports in?

It’s sort of obvious, innit? You need to compare everyone’s performance. You need to make people feel like crap if they are bottom and people feel good when they are on top to create competition. Only, that’s harder if everyone is not able to see things in black and black.

There’s a tonne of other reasons, but let’s not make the blog too long.

Your competition is probably American

Be honest. You’re copying a US company aren’t you 😉 Ok, maybe you are actually doing something innovative for once? Fine, but who are your competitors? Or… who is going to buy you?

Do you know what currency ze Americans use? Dollars.

No one knows how to really price product, right? You sort of look what everyone else who is a bit like you and then copy them. Then after a while you mess about and see if you can charge more, or need to charge less. So scientific 😉 But who are you really going to be benchmarking? Americans.

Hey, if your selling into America, what currency are you putting on your website? Or actually, even if you aren’t focused on America, but regionally, you need to have one currency unless you are a bit fancy and have geolocation to dynamically change prices. So what currency are you using? You’re not picking Indonesian Rupiah are you? There’s just way too many zeros, ha!

Everyone has a goal to raise in America, eventually

Every founder has a goal to raise from the big US VCs at some point (Other than maybe China, but the yanks like KPBC have local funds). What happens when you raise in America? Yeah, they think in Dollars.

Sure, you’re going to have to set up a Delaware C-Corp etc, but no one really cares. You think it’s easier to raise larger amounts at higher valuations from ‘smarter money’ so everyone would like to do it.

If you are going to spend a month making a model now, wouldn’t it just be easier to do it in Dollars now, then have to go through the massive pain of reformatting the bloody thing into Dollars in a month’s time?

There are always exceptions to the rule I’m sort of making up.

In short, it can make sense at the very early days when you are doing angel. If you are doing an angel round in the UK, you know all the angels only care about SEIS/EIS tax incentives. They want their allocation and the gov reports in Pounds, so you should use pounds in your deck at least. Yes, I think it’s ok to do your model in USD, but your deck for tax purposes should be in Pounds.

If you are in Paris and only raising in Paris, then according to feedback from 3 French founders, the angels actually think in Euro. So use Euro.

If you are German and expanding from the fatherland than Euro may actually make sense. I’m not totally convinced, but I asked a dear kraut friend of mine:

I think as long as you keep it consistent it’s fine to use dollar. Although it is weird if you’re a company from Germany that raised from non U.S. VCs to use dollar but I’ve seen it before. If you have not raised from international VCs putting it in $ would be a bit weird though.

If you don’t have grand plans of expansion, then do local.

So, closing on financial models

I think this is a balanced, compelling argument for using Dollars. I have no ties to America, so I really don’t care. Just saying.

So just a few thoughts on why I build financial models in Dollars.

Ultimately, you need a common currency if you have scaling ambitions. So pick Dollar or Euro, but think about these things. It’s an ostensibly small thing, but there are a tonne of ramifications long term. Think about every report you write, every SaaS system you rent and setup and how you choose a currency in it.

It seems so silly, but it really is core to how you think, operate and communicate with your stakeholders.

What are you going to use?

If you want to watch the video version of ”How to use dollars in your startup?” You can watch below: