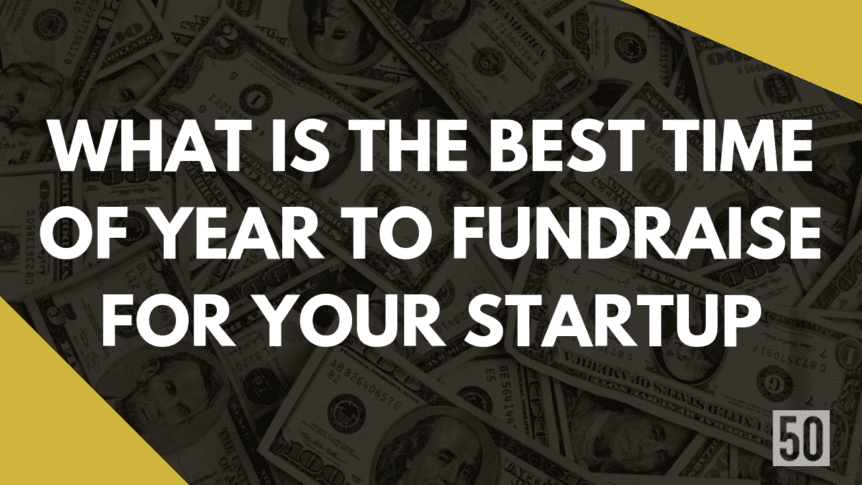 Are there good and bad times of the year to raise for your startup?

One data set says it doesn’t really make a difference, another says there are better times, whilst general VC wisdom supports there are months to avoid.

We are going to go through them and you can see the data and wisdom from various venture capitalists.

Whether you have the luxury to control your fundraise date is academic, so it’s futile for me to waste your time explaining this. You know yourself when you have to raise (because you are running out of cash).

Fred Wilson (VC at USV) backs up the point:

If your company will be running out of money at or before year end, you should be raising money now. Do not let anyone convince you to wait until “everyone is back from the beach in September.” That is too late. Do it now.

This blog applies to your traditional and established VCs. Angel investors can do whatever they want, and smaller firms (maybe one or two partners) will likely be a lot more nimble. Mileage may vary.

Why would there be seasonality for fundraising?

There’s a rule of thumb batted around the valley that the worst times to raise capital are in the dog-days of summer and after Thanksgiving.

Mark Suster believes the dead times (In the US) are:

It is very difficult to raise venture capital between November 15 — January 7th. It is also very hard to raise VC from July 15 — September 7th.

Fundraising works with you meeting a partner or a junior, meeting another partner (or 3), a full partnership meeting (where they all agree) and due diligence.

The final part is the issue. Getting the full partnership together when people are on holidays is difficult. If firms use experts to do DD, then they can be hard to get hold of too.

This is not to say that VCs aren’t working. They’re reading emails, they’re just not as available.

Techcrunch did some analysis in 2017 for 6 years between 2011 and 2016. The aggregate data suggests there isn’t really seasonality. 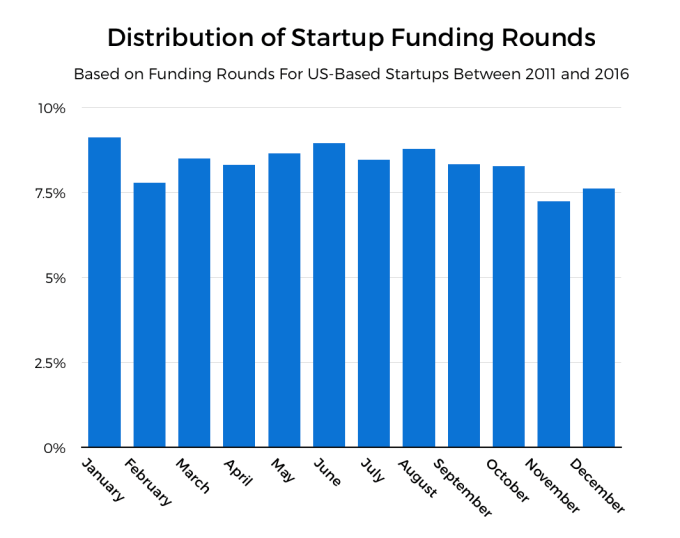 The Y-axis represents the %of deals announced in a given month.

If there were a truly even distribution of deals, all bars would be at the same height at 8.33% (equal to 100 percent divided by 12 months of the year).

However, that’s the aggregate, the actual data is all over the shop. Here are all 6 years. 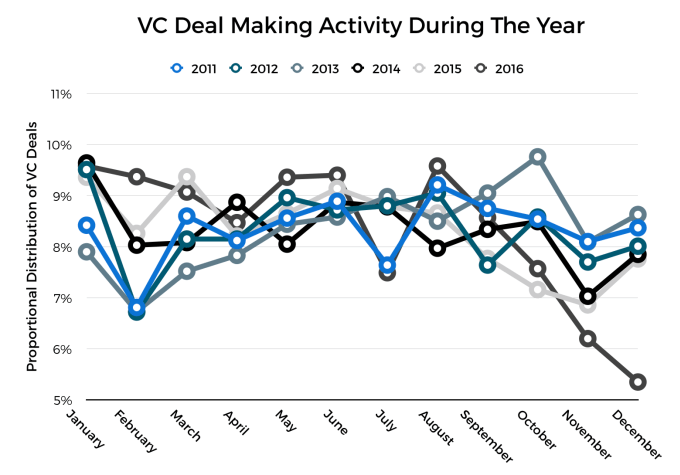 Note: Charts are based on Crunchbase data for more than 43,600 venture capital deals struck between 2011 and 2016, with companies based in the United States. It is sector, stage and geographically agnostic.

Mattermark did an analysis and didn’t find that much of a difference either.

What does that tell us? That in any given year, VC investment activity will rise by an average of 18% between Q1 and Q2.

This may sound like a big bump, but in absolute terms, Q2 accounts for only a few percentage points more than Q1. This gap between Q1 and Q2 may also be influenced by the way we cleaned our data prior to aggregating and charting it. 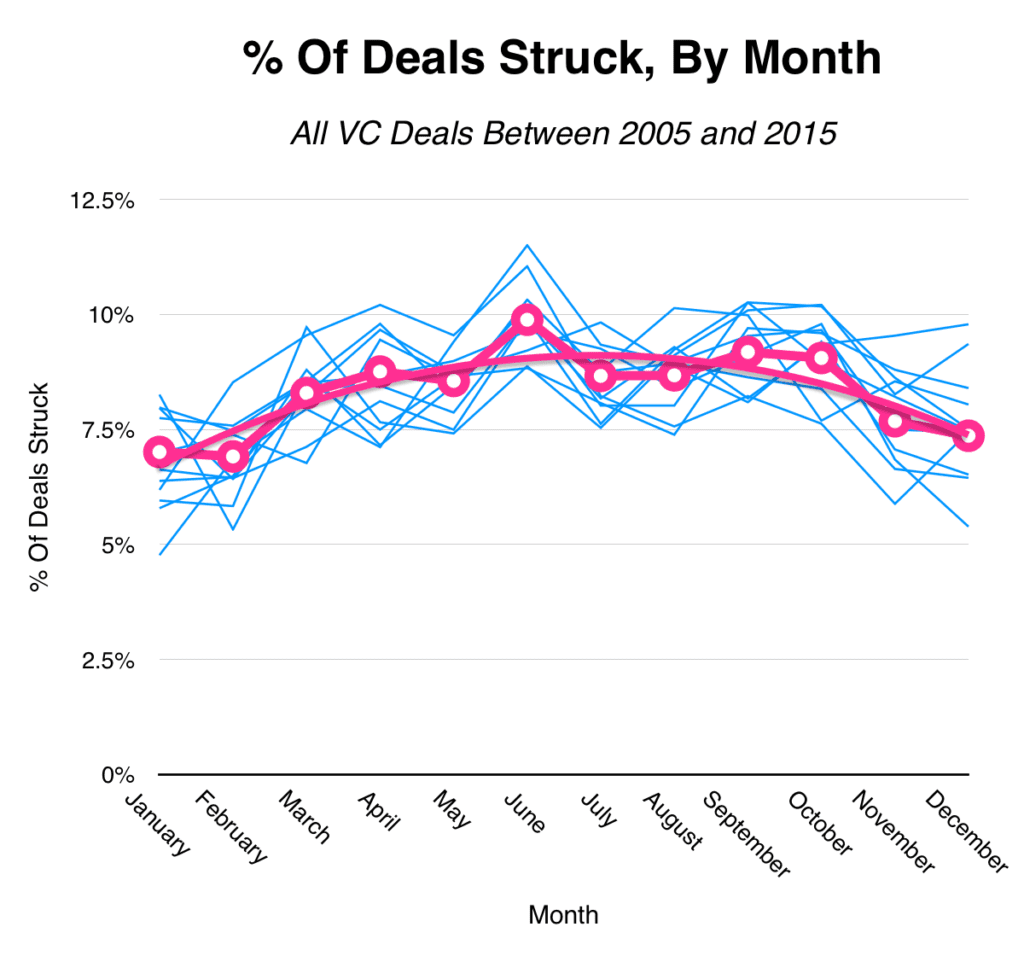 Fred Wilson thinks summer is a fine time to raise.

I suspect that if you look at the VC industry as a whole, and there are plenty of services you can use to do that, you will find that there really isn’t a summer slowdown in investing activity.

You might have a better shot at getting their attention.

He has done more deals in summer.

Eight out of twenty-seven is thirty percent of our portfolio, and that is north of the twenty-five percent of the year that the summer represents. So our firm has been more active on new investments during the summer than we are on average.

Investors can be more receptive.

If you extend your timeline by a month or so, dedicate a bit more effort to scheduling and quarterbacking the process, you will find a receptive audience with their checkbooks open.

He cautions founders to take care to plan more though:

Tom Tungez did his own research on CrunchBase too.

First, the impact of the summer is evident. The slowest months for fundraising are January-March and September.

VCs invest more and more as the year progresses.

VCs aim to invest a certain amount of dollars and/or in a certain number of companies each year. The later in the year, the greater the time pressure, the better the motivation.

VCs do bigger deals at the end of the year, not the start of the year.

Third, the difference from the best month, December, to the worst month, January, is substantial: a 50% delta in the total dollars invested and 50% increase in the number of investments. These differences are statistically significant with greater than 95% confidence, so seasonality quite clearly exists.

August and December are deal spikes.

The data shows the average investment size spikes in August and December, both of which have over the past nine years, generated 15% larger rounds. The difference is statistically significant with greater than 90% confidence.

He advises starting your raise in September for a December close. The second best option is May for an August close.

Assuming a three month fundraising process, the best times of year to start a financing process is in September, targeting a December close, when investment sizes are 15% larger than average and investment volumes are 50% larger. Starting a raise in May is the second best choice. While the average investment sizes are identical to December, investment pace is much slower, hence a bit riskier. 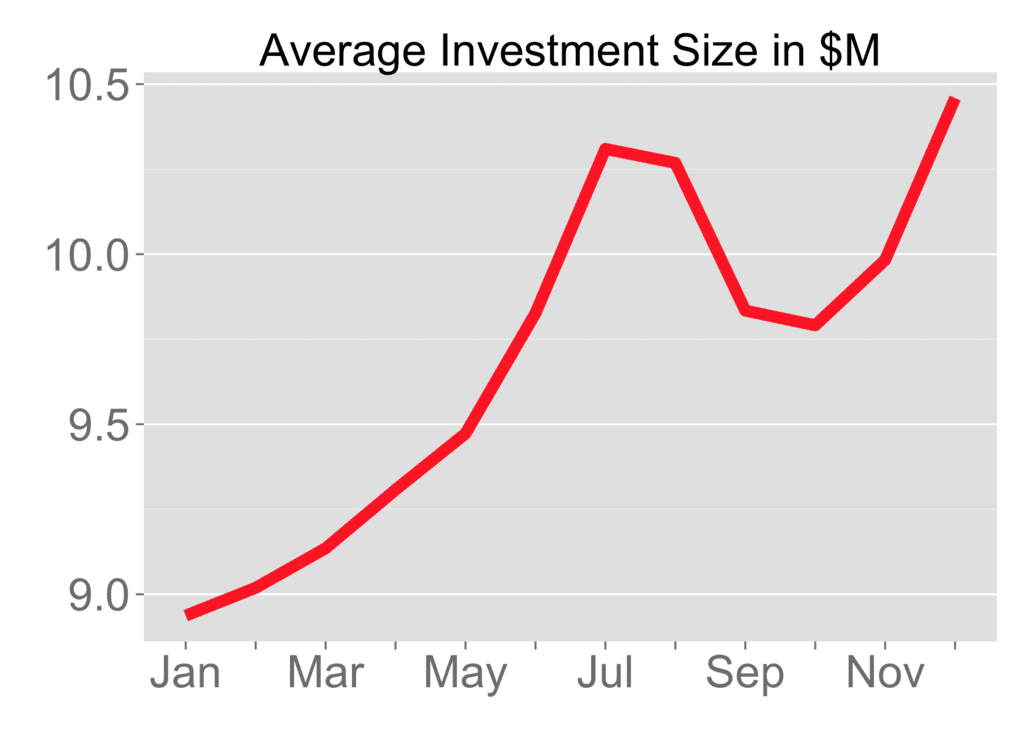 Mark Suster believes in seasonality. He doesn’t back anything up with data, he just knows everyone goes on holidays.

In my experience, there is some truth to that. A lot of people in London are on holiday in August.

He believes these are the times to start your fundraising:

I don’t really think VC is seasonal. Supply and demand for capital is, on the whole, not seasonal.

September and May are probably your best bet to start.

When I talk about starting your raise, I mean really running a process with conviction. You can build relationships with VCs all year and if they will meet with you, do that. Just say you aren’t raising till you really are.

Finally, the best time to raise is before you run out of money and when you are really ready. Don’t raise when your business is entering a seasonal period as your metrics will be affected.

The better question is when is the best time for you to raise?