Startup is hard dude. Whatever the stats. Arguing about the small stuff is pointless.

Couple of reasons startups fail are:

Here is what Forbes think 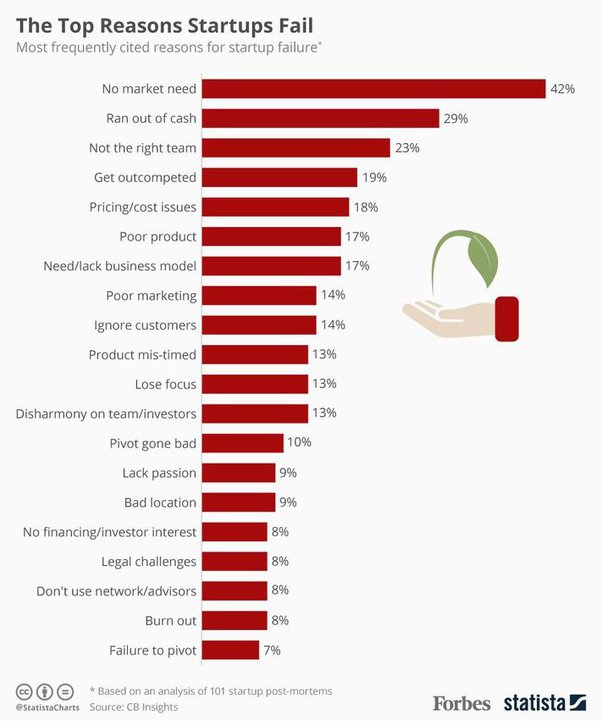 Here is what CBInsights think

There are a lot of things you can do to preempt failure.

If you aren’t a nerd, you don’t know what to do.

I was out on a date last week with a model who is setting up a startup in sextech sector (it turned out). I gave her some advice about how to start and she said “Well, I’ve spent a lot of money already. The tech is hard. So that would have been helpful before I started spending money.”

I still told her to get to market and fail faster.

Failing fast is so key.

Your idea is crap till it makes money.

Remove your ego from your idea. View it as a test you are not committed to until the idea becomes something to commit to.

Realistically, you only get a AAA exit if you are a AAA person.

The idiots you see are survivorship bias.

Eventually, a million monkeys will write the complete works of Shakespeare.

You can totally avoid failure.

You need to know a lot to know why things won’t work. I teach founders this all the time.

The thing is, sometimes crazy shit works and you don’t know why. That’s why I always keep an open mind….

So long as the fundamentals are there.

Read these to get smarter.

Passion is over-rated. Build a better mousetrap instead

Is there a structured approach to finding a great business idea for a new startup?

The real reason launch a startup faster (not talked about)

How do you validate a startup idea?

How big can this get? Market sizing has killed many startup fundraises

Your solution is not my business problem