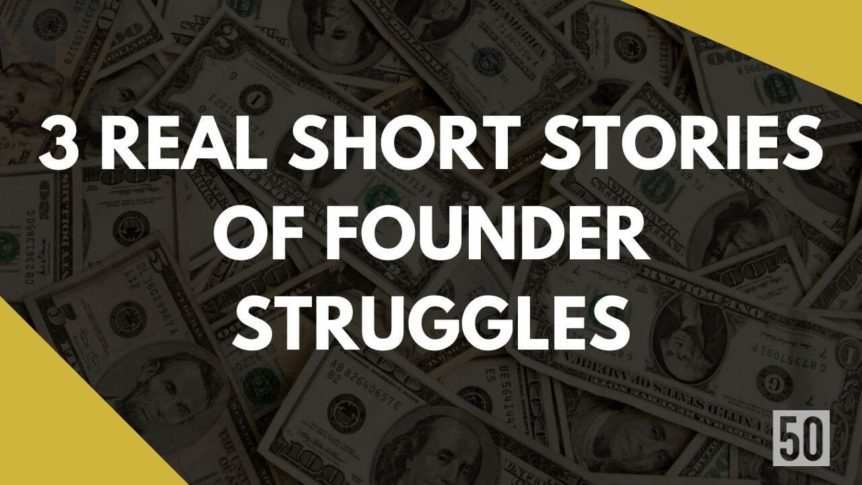 Tl;dr: 3 real stories from founders on facing do or die struggles in my words. I don’t normally write inspiration blogs, so this is worth a read.

In 2018 it just so happened I had a lot of calls and meets with amazing founders which got me thinking. In every meeting, the founder had their own unique story of misery and frustration. Some are valued at $50m+, others are looking for their first round and in between.

You think it gets easier as you get larger and have more funding, and that is a lie.

It’s never easy till you have sold 😉

Let me share three short stories with you. There is no specific learning other than helping you realise the struggle other founders are going through so you know it’s ok and it’s normal. When people say everything is ‘awesome’ it’s a total lie. I believe it is important for you as a founder to not feel overwhelmed by your stress, and understand everyone has it just as hard as you. Only, we don’t tell each other that.

Media company in Asia closes that key round

With only 3 months of runway left, ‘Mary’ joined as sales head. She then took over as the CEO.

She believed in the opportunity (she could have been paid a lot more in another job) but the company ticked all the WRONG boxes. Hit driven, capital intensive, bla bla. No VC would touch them, and frankly, no one really understood the business.

Normal people would have quit. And yes, she wondered what the actual fark she got herself into!

She proceeded to hit up everyone she knew and then randomly (I think it was her a brother in law) got an intro to a non-normal investor who then pulled in friends. She managed to raise near $10m for a company with not much revenue and weeks left before she would have to shut down.

You can do it if you hustle like a beatch, even if it seems impossible.

This reminds me of a medical company in SG that pulled this off too. Great founder. I talked about his raise and my VC buddy said “Only ‘Jim’ could have pulled that off‘.

The best thing she said to me was “I have never executed so well and with such focus when it was do or die“. She said she planned every single month to the day with what had to be done. She then only did that with insane passion and focus. There was no fecking around.

Now they are doing well, but there isn’t quite the same pressure to perform. My view is she should apply 10x thinking and push to do more than is reasonable since the pressure helps her to do amazing things. Certain people need crazy pressure to be amazing.

One learning I have for myself is that I’m not always brutal in setting deadlines and goals for people. I’m such a muppet. I’ve learned that you need to set big goals and it will drive people to achieve them. If you suck at this, then figure out your goal and double it or increase by 50%. Communicate that without wavering and smile when they achieve it. Setting goals is still something I need to get better at.

Retail SaaS startup in the USA

I was writing a deck at www.perfectpitchdeck.com for an ‘older’ founder in the US. He was an analyst so he really knows retail. He was told by a really senior buddy (at a huge company) he needed to build a solution to help retailers. So he built that. He put in $500k of HIS money in bootstrap… Man, I have respect for people like that.

Now, this dude has done research for a living. He’s not an idiot. He researched the crap out of the consumer issues. Everything is backed up with data at a McKinsey level… Only…

He didn’t do as much DD on the people who would pay him… the actual clients.

Turns out retailers don’t give a shite about consumers… no joke. I can remember him going on rants about this over time as he learned more.

The idea I gave to him whilst debating is going to be his core business now.

The guy is obviously pissed, annoyed, stressed and ‘frustrated’ but he hasn’t skipped a beat. He saw what he was doing was not working and immediately decided to pivot. $500k blown and everything.

I just couldn’t get over how willing he was to get over the sunk cost and just focus on the new thesis of what to do now and pivot so rapidly. Sure, he was pissed off, but he was no less determined to make things work. Things are not going to go your way. How you respond to challenges is what makes the difference.

I just had a beer with an impressive founder that reached out to me as he worked with one of my startups in a coworking space in APAC and said he was in London. I mean, if you have heard of ‘founder/product fit’ this guy is it. He is so uniquely qualified to solve this problem it’s crazy.

His pitch is incredible. He has it down. He has stats for everything. He has figured out crazy shite, signing up companies you would think would NEVER do what he is doing! One of the largest companies in the world reached out to ask how he did it. The guy is relentless. Everything he says is so smart.

But… he can’t get funded (yet). He is in an industry that most investors think, yeah… feck that. The news that comes out day after day is against the industry. People just can’t see past it. Will the guy quit? Feck no. He moved continent (leaving family at home) to try raise now. Would you do that?

There are a load of dubious questions you would have about the industry, but it’s in an area that will never go away. -The industry he is in is just fecked. But additionally, there’s no reason he couldn’t be the Netflix of it.

Something a lot of founders get stuck with is that they don’t raise enough. He hasn’t raised much so you get the ‘do I do marketing or product? quandary’. He chose product over marketing. He has a product with a 4.7 on the app store… but… here’s the issue.

His MRR isn’t huge. He didn’t have the cash to promote it.

When you challenge conventions with people who may feel burned by it, the only way to overcome is proof through metrics. You need money to get metrics… FML

I have experienced the same with a founder in SG who had the same dilemma. He chose sales, got the #s VC wanted, but then investors thought the product wasn’t good enough… I know it is frustrating. This is why fundraising is so important if you go down that path. I highly recommend using my future fundraising model to understand this better and to plan your raise.

I’ve met this guy and I’m like he is a baller. He says his metrics and I’m like, ummmm, you should be bigger. But he isn’t bigger as he doesn’t have marketing budget to spend.

This guy is a mother fecking cockroach though. He is not going to quit. Drop a fricking nuclear bomb and that cockroach is going to keep going.

He mentioned some VCs he reached out to and got a pass. A lot just read his deck and think feck this industry. I normally tell people to send deck first and screw the ‘I just need to get in the room thing’ (Read: how to get warm introductions) This is the first exception I have come across. VCs hate the industry, but if you meet the guy… he really has a shot to convince. My advice is he has to get in a room to pitch. That’s not easy, but I’m going to ping some friends and tell them they need to meet him and reserve the reservations. I would rarely say that, but there are always exceptions.

This is a weird post. I don’t know that I have real learnings for you, I don’t have some BS point to sell either. I just happened to have some amazing, dedicated founders talk to me week and share their story and I am in awe of their commitment.

So, if you are a founder, you should know the shite you are going through is normal. You can find a way through. It will always be hard, but it’s worth it.

You don’t get rich and famous by doing the things normal people do.

I respect you for what you are doing. Keep doing it even though you get depressed.

You are not alone.