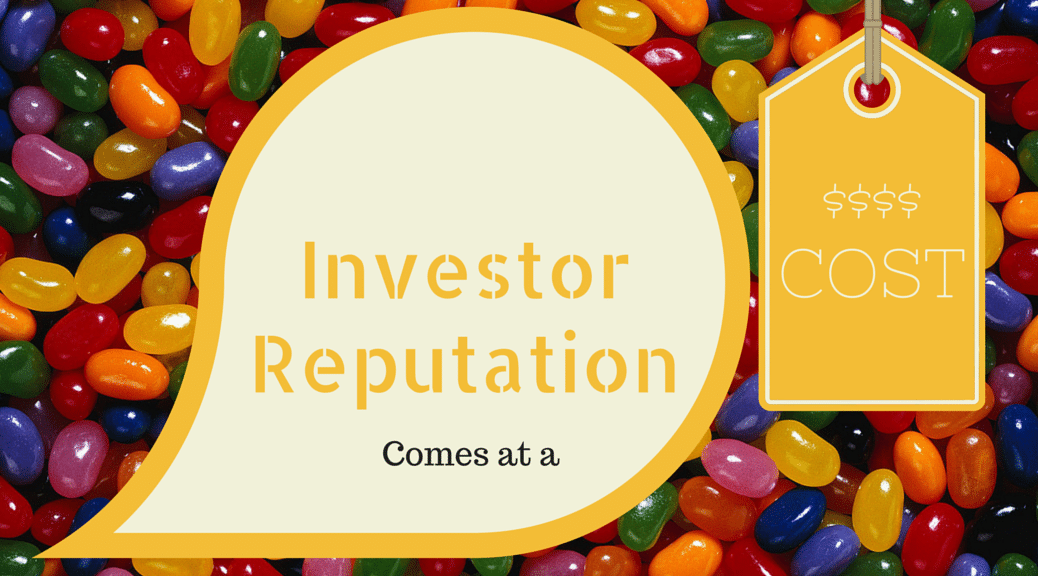 Dictum meum pactum is a phrase I learned in high school whilst writing essays for my application to Oxford University and it is the first thing that comes to mind when I think of reputation. It is something that I have oft found not possessed by people, and nor understood, both figuratively and literally. It means ‘my word is my bond’ and it has been the motto of the London Stock Exchange since 1801.

Early on in my career, as a wet behind the ear, but enthusiastic banker, I rapidly realized idealistic principles were not widely held beliefs. This is something I have never adapted to and it has cost me. A VP once said to me “What is with this loyalty to the firm when the firm is never going to be loyal to you?” I don’t recollect responding, but it is something that has stuck with me and I never came to terms with.

During Premoney (An investor conference in San Fran, Jungle just organized the Asian event in Singapore) there was a closed room discussion about angel investing. A topic we got into was dealing with tough situations with founders. One investor posed a situation, which was almost rhetorically responded: “Your reputation comes at a cost.” That is fairly profound when you ponder upon it.

Your actions in the startup investment world have consequences and I am certain startups are not aware of this fact, and that most investors haven’t considered this fully, so let me expound.

These are all real examples, and no I am not giving details, and yes I will call people for references whenever we look to do something- everyone knows everyone so you will hear of impropriety.

The startup world is a small one and word travels fast in the connected world. I know a few charlatans in Asia and you can be sure that both founders and the investment community are aware now. We do not need bad seeds spoiling the well at this nascent phase of development in Asia.

There are going to be opportunities when you can make money by doing something not quite right. Heidi Roizen, Operating Partner at DFJ wrote about a case when she was a founder and water damage from a faulty sprinkler damaged worthless paper in a store room:

But Royal and I knew that the destroyed products were the old, soon-to-be-obsolete versions.  And all those art masters, they were for the old product too.  Truth be told, it was all pretty much worthless even before the downpour.

We pow-wowed about what to put on the spreadsheet.  The landlord did not seem to care what we asked for because he was insured.  The money would be hugely helpful.  What harm would it do to inflate the value to retail?

But we knew that that would be a lie.

And more importantly, every other employee would also know it was a lie.

So we told the truth to the landlord, and hoped that our honest deed would in turn make him more lenient about an upcoming lease renegotiation (which I believe it did.)

Why did we forego the easy money?

Because, if you lie about anything in front of your team, what does it say to them about how they should behave when faced with their own dilemmas?

To me, it says, lying is okay. Go ahead and steal a hard drive if you need one for your personal use.  And take your friends out to dinner and charge it as a business expense for a client who wasn’t even in town.  We cheat, so you can too.

We did not want to run a company where cheating was a way of business.  So we told the truth.

Here the short term benefit of ‘early-stage capital injection’ would be very much needed was weighed against the future downside of jaded and dodgy employees through examples set by the CEO.

It is not hard to leap to how this applies to an investor. You have an opportunity to screw founders and get more equity to increase your returns to your LPs for your next fund, so hey why not? Well, those founders and the staff are going to talk and chat moves at the speed of social these days.

As a senior person at a global company said over drinks last week, “no one is going to be candid and open at an event. All it takes is one idiot to tweet and it is game over.” Why do you think management at companies in the public eye get so much media training and are so boring in interviews?

The simple reality is, it is hard to screw people over these days and not have other people know about it. What you do in the short-term echoes to the afterlife.

I know some incredibly gifted people that are always going to have barriers to raising money as they did some unethical things. It is a huge shame as these people, if more honest, would make a dent in the universe.

The way the VC business works, you make money playing a long game, raising successive funds. One may be able to get the next fund, maybe the third, playing close to the wind but eventually your actions will catch up with you, particularly as you become larger and more talked about, and your reputation becomes called into question. It may be ‘harder’ to get short-term goals achieved by not being unethically opportunistic, but if you want the full value you are going to have to make hard calls and play straight. That’s the hard thing about hard things. It takes a lifetime to build a reputation, but only a second to lose it.

Does a good reputation actually pay off?

Quantifying beyond anecdotal evidence and survivorship (+ bias 😉 ) that reputation and acting appropriately pays off is naturally hard, particularly faced with skepticism.

If founders expect to be screwed, why not screw them, right? A 2012 report from Coutts, entitled “The Price of Growth”, suggests entrepreneurs have a much more distant relationship with venture capital than the one portrayed by the media or that expected from investors.

The key findings were:

Source: Coutts, The price for growth

The last point is key. Less than a fifth of founders believe VCs have a good reputation. Shit.

However, in an academic paper (Venture Capital Reputation: A Survey) the authors found that reputable VCs select better companies and add more value, as follows:

The primary finding is that a VC’s past market share of VC-backed IPOs consistently shows a significant positive relation with the probability of future IPOs as well as with all four post-IPO issuer long-run performance measures we investigate. This result holds after controlling for VC backing, VC banks, underwriter reputation, and issue and issuer characteristics. We also find evidence that more reputable VCs select stronger portfolio firms.

However, the relation of VC reputation to firm performance continues to hold after adjusting for self-selection using well-known approaches. Thus after taking VC selectivity into account, strong evidence is found that more reputable VCs do add value to their portfolio firms after they go public.

‘Select’ is not the most supportive word for arguing for reputation here. But there is a solid argument that reputable VCs get access to the best deals, and that is hard to argue with.

Investors need to take care with whom they invest in too

Beyond how investors choose to treat founders, they also need to be careful whom they bring into the portfolio fold, “When you lie down with dogs you get fleas.”

Sales teams to hit targets (set with investors in the Bplan) can overpromise and underdeliver. Customer care teams lie about the state of the NPS. The CFO overstates the P&L to get the next raise believing the end justifies the means. All these are ultimately short-term strategies, not long-lasting ones that robust in a great exit.

Warren Buffet of Berkshire Hathaway said it best: “In looking for people to hire, look for three qualities: integrity, intelligence, and energy.  And if they don’t have the first one, the other two will kill you.”

Building a reputation is a hard thing to do, but to me, it is something critical. When meeting a founder in a business which may be similar to our portfolio (where there may be a conflict) we always state our investments and ask if the founder is happy to chat. If we didn’t we might get more information, but the marginal benefit of insight does not nearly outweigh the potential downside of our reputation.

Recently, a major VC contacted a company to have a meet. We know full well that they had unofficially committed to investing in a competitor. An email read “this is highly unethical, do not take the meeting.” Ironically the firm already has a ‘reputation’ and by that I mean not a great one, they are however still very successful. Maybe it works for them, but I don’t think it works for us.

I believe a good reputation does come at a cost, but that the benefits outweigh any potential short-term loss and the inevitable social awkwardness. The literature supports that it is near impossible to quantify the value of reputation, and neither do companies look to do so. I, however, will go with the qualitative evidence and stick to my naivety in believing in dictum meum pactum.