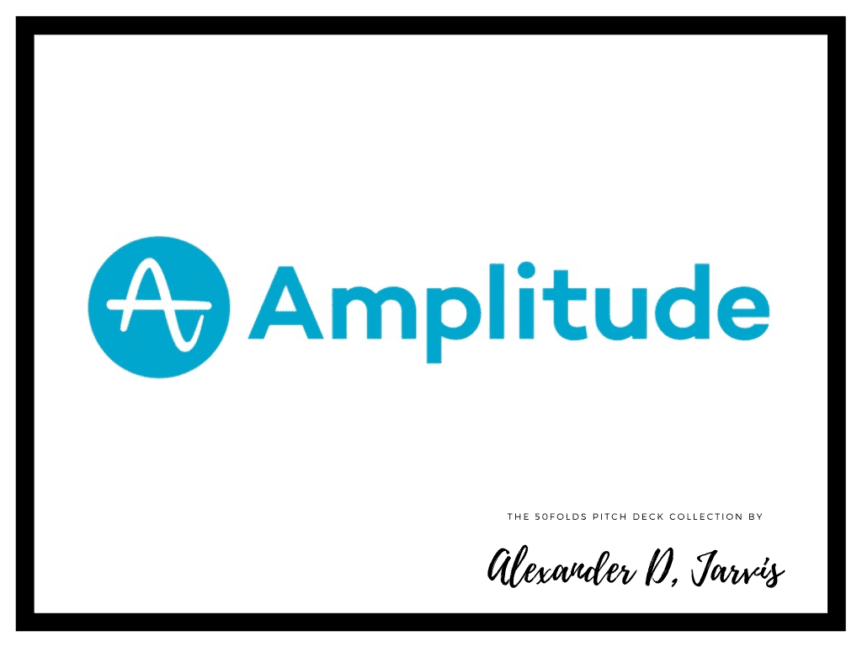 This is the Amplitude pitch deck to raise a $9m series-a round in 2015.

Amplitude is the product intelligence platform that helps companies use their customer data to build great product experiences for systematic business growth. Headquartered in San Francisco with offices in New York, London, Paris, Amsterdam, and Singapore, Amplitude is the cross-platform intelligence solution of choice for modern product and growth teams. Amplitude serves over 30,000 teams at companies like Microsoft, Twitter, Adidas, CapitalOne, NBC, Hubspot, and Procter & Gamble.

Analytics startup Amplitude announced in July that it has confidentially filed to go public in a direct listing, just one month after it had raised a $150 million Series F at a $4 billion valuation led by Sequoia Capital.

This week, Amplitude publicly released its S-1 paperwork ahead of that listing, showing growing revenues: It posted over $72 million in revenue for the first six months of 2021, up 57% from the same period of 2020. It also shows that while the company isn’t profitable, its losses are narrowing, posting a loss of $0.57 per share over that same period, down from $0.68 in the same period of 2020.

The direct listing means that Skates will be the youngest CEO to take a software company public since Box’s Aaron Levie in 2015 — with the document also showing that the 33-year old CEO has a compensation package of over $6 million.

The startup has experienced tremendous growth in the past year as companies increasingly want to use data to better engage their customers online. But the firm’s journey hasn’t always been smooth.

Earlier this year, Amplitude CEO and cofounder Spenser Skates told Insider that he initially struggled to get venture capitalists to understand what his startup was trying to do. While he believed the aim of his company was clear — to help businesses understand how customers are using their products — the VCs just couldn’t seem to get it.

He pitched over 70 firms for his seed round back in 2012 and was met with a lot of skepticism. He felt incredibly frustrated and remembers blowing off steam to a friend by saying he “hates” the investors. It took two years before Amplitude was able to raise a $2 million seed round from SV Angel, Quest Venture Partners, and Data Collective.

Skates eventually realized that his pitch was the problem: He was spending too much time trying to explain the company itself, and not enough time showing how the product would be good for users.

“I realized when I look back in the seed decks and in terms of pitching, I didn’t do a good job talking about customers and the pain they had,” Skates said. He revamped his deck, and managed to raise a $9 million Series A round led by Benchmark Capital in 2015, followed by a $15.9 million Series B led by Battery Ventures in 2017.

You can read Amplitude’s seed deck, as well as the Series A pitch deck that actually got VCs to open their wallets, below, to see how the company‘s messaging to investors changed over time.

But Skates really had a pitching epiphany when he met with Sequoia Capital’s Pat Grady, who, after the presentation, pitched the company back to Skates even better than he could explain it himself.

Grady honed in on how Amplitude’s tool helps companies understand their digital products — not just with how mobile apps are being used, but how digital services like apps or websites serve as a “distribution channel” that can drive attention to specific goods, services, or deals.

For example, one of Amplitude’s clients is Burger King and it helps the fast food chain measure what features on its app users use the most: which promotions are most attractive to customers, for example, or which menu items they linger over.

“When Grady made this big point about the product being its own distribution channel, I thought ‘whoa, this guy finally gets it,’ he is able to see the company‘s potential,” Skates said. 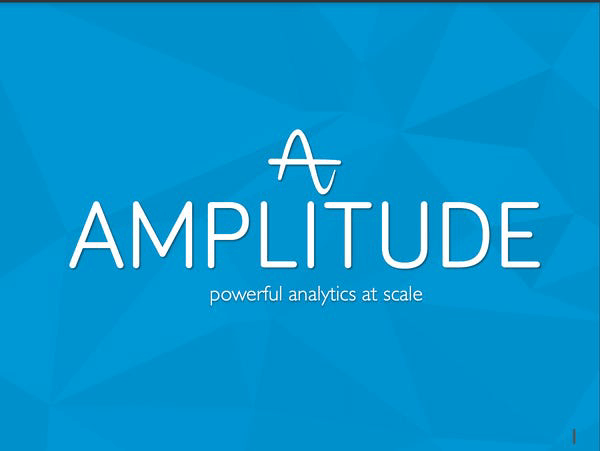 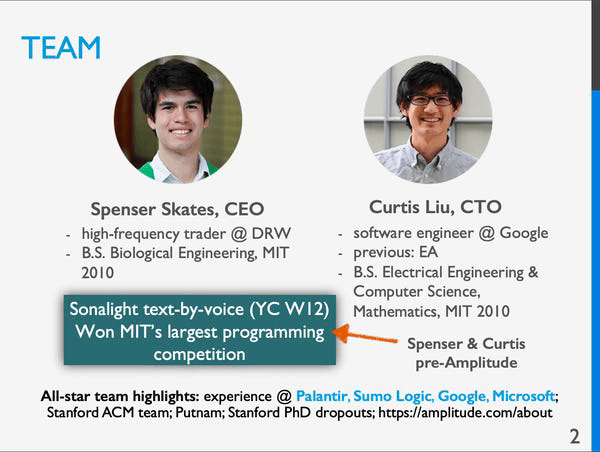 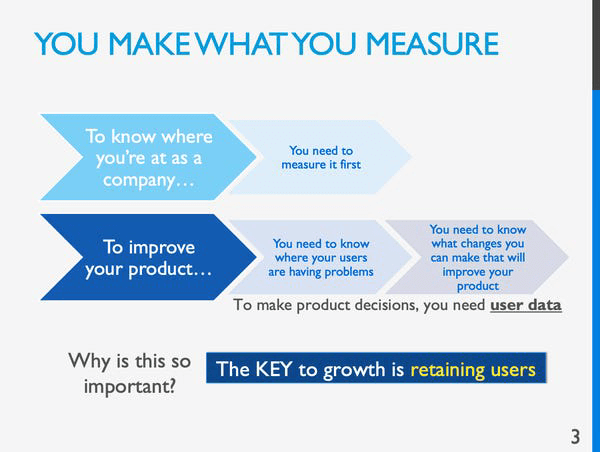 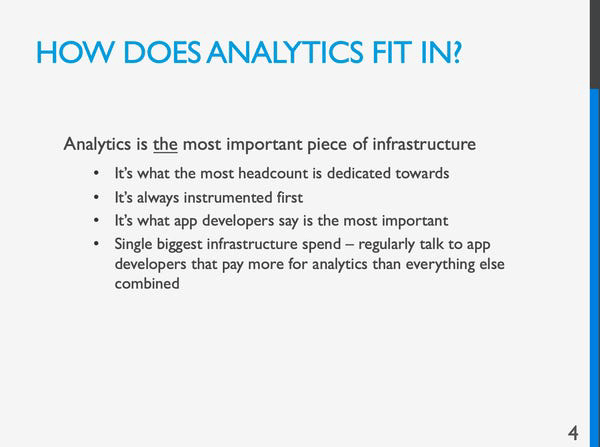 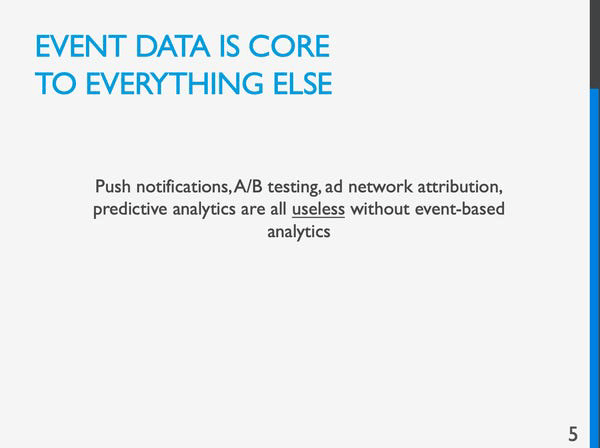 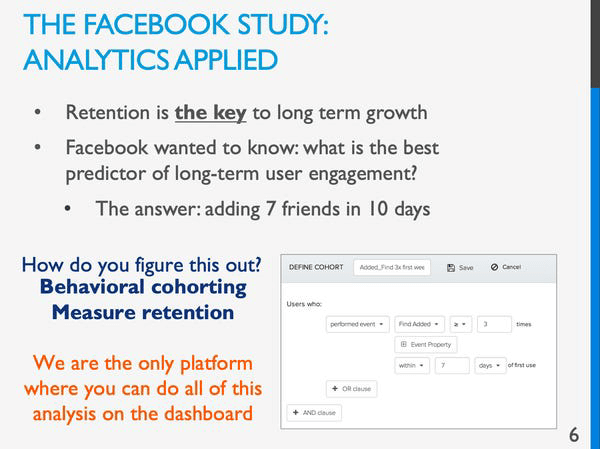 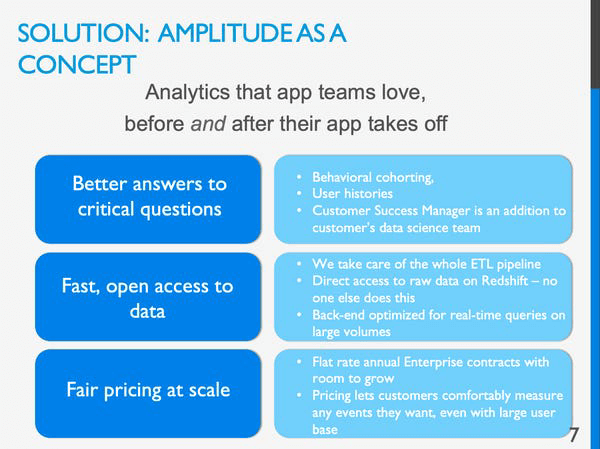 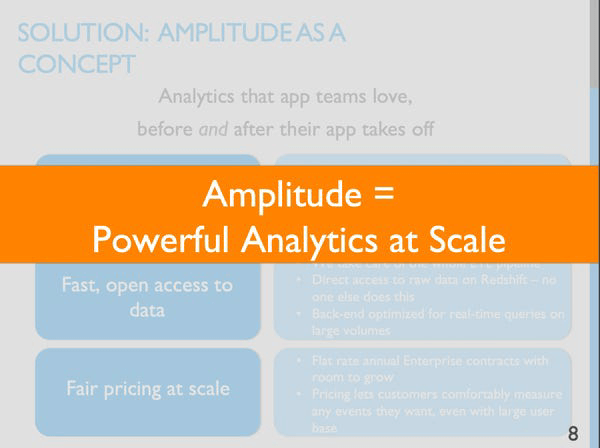 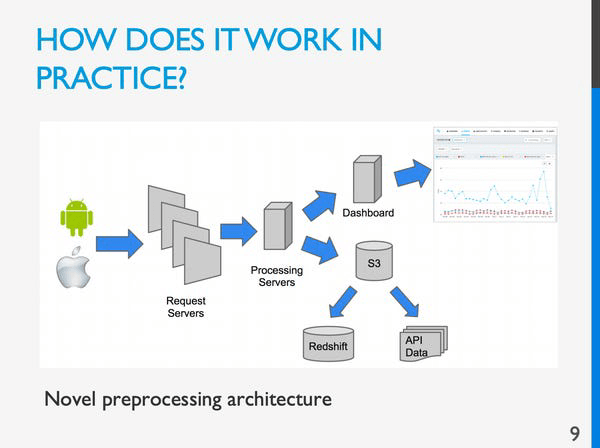 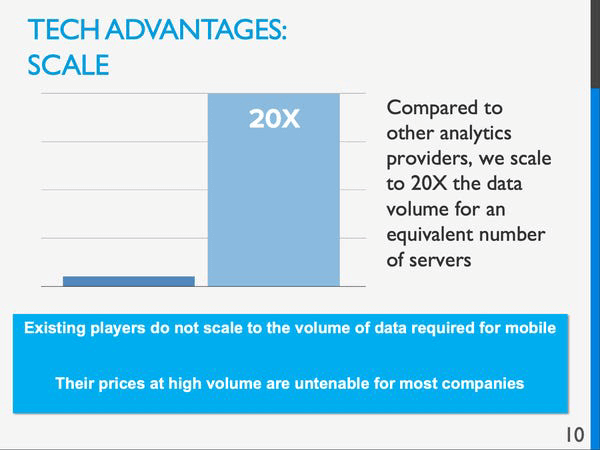 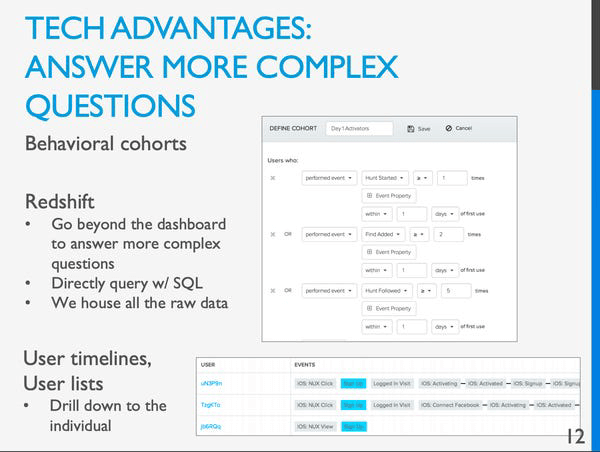 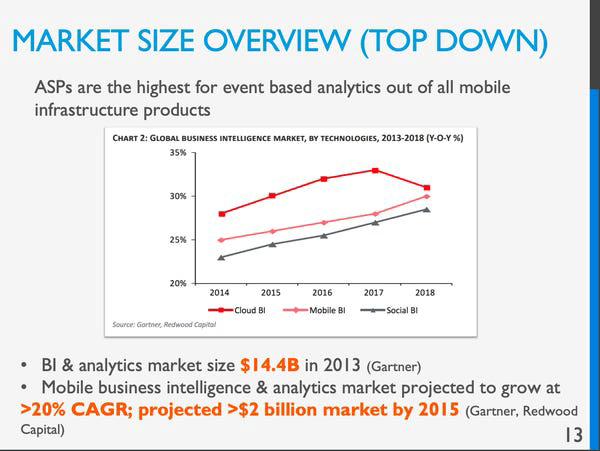 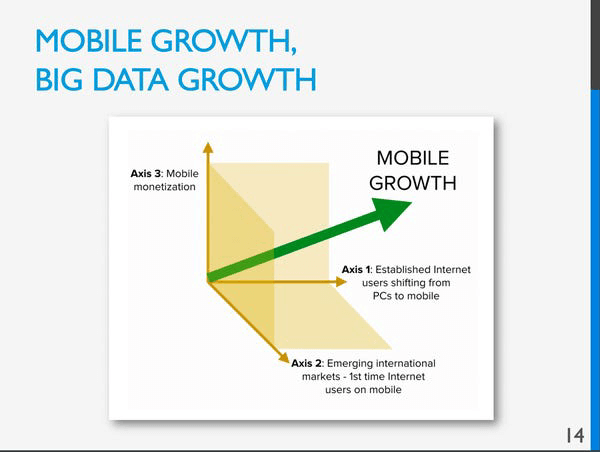 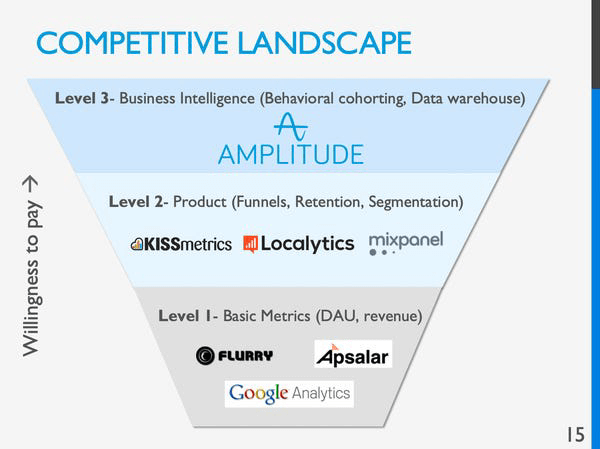 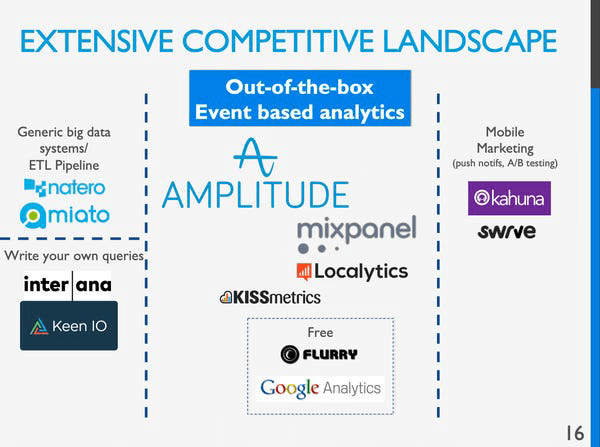 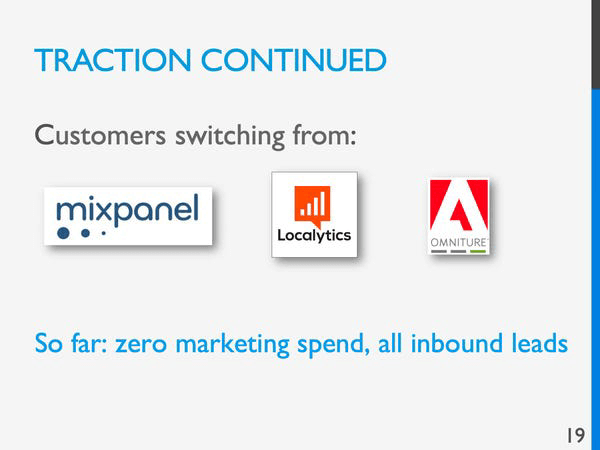 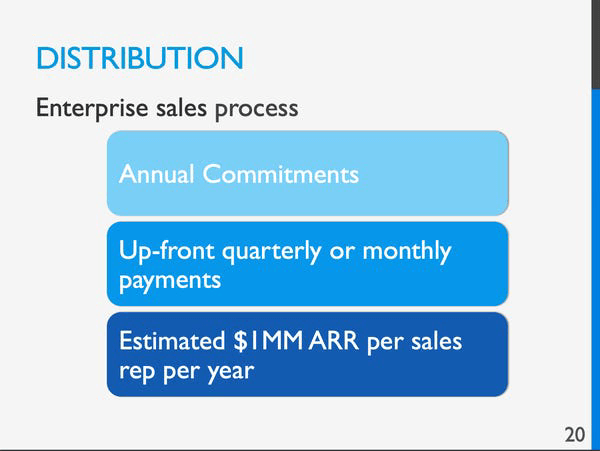 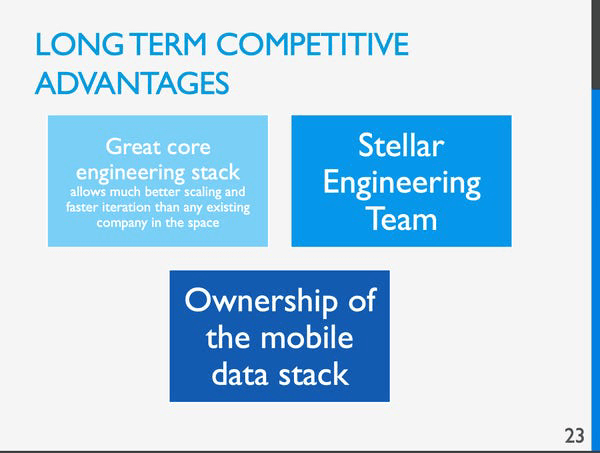