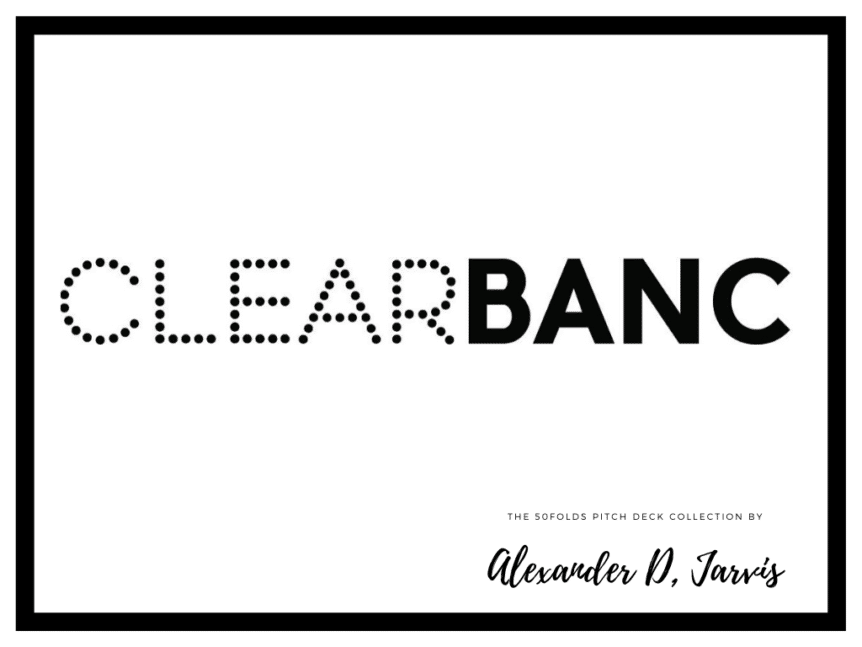 This is the Clearbanc Pitch Deck used to raise a total of $300M in their series-B.

Clearbanc invests in entrepreneurs to help them grow their web-enabled businesses.

Clearbanc is betting that venture capital is the next in line for disruption, and they just raised $300 million in venture funding to prove it.

The Canadian startup, which provides funding for other startups to spend on marketing and customer acquisition, announced Wednesday

a $300 million Series B financing round led by Highland Capital, Inovia, and Emergence Capital. The financing portion of the round was led by Arcadia Funds with participation from Upper90 Ventures.

Clearbanc pitches itself as an alternative to venture capital for startups spending heavily on things like Facebook and Google ads, and this is its second venture funding round in less than a year. According to Pitchbook data, the company closed a $70 million Series A in December.

Clearbanc claims to automate the pitching process using a machine learning model that can supply companies with anywhere from $10,000 to $10 million in funding instead of giving up a portion of the company to an investor just to turn around and spend the funds on ads. This model works particularly well for ecommerce startups that need to get in front of new customers to grow, according to Gary Vaynerchuk, CEO of VaynerMedia and Clearbanc investor.

So how was the Clearbanc team able to sell traditional venture investors on a model that is in direct competition with their own?


Clearbanc has done a very solid deck. It’s one of the best I have seen. They do some things I don’t like around the volume of content, structure, headers, but it’s great.

There is a lot to learn from the deck. I don’t say that often. Well, I almost never say that.

Most slides have too much content. You want to aim for something around 50-60 words per slide unless there is a reason. Whilst the content is high quality, it is a bit much. This is what happens when the founders are smart and put in a lot of time. You need a third party to be brutal (me) and call BS on every single word.

There are 19 slides, but there is a lot on the slides. I feel they could have turned a few slides into 2. It takes quite a while to get through it all.

The length of your deck doesn’t matter that much. How long it takes to read does.

The headers are garbage. What they do is force everything into the body of content. This means you have to be all in and read everything.

Unless investors are committed they won’t go there.

The deck was clearly done by a good designer. The appendix slides are over designed, but everything else is great. There are learnings.

All the slides other than possibly one are in the correct order. There sort of is a narrative, but you have to read the deck to follow it.

There are no page numbers.

Sources shouldn’t be so close to the floor of the slide.

Use a consistent format as it is easier to read.

This isn’t really a startup deck. Well it is, but really they are a new kind of VC. You can still read this deck as a founder and learn as one would from a fintech deck.

They cover pretty much everything that I would want to know. Go to market isn’t clear, but it seems to be “we are famous”. What I would say is, if the founders weren’t famous they are missing slides, or they weren’t done well, Credibility enables them to sort of gloss over some points. 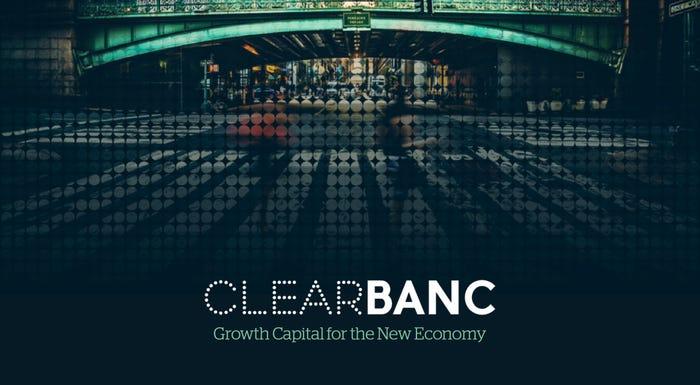 I’m writing this steam of consiousness. I can immediately tell that the slides are not going to be consistent and go all over the place. A quick look and I’m right.

Pitch decks should start with what you do so everything has a foundation for understanding.

I would probably start by explaining why a new funding source is needed.

The way the deck is structured, you need to read everything to understand it. My guess is the content is solid, but it’s a commitment.

The founders are known so the people they reach out to will take them seriously. They can get away with writing this much. You can’t.

The font on the bottom is small. Words need to be tightened up. I assume they’ve decided these are effective footnotes.

This slide should be two. Start with the dynamic and the next are the two examples. 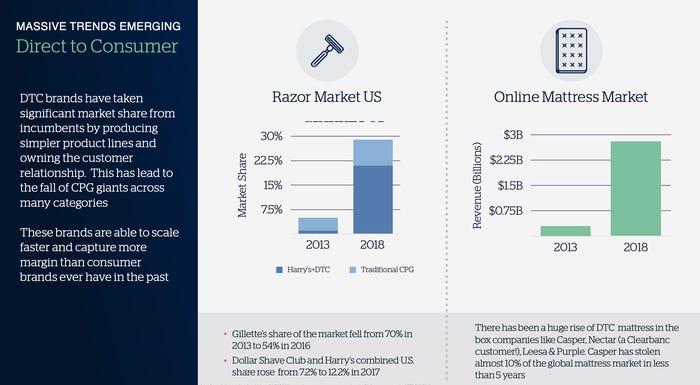 Their slide category “massive trends emerging” isn’t needed. They add more text to the slides. The headers should be obvious per se.

The images on the right are ok, but graphs proving this are better. You can’t always prove what you want to say, but try to.

There’s quite a lot of bullet points (without the bullets). They are all fair points, but there are a lot of them. Direct listings for example is a trend, but how does that pertain to them? 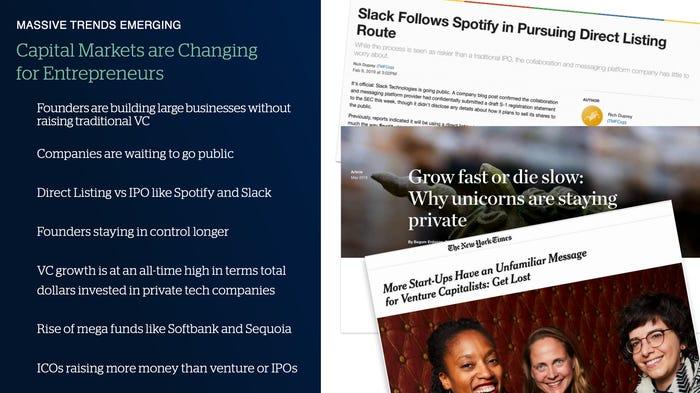 This is a great point and lends to why Clearbanc exists. The structure of it is solid.

I don’t like having takeaways on the bottom of the slide. I know hedge funds etc do them, I just don’t like them. They make designing slides a bit harder.

The quality of the content is very high. I wouldn’t have done better. 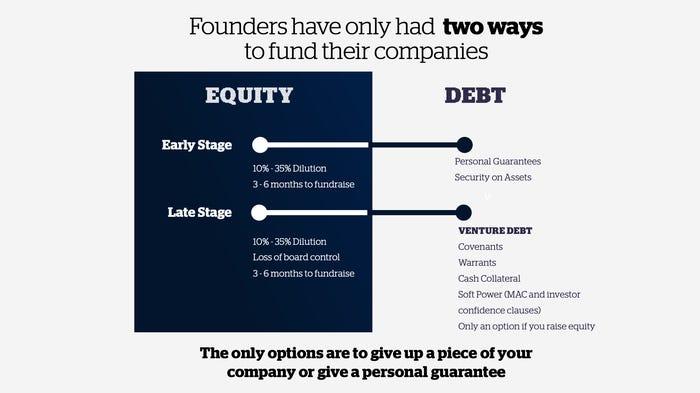 Where is the header?

I have read this stat a few times and I love it. This is about the only time I’m ever going to say it’s ok to add a quote on a slide.

I would probably add something about the cost of capital on the right, and there would be the usual header on the top.

There is a source (I think) in the bottom right. It’s dangerously close to the floor. 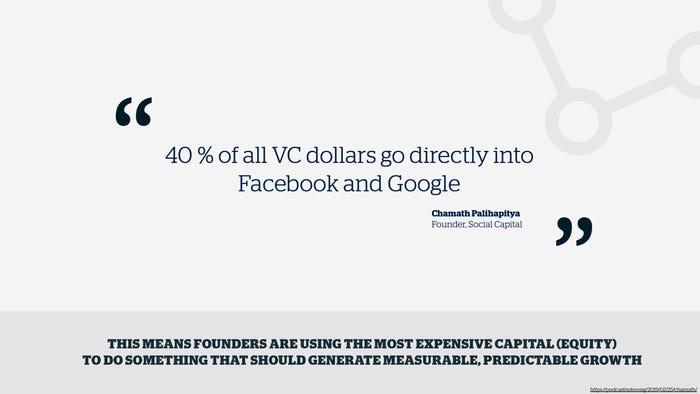 Clearbanc in the top left is not needed.

It appears this is a product slide but it’s also about revenue. I would split them up.

The content is good, but split it up as I said. I have some questions about their revenue model, but those are the kinds of things investors can ask about. 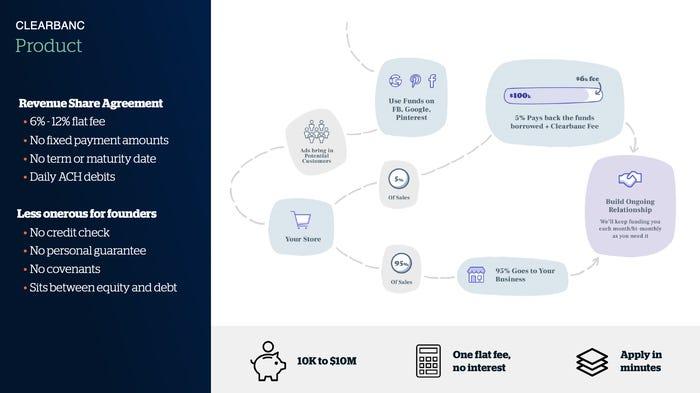 Minor, but write “we” instead of “Clearbanc”, it takes up a little space. Space is a premium on a slide.

I don’t like positive adjectives. “LOVED it” makes my skin crawl.

I don’t really understand the header.

What’s the $1b bit? A forecast? In banking you would add “E” or “F” so I know they are estimate/forecast. Estimate is for this year and forecast for future new years. 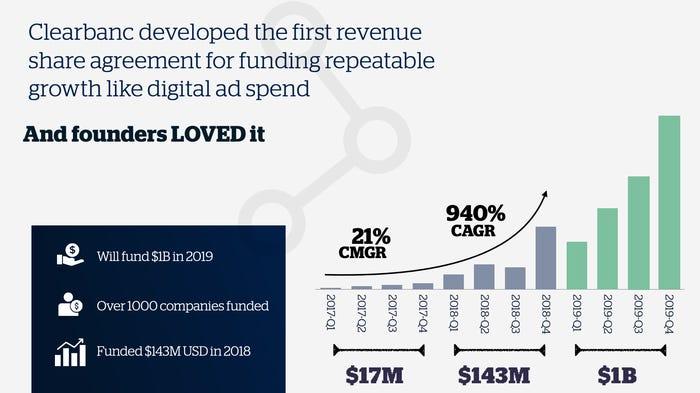 I think this slide should have been earlier, maybe with the “founders have two sources”. I’m not sure. I would have to think about it. The deck is really solid so I’m nitpicking and I’m writing 15 of these blogs a night atm!

The table is great. It’s not super transferable for all startups, but there is something to be learned from here. 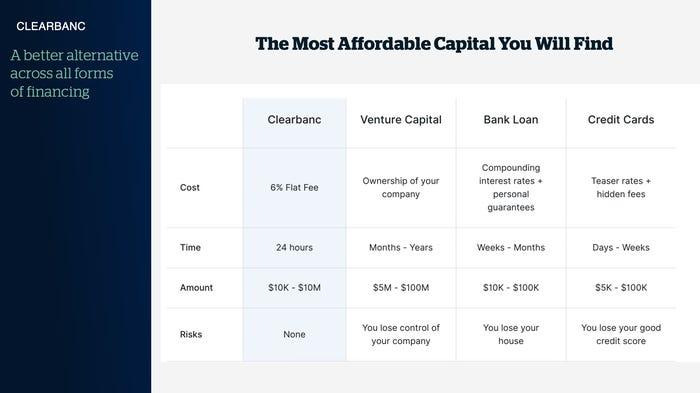 This slide really speaks to what the startup is doing and is effectively a “mission” slide without all the weepy BS about saving the children.

I find the graph a little hard to grok. There is no axis. This could definitely be improved.

The text on the left is a little verbose. It should be tightened up.

The shole slide has great content, but it’s a bit busy. Would take some hard calls, but it needs to be cut down a bit, or spread to another slide. 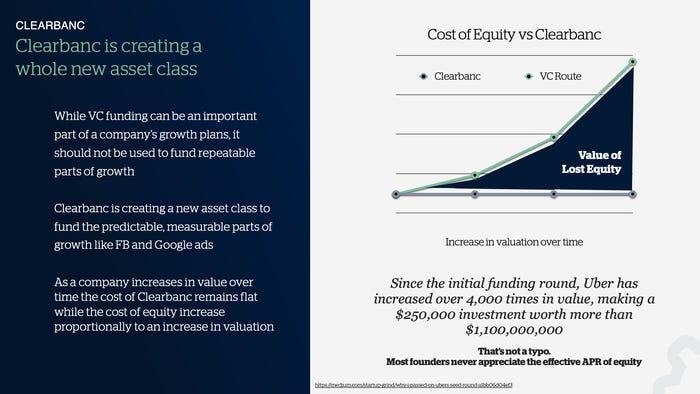 The image on the right is horrible. The sources are crammed down on the floor. I don’t know how they arrive at the numbers which is the core thing I want to see in a market sizing slide. Immediately when I see a T in market size I call BS and assume BS.

So this is where they are starting? The next slide should be an expansion slide to explain the other segments they want to attack and how much they add to their market size. 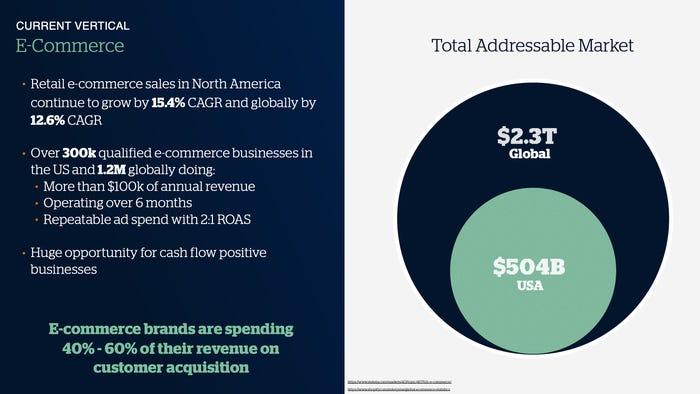 Ok solid slide, but it isn’t super informative. I would pick three and add specifics. How much did they fund them, what were the terms and economics? 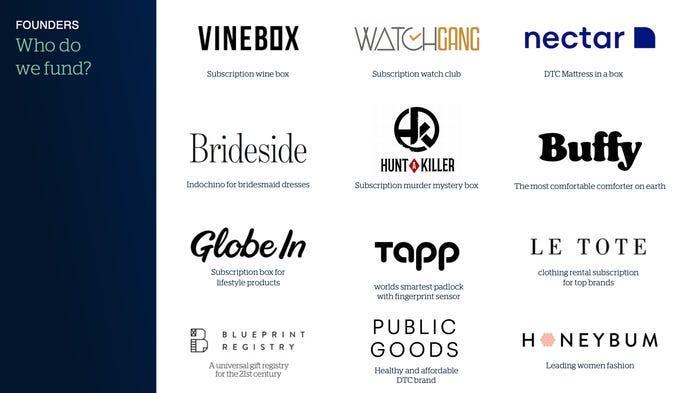 The structure of the slide is weird, it’s like the heart is what matters when the points are the point. I would like to see a metric for each of the points. 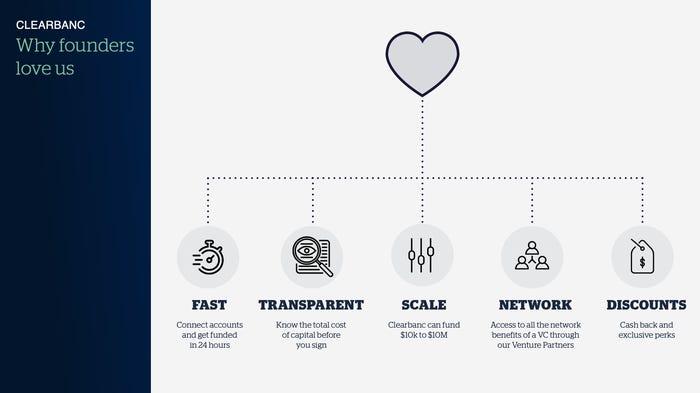 This stuff is only stuck in as they believe it will get them money. I hate this stuff because it perpetuates the narrative women are less capable and it’s bullshite. 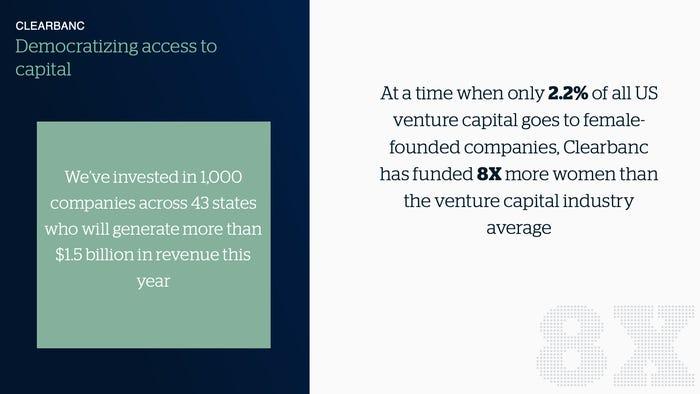 It’s a traction slide and a flywheel which isn’t explained. The general point is there, although not explicitly proven. 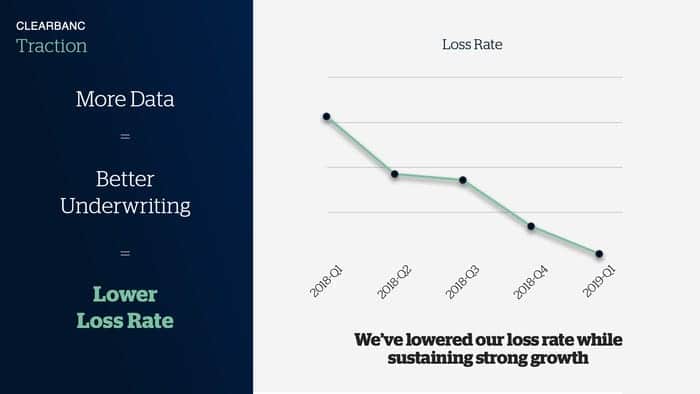 We know famous startup founders? What’s the point? Is this a go to market strategy to secure deals? 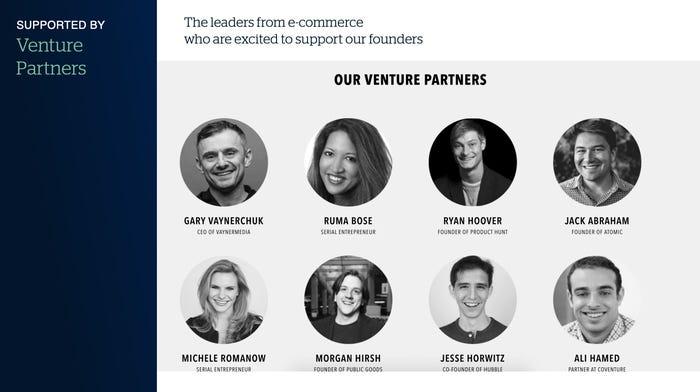 Jesus motha fecking christ out lord. What the heck is this. It’s the worst team slide I have ever seen.

Sure they have something to talk about, but divide it by 8.

Do you have to call yourself a media personality? That’s ego.

When you have done stuff, no one gives two shites that you have gone to uni! 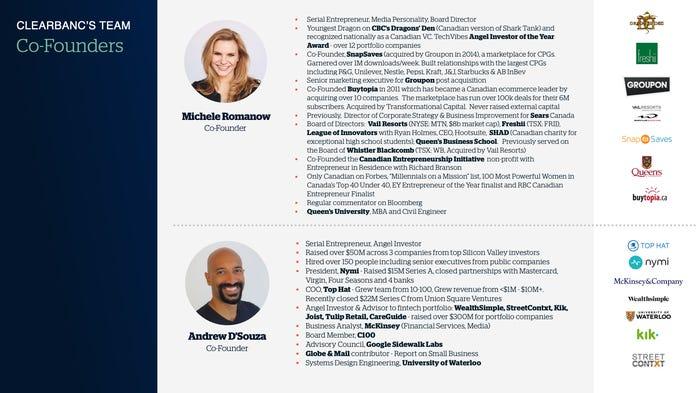 Ergh, don’t put an appendix in a deck. Save that for when investors are interested. If you don’t think they should be in the core deck, they shouldn’t be there. 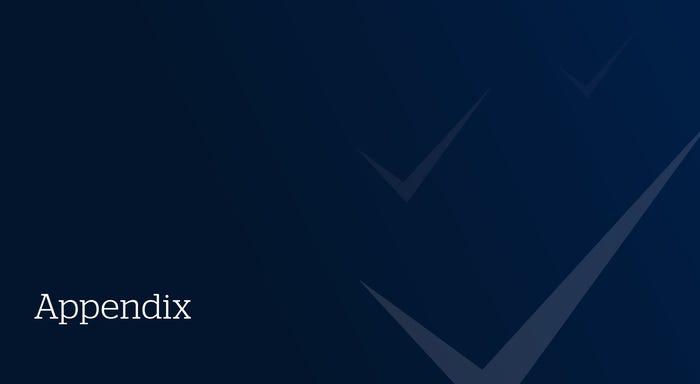 Ok, there are only two slides in the appendix. I’m guessing there were more slides but they were redacted.

This slide is form over function. That huge ass purple box of text is a lot. It might be manageable if the image the quote was blown away. 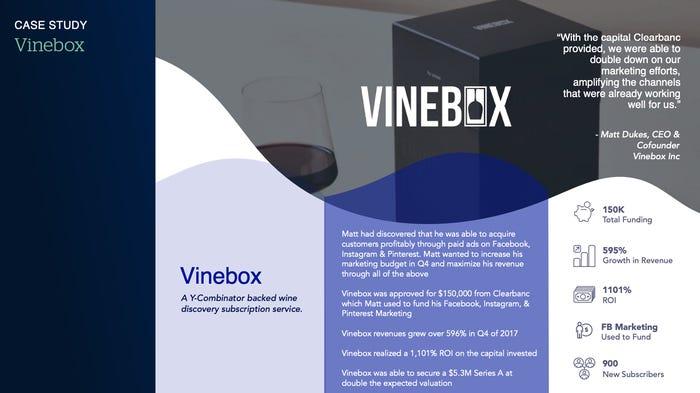 Again, kill the image and there is more space for text if you need it. 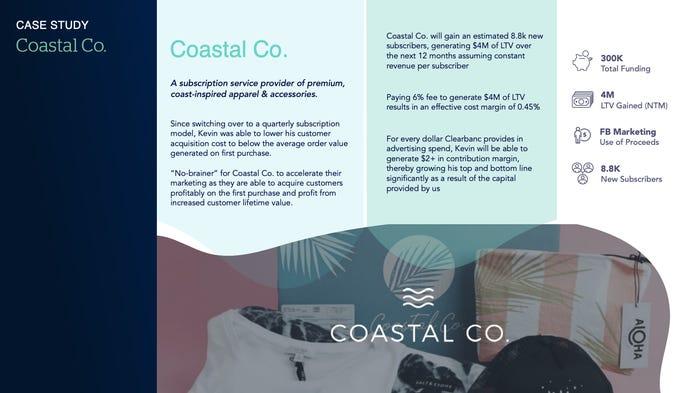