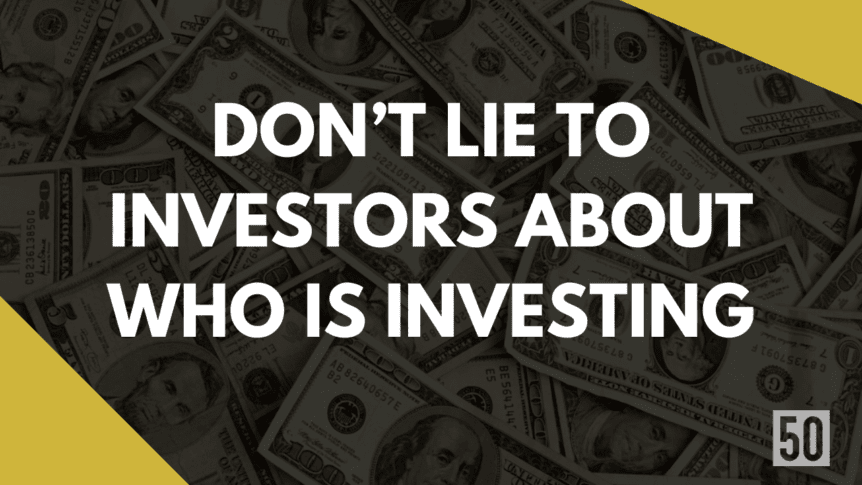 Tl;dr: Founders will feel the pressure to say things to investors in order to get a deal done. Whilst some claims are OK, others could kill the deal. Lying about who is investing and your metrics are sure-fire ways to get caught. Don’t flat out lie, especially if you can be caught. Don’t lie to investors.

I know you need that round closed.

I know you’ve read that confidence and social proof matters, but be careful.

When you look at a picture of a burger in an advert for MacDonalds, you know that it is not what it looks like in the real real. Despite this fact when you’re ossified at 2 am after a big night out and hungry as hell you don’t care. You know what you’re getting (broadly).

I get annoyed by pretty much everything and misleading advertising is something I question why it is allowed. I’m mean like, McDonald’s, that’s not a real Big Mac, mother feckers!!!

But ‘puffery’ is allowed.

So what is ad puffery?

Advertising puffery is defined as advertising or promotional material that makes broad exaggerated or boastful statements about a product or service that are subjective (or a matter of opinion), rather than objective (something that is measurable), and that which no reasonable person would presume to be literally true.

Most founders are on a spectrum of being delusional. I mean you have to be nuts to start a company.

You’ll lie to yourself that sales prospects want your half-baked product and tell everyone “everything is awesome!” You need to.

In the case of Atari, you might tell hires you have a contract with IBM to close the hire… but they can’t really check… I watched that in a documentary last night.

Ok, that’s shady, but the point is it’s hard to get caught out.

You might have to do things with the ethical lens of Saul Goodman to hustle your startup forward… but be really careful with investors.

Only ever say things which are subjective, and never something objective they can check, or they’ll eventually find out.

It’s not worth the risk.

I just wrote a blog and remembered a time I caught a founder flat out objectively lying to me. So let me tell you that story in brief.

Example of founders being caught lying to an investor

I heard on the grapevine a fintech startup was just about to close a deal. It was hot and it was all but done.

Investor FOMO kicked in and I decided I might want that deal for myself.

I got on the phone with the founders and liked it. I liked them. I didn’t understand it all, so I checked with friends. They concurred there was something here.

I mobilized the other founders and our fund friends with clout in the space to give them calls and compel them to take our money instead.

And do you know what… we pulled it off.

The deal was mine to take.

Only, it didn’t happen. Why?

I caught them in a huge lie.

Short version, I called them late at night outside a bar to follow up and asked them “Who else is investing?”

They openly told me two fairly well-known investors were in.

Turned out I was dating one partner and the other was a close friend of mine.

Within 10 minutes of getting off the phone with the startup, I had talked to both of the partners.

The conversation in short was:

The founders had flat out lied to me.

I really liked them (and we’re still friendly) but they lied to me.

When you invest in a startup, it’s for years. You need to go through a tonne of ups and downs and need trust as a base.

I had to pass on the deal simply because the trust was lost.

Fast forward a number of years and the guys have done really well! I mean headline news well.

So yes, I missed the deal, but I don’t regret it on the basis of what happened.

Sell your heart out!

Be energetic, passionate, and enthusiastic as a puppy!

Try getting away with showing quarterly instead of monthly revenue numbers if it smooths numbers out (doesn’t really work btw).

Tell investors customers love what you do and your positioning is far smarter than what anyone else has.

Feel free to puff things in the best light like McDonald’s, but don’t lie to investors.

You will always be asked, “who else is investing?”

Every investor is going to ask “who else is investing?” if they are in any way interested.

It seems like a throwaway question, but investors really want to know the answer!

You will feel the need to name names but do not.

Apply puffery liberally, but do not lie about soft and hard commits. Say things that can’t be checked or come back to haunt you.

If you say you have a tonne of investors about to give you a term sheet, you’ll follow up with the investor a week later and have to say there’s no progress… and the week after. It will get fishy fast.

You need a relationship of trust

You need to live with investors. You’re going to report quarterly/monthly till you shut down or sell.

At some point, your lie will come out and your trust will be lost. In the worst case, there are reps and warranties in your docs which investors can use as a ‘way out’ and get their money back.

It takes a lifetime to build a brand and a moment to lose it.

Investors all know each other

You may think you know investors if you have been pitching and been around a while, but you don’t talk to investors for a living.

Around 2015 I literally knew every single venture investor in South East Asia and had beers with most. For anyone I don’t know, there’s pretty much no one I can’t get access to.

The VC world is crazy small and they all talk.

If you talk to a prospective investor, you can be sure whatever you say can be verified within an hour.

Don’t say things that can be checked or are important

If you’re saying something important enough to lie about, you can be sure it’s something that matters to investors. They will focus on them.

There’s a host of things you should not obfuscate or lie to investors. For example:

Never ever say investor names, regardless of soft or hard interest.

OK, if you are looking for a lead and you have 5 angel investors that love you and are soft in for sure, that’s fine and can be very positive. Share those names, but the angels aren’t competing with a VC to lead.

There is no upside for you.

If you mention some tier-1 firm, here are some potential consequences:

Trust me. It’s never a good idea to name names. Snitches get stitches.

What you say is “We’re progressing with some great firms who know SaaS. They’re of great caliber – just like you. 3 are about a week ahead of you in the process and 2 at the same stage. We have $300k of soft commitments from some experienced angels that we’d love to have onboard given their network and industry knowledge if there is room in the deal. You probably know them. We’re focused on securing a lead. We would love to have you given your value add, but we think it will be a competitive deal.”

Don’t lie to investors. Don’t name names. It won’t help you. Spill some silky bull shite like the above when you’re inevitably asked: “who else is investing?”

Any questions? Ask in the comments and let’s debate.