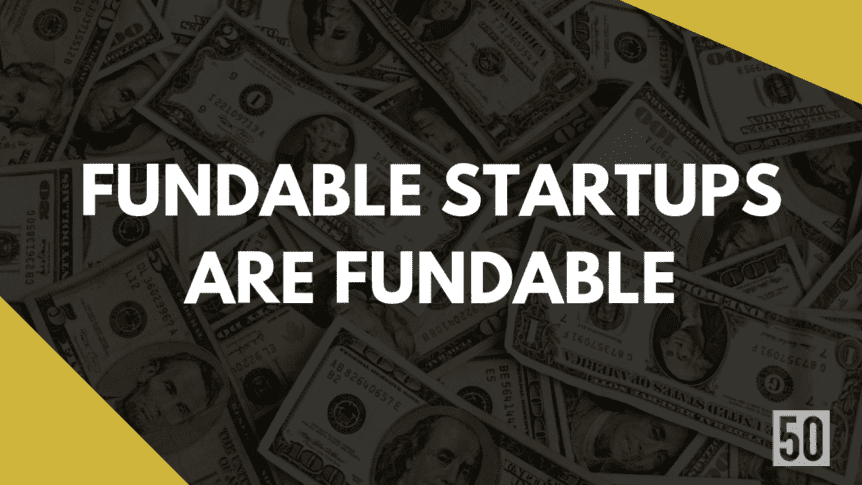 Tl;dr: If you want to raise money you can save time by simply being fundable. You have either built a business that is fundable or you have not. Your business model may not be fundable in the first place but can still make you rich as a lifestyle business or more (Mailchimp and Atlassian didn’t raise VC). VCs only fund certain kinds of businesses. That’s good and bad depending on your goals. If you are not a fundable business, save yourself time (and your reputation) by not starting a painful fundraising process at all, or until you are ready.

What is startup? What does it mean to you?

Or rather, why did you start your company? What is the objective?

It comes down to two things, which are weighed together depending on your personal drivers, compass, and circumstances. These are:

On the one hand, you may be driven to change the world, and the other, you want to get rich, be lauded by the media and be attractive to your desired sex. Both are fine and whatever mix you decide.

Only, there is a niggle in the mission and the mercenary.

If you do not succeed:

Face this sober reality. Your default is a failure. If you somehow succeed, there is a reason why your name is famed; you are the exception.

Startups never technically fail. They simply run out of funds and the founders and team lack the resources to commit to the path to make the business work.

Alternatively, you kill your startup as your business model does not work (Read this to understand why business models and strategy are key). It’s just nice to have the option to make that call.

If you go down the venture capital path, you are committing to a particular kind of rocket ship. If you have the right business model and the right strategy, and you are often addicted to VC fund crack to stay alive.

Look at SaaS. You spend money and there is a time before you recoup the money that you spent to acquire customers. If you go all rocket man, then there is a deep trough for a period of time where you are investing to generate ever more MRR. If you decide to stop growing as fast, you decrease marketing spend and can also decrease your level of losses from that marketing spend. You stop acquiring customers which will prevent you from yielding more revenue, but in the short term you are bleeding out less and previous customers (if churn is low) will push you to profitability.

Only the catch is that VCs and the public markets value growth over profitability and pretty much anything else.

There are some magical business models and teams that build businesses which are profitable from day one (or very close to it) but they are the exception. For everyone else, they raised money to grow faster, and they are now addicted and dependant on that VC fund crack to keep the business afloat. Whilst there is tremendous opportunity in the long term, at least in the medium term, breaking the habit by not being able to raise money will send you into a withdrawal which kills your business. Most will not have the ability to adjust their business in time to be able to recover.

As a founder looking to build an independent, drug-free business in the long term, there need to be a plan to have a quick rehab and get clean if the need arises. For some, they go to rehab but keep stealing drugs to delay the inevitable. That’s an IPO. Think Uber. Still losing money but they have tapped out the private market for dealers, and are taking money from institutionalized sellers in the public markets now for as long as they can, in the hope they organically get clean and live on their profits.

The crack addiction is funny though, as you aren’t really paying the dealer for it now. Like a con man (con comes from confidence if you weren’t aware), you are offering IOUs in the hope you pay them back in future with a heavy vig. The dealers give you the crack on the basis of your sales ability, metrics, and pretty powerpoint presentations.

If you can’t get your dealer to keep supplying, you are in trouble and they will break your knees (cap table).

What is the definition of success?

If you are broke, $1m is a life-changing amount of money to you. Well, these days it’s something 😉 It can at least fund your next startup so you don’t get pounded on dilution on the early stages.

What about $20m? Well, you can buy a house or two with that. Kids are in a private school. You don’t need to worry too much anymore.

You’ll find no matter how much money you make, you still want to make more. That’s how you got any level of success.

Define what success is to you now. But know the goalposts are going to keep changing no matter how much more success you have.

I have you dreaming about success now don’t I? It seems almost like an inevitability, right?

So come back to reality.

A key thing I need to instil in your head is that you need to do the right startup to achieve your personal definition of success (or exceed it).

You can easily do the wrong thing and achieve nothing.

You can, with great difficulty, do the wrong thing and achieve varying scales of success.

Or, you can do the right thing, and with great difficulty, be the person everyone wants to get an intro to, and funding from.

Choose your own adventure.

Life will choose it for you regardless. I would prefer to be the prom queen.

You are or you are not fundable

I talk to founders who are raising a lot. So, I say this to founders so regularly, I felt I needed to write a blog about it.

You are fundable, or you are not fundable.

I said it again.

That’s an easy thing to say, but incredibly hard to explain.

You want money. Investors- give it to me!

But investors don’t hand out money. You read TechCrunch (before the paywall) and think it is easy. It is not. It really isn’t.

You read random ass companies like Wag raise $100m and think what the holy feck. And you would be right.

No VC started their fund to fund dog walking companies. They have some VC thesis about funding the most innovative companies that will change the world, in the same way, you make up bullshite and include blockchain and AI buzzwords to try jack up your valuation.

But do you know what? If a company has the metrics, they get funded.

They are fundable. This is the point I am making.

The moment they think you are not the fund maker, you will quickly find that they are unavailable, late for board meetings (and unprepared) and less inclined to be offering all the value add they originally promised.

All these top VCs tell you shite to get you to take a lower valuation are offering services to justify that valuation. The value add is just so you make their business model work.

They only love you when you are lovable.

You are only fundable when you are fundable.

VC funded businesses ARE NOT the only path for a startup. I think it is a terrible path for most. Funding has turned into this badge of honour and that’s lame. Build a bootstrap business that you own. IF it turns into a rocket ship, then consider funding, but also don’t. I’m on a mission to reeducate people on the merits on bootstrapping, so this is a quick aside.

If you are a fundable startup, then you have done many of the right things.

You are not fundable

This is where this blog is really targeted. You are basically Rudy. You’re playing football, but just not at the same level as everyone else. You may have a lot of heart, but you just get one lame ass call to the field at the end of the movie whilst everyone gets on with staying in the limelight.

These days, with some sales hustle you can con some idiot angels into giving you $250-500k. It gives you a false sense that maybe you are more than Rudy, but you are still Rudy in a business model and growth potential sense. You aren’t going to get to series-A. As a now VC crack-addicted startup, all you have done is conned yourself into thinking you have a shot at the big leagues in the NFL, when your glory moment is the same as Rudy; a $500k seed and brief mention in TechCrunch. A year or so you are not fundable, don’t raise and you’re off looking for a job and probably in debt.

I’m writing this and I know I am being harsh. Most of you will probably think “whatever Alexander, I’m not fecking Rudy, I’m the next Payton Manning!” but what entrepreneur doesn’t? I’m saying this to put the shits in you so you think critically about how you are spending your time and to critically evaluate if you should really be going down the VC path, or if you are insistent on unicorn hunting, that you are building a business model that is potentially capable in its fundamentals.

If you aren’t, you are only fooling the man in the mirror, and the only thing you are going to disrupt is your bank account.

TechCrunch et co have brainwashed founders into thinking that the VC funding path is the only one, and the one where glory exists. This is a lie. Funding does not work for most startups.

If you decide to go down the funding path, then you should only undertake this world of pain if you are actually fundable in the first place. If you are not a fundable company, then not only are you going to blow 6 months as a masochist being constantly being told now, but you are going to structure your business model in a manner that is not self-dependent. If you become a company addicted to crack funding, and you don’t get any crack then one thing is going to happen. You are going to shut down. Also known as fail. It would have been better to have stayed in your job where you actually get paid a salary.

Fundable companies are fundable. Are you?