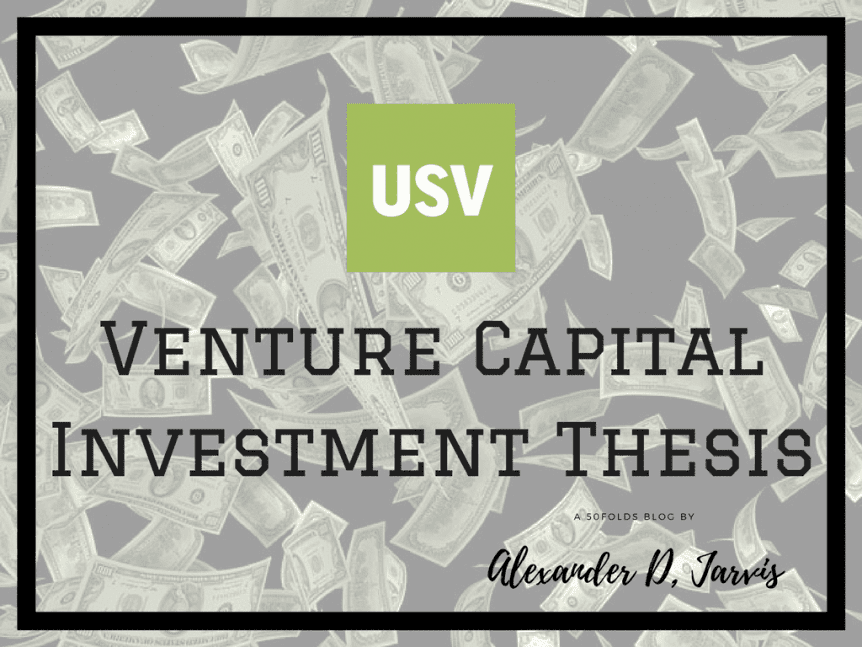 Investment thesis’ are a great way to learn about a VC firm, but more so it is a super way to impact on your thinking about the world and the lens though which others view it. This investment thesis deals with networks/network effects so there are some generally good thoughts about the key drivers of them.

Venture firms operate a bunch of different ways. Some have a geographical focus, others have a sector focus, still others have a stage focus. Union Square Ventures’ focus has evolved into what we call a “thesis” but is probably better described as a macro level view about the world – the Internet world – that we then (attempt) to structure investment activities around. In short, as described by Brad last year in 140 characters, USV invests in:

When we are organizing our activities and thinking about investment decisions then, we parse that a little finer, we unpack some of the components. “Large” obviously requires scale – Twitter is a great example. But it can also mean large relative to a specific problem set or community. Stack Exchange is comprised of over 80 question and answer sites. Some of those sites, like Server Fault, are designed for very specific communities, but aim to have most of the potential members of that community as active participants. Similarly, Behance is designed for the world’s creative professionals.

“Networks” are of course interconnected groups or systems, but they also come in a few flavors. For example, networks can be centered around person-to-person sharing of an activity (foursquare, Soundcloud), facilitating a transaction (Dwolla), enabling creativity (Tumblr, Wattpad), person-to-person marketplaces (Etsy,Kickstarter), or business and personal finance marketplaces (Lending Club,Funding Circle). Marketplaces have some of the more interesting network components and use the efficient exchange of information to produce superior economics and create new economies in their area of focus. Examples include the creative projects that wouldn’t otherwise come to fruition if the Kickstarter marketplace was not active, the individuals finding work through Workmarket’s labor resource market, or the active secondary market in small business loans (and pieces thereof) being traded through Funding Circle. Finally, networks can also be networks of data, such as what DuckDuckGo (search), Indeed (jobs) and Flurry (mobile apps) are doing that then provide aggregate data-level benefits to users from that data network aggregation.

We will also look closely at the “user experience” of these networks, being most interested in novel (“differentiated”) web and mobile native interface ways to engage users around a solution to the particular problem, one that is consistent with the fabric of the users’ experiences. The foursquare check-in is a good illustration of a native behavior designed in the context of exploring a city, as is Codecademy’s method of teaching people to program by writing code inside a browser window. Similarly, Canvas provides a unique set of tools to play with images, thereby encouraging the remix and sharing of them, turntable’s entire experience is designed to play music with other people, and tumblr’s dashboard is a method of following and reacting to and with creativity. Unique user experience also extends beyond the user interface – it’s the design of the entire system: how it functions, what is allowed; what isn’t allowed; what values are inherent in the prospective functioning of the service. Kickstarter’s incentive/pledge system, with minimum goals and rewards, is an example of a unique experience that is well-aligned with the goals of the service itself (participating in creativity). As Albert recently wrote about Etsy: “the best long term steward of a network will be a company that focuses on value creation for all participants in the network instead of solely for its shareholders.”

The last component of this thesis relates to businesses that create barriers to entry through “network effects“, in which the value of a service to a user increases as others use it. This can potentially arise in a number of ways: for example a proprietary data asset; the marketplace dynamics of having a robust set of sellers and buyers; or through the development of a community that openly shares and exchanges information. In an era where the initial cost to develop the prototype of a product has been dramatically reduced, where there are mature and scalable open source tools and services to utilize for that development, and where cloud infrastructure is available on demand and at a variable cost, defensibility may no longer be found in the technology underpinnings – the code or IP – of a service. Defensibility may however arise through the growth of service that gets more valuable, and more interesting, with each new participant. One nice example of this is Twitter, which is so potentially valuable because, put simply, that’s where the Tweets as well as the personal follower/following relationships reside. The value of these businesses tends to be composed of the very networks they have created.

Taken together, these components comprise how USV looks at the Internet at large to find places where we should invest and where we can be good partners. Of course, the components are not monolithic and are subject to nuance and interpretation (see for example “Do Network Effects Span Geographies“; “How Strong Are Network Effects Online, REALLY“), but again, of course, that’s what makes them most interesting.