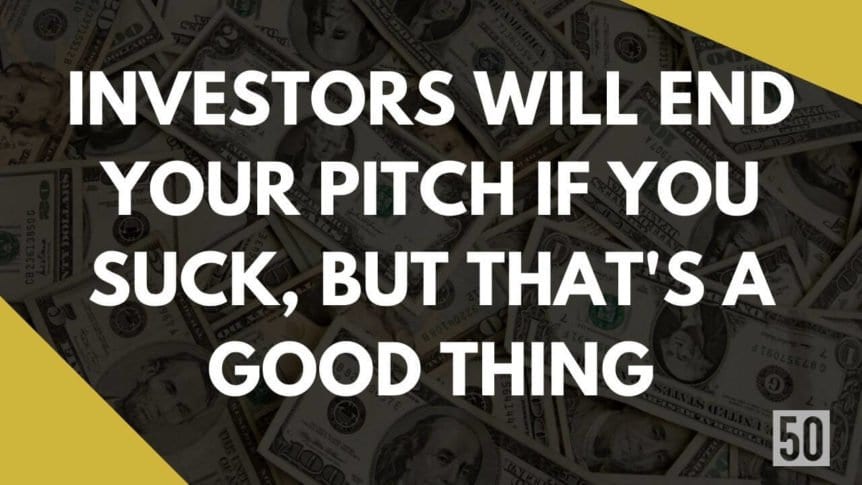 Tl;dr: If you get cut off, or your meeting with an investor ends abruptly, that’s not a bad thing. The fact the investor is being honest is a learning opportunity to do better.

You are a founder pitching an investor. Assume that you suck. Would you prefer to be told it was “great to meet you, do you have a long drive back?” or that “we should end the meeting now. This just doesn’t seem fundable to me“?

How does not being honest help founders when they’re validating their idea, trying to raise investment, or even figuring out a new go to market strategy?

So yeah, when founders say stupid things I call them on it, if they do a great job I’ll say so too. I find it’s whiny little wannabes that take offense to things. Founders who are going to succeed love feedback as they learn and get insights to improve.

Most investors don’t share my sentiments. In fact, they don’t actually share much at all, and they aren’t transparent. There is a reason for that though. They want to keep the option of investing in you in future if you somehow make things work… and they think they won’t have a shot if they were mean, I mean honest with you.

I obviously disagree. I’ve had founders email me later and say:

“I thought I should reach out to you since you guys gave me a genuine reason for a “no” in the past and not some random bullshit.”

Actually, read this, it’s a really good example of a structured update email and has that line in it. I know I’m taking you on a tangent! I just changed some details so I could share it. I pulled it from a deck I wrote ages ago on how to raise funding and I don’t have the original email anymore. 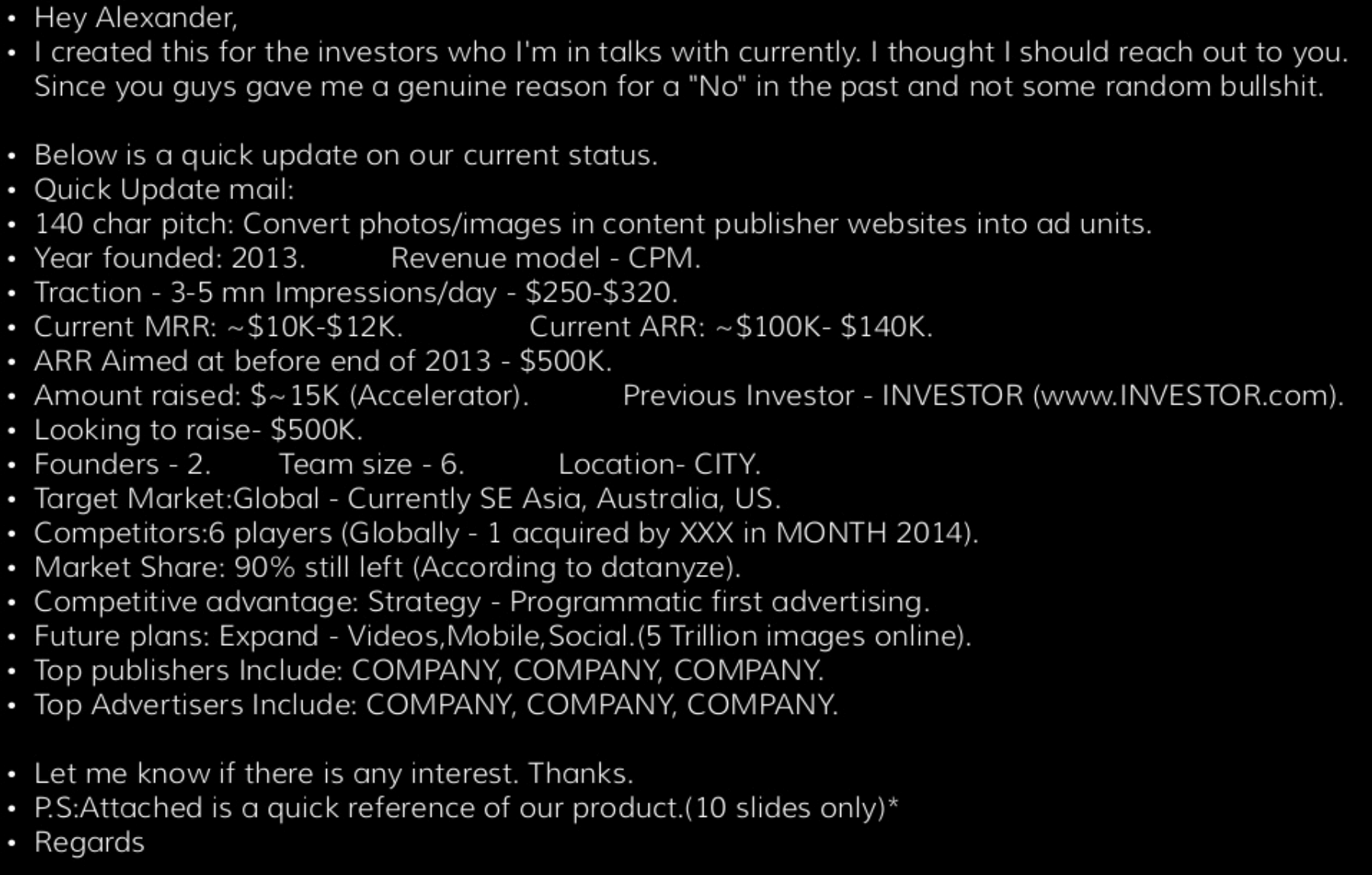 So back to what I was saying…

When I started VC I discovered the whole ‘oh my god… so many pitches’ thing. Yes, that’s a thing. I became process orientated. I really started thinking about my own ‘time and motion studies’ to attempt to have a social life.

Pitches were a system I could optimize.

I also realized there are biases to manage.

I decided I would only ever do the first meeting over a call with founders, then only do meetings when I was interested and had done some DD. Not only are calls way more time-efficient for both parties (Really), but it removes bias of liking founders and not the business model first. I want to fall in love with the company. I like lots of people, it doesn’t mean I will write them a check for $1m.

On a call, I will pound you with questions, cut you off if you meander, and get my head around if this really is a VC case in the shortest period of time possible. If I’m interested then let’s get to know one another. Knowing your stuff on a call is basically a pass-fail test. Later, in person, I can see if you can sell, if you seem honest, or even if I want to spend the next 7 years with you, etc.

Next, I wouldn’t accept any ‘teaser’ nor ‘we can pitch it better in person better’ BS. Just send me your full deck. Here’s why if you want to know (Tl;dr: if I am interested I can choose to read more without having to wait): Why I want a pitch deck before a pitch

I can read faster than you can talk. Great companies have figured out something smart, and the business model needs to make sense. I can tell that rapidly. 99% of startups are far from fundable and I don’t want to get stuck on a call if I figure that out in 2 minutes, which is hard to tell with a teaser.

The faster I can triage the better.

An obvious question, do I cut off founders on calls?

Yup. All the time!

Sometimes I’m too soft and let calls drag on though. Cutting people off when you know you are wasting your time is actually really hard. It’s needed, but I hate doing it.

Investors know what they want to cover in a first call- it’s the market, team, problem, solution etc. They ask questions to elicit these points faster, especially when founders aren’t talking pragmatically and commercially.

Do you know how many times I’ve heard founders say “we know everything about our business but we don’t know how to communicate it!”

A lot. Especially since I started Perfect Pitch Deck where I actually help founders write their deck and they have to be honest with me.

If you can’t communicate your business, how the hell is an investor meant to get it unless traction clearly speaks loudly for you?

If you are bumble fecking what you are saying, obviously an investor is going to cut you off, rephrase the question, try a different tact. They need to triage you asap so they can plan their next Burning Man trip.

I mentioned that I would cut off founders on calls all the time in order to get answers to the questions I wanted regularly and that I know what I want. But what about in person? Surely getting asked to leave isn’t fun, right?

Well, no. Not actually.

I explained part of the logic behind my system to serve the point it prevented that ever really happening in person. No founder that I really wanted to chat to wasted time driving over to me only to have the meeting end in 10 minutes. I already had decided there was something there and the meet was to see if I wanted to progress. The meeting was not to find out what your idea is.

So many people seem to just want to get a meeting, but why? You think that means something? You don’t want to send your deck before a meeting as you think it will spoil the surprise? Ummmmm…. you prefer to get your balloon popped in person? Mm’k.

I’ve only ever had maybe 3 meetings where I was waiting to find the right moment to end a meeting as they turned up to not be as good as I thought they were almost immediately (Hey, you learn). I’ve had meetings where I know I’m not interested but we get on really well and we chat a bit longer. I’ll say I’m not interested as there are issues and then I’ll talk them through with the founder. I’ll obviously do this more if the founder really seems engaged and wants to learn, right? Who will waste time with people who just say ‘whatever, you don’t know what you are talking about…‘ Being liked is really important.

I have however had occasions outside of my process where I just thought what the actual feck!

The times that happened were in ‘favor land.’ Ergh, gross. Those times you get asked to meet someone… and, well, yeah. You meet them and you just are wondering what the person who introduced you was thinking.

I really think to send a deck in advance and then do a ‘triage’ call just culls the potential for these awkward experiences.

Jason Lemkin wrote this on Quora regarding cutting meetings short and it basically mirrors my experience:

Generally, this only happens in a pitch that was a cold intro, or a “favor” meeting. Otherwise, generally you can screen out the folks who are unprepared ahead of time just looking at their deck and materials.

But I’ve never had this happen in a meeting I “electively” took. Only when it was one I reluctantly took, a favor meeting.

So I try not to do those anymore. They aren’t really a favor to anyone.

If you get asked to make intros yourself, be careful.

To wrap this up since you should get the point by now… Meetings ending is a good thing. Why?

If your next meeting ends short, take it that you sucked at pitching and need to improve.

If you get cut off, internalize you did not answer the question well.

Action: Dynamically adjust and start answering the next question better. Internalise you aren’t doing a good job in communicating and try something different