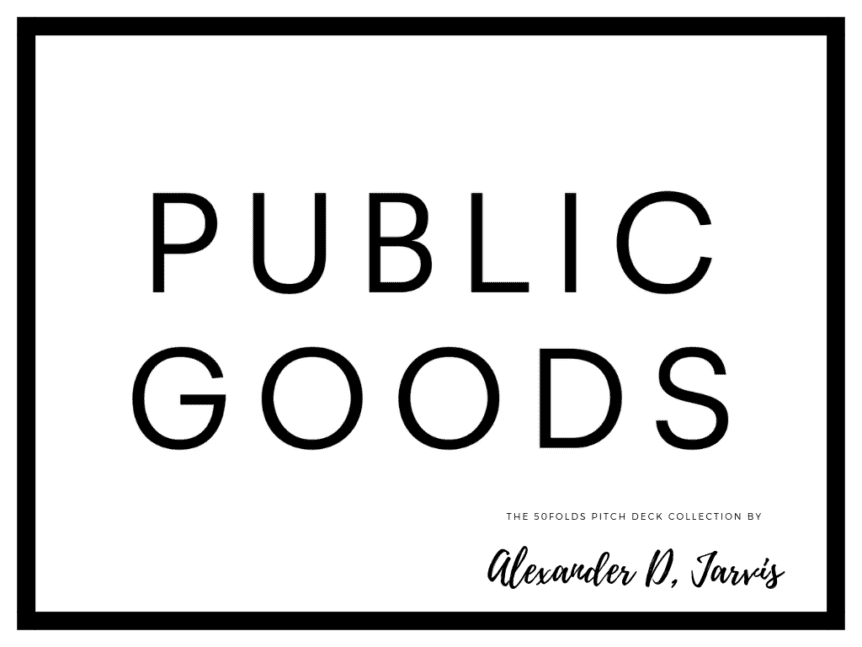 This is the Public Goods pitch deck to raise their $6m seed round in 2018. Public Goods was founded in 2015 as an online marketplace of over 100 products (from paper towels, to toothpaste, to food products like pasta or apple sauce) with one common brand to make healthy products affordable

There are a lot of companies doing the direct to consumer (D2C) thing. These guys think that’s an opportunity, but are thinking more broadly.

Brands like Harry’s for razors, Warby Parker for hipster glasses and Allbirds for shoes have been built large startups (initially) without physical stores and by disintermediating wholesale partners, delivering quality products at a reasonable price, with some modern branding.

Public Goods see a flaw, however. Apparently, over time, people will become tired of having to buy different products from different brands. Ok… Not sure I agree, but there is a thesis there. I think that makes sense for commodity, disposable household goods, and not for things seen out of the house.

It’s basically just Costco with private label products. They charge a $59 per year membership fee for the pleasure of purchasing from them. I presume this is some Prime like mentality where once you blow $59 you feel compelled to spend more. Hey, Deliveroo compell me to buy from them with my membership to get free delivery (I order a lot- how do you think I find the time to blog for you!?).

They aren’t focused on coastlines (SF and NYC) or in major cities across the US, but rather secondary cities and suburbs. They are trying to position themselves not as a cool hipster brand, but a brand for practical people that want to buy healthy products without the price. Maybe that makes sense. Let’s see. There is a reason startups focus on big cities.

I have to say I like the idea. I disagree on the positioning. It is an idea I had in my head for some time. I don’t care about a brand for so many things- I just want quality at a non-branded price.

They aren’t the first to execute on this either, though. Their biggest competitor (Other than Amazon who rips everyone) is Brandless who have raised about $300 million to date. I don’t doubt there is money in this sector.

They have a crap CrunchBase profile, so I have jacked this from their website… Excuse the BS…

We’re on a mission to make healthy products affordable and accessible to everyone. Most brands go through four suppliers before selling you a product. That adds cost at every step. But we’re changing the supply chain: for a flat annual fee, our members have access to high-quality essentials without the marked-up prices.

We work obsessively to develop the perfect version of each product. Then we have our friends, family, and the pickiest people we know to test every last thing. There’s only one kind of each item in our store, so you’re guaranteed it’s the highest quality without the headache of comparing endless options.

Did you know that there are over 1,000 unhealthy ingredients in common household and personal care products. They’re linked to cancer, hormone disruption, and a host of other harmful effects – not just for our bodies but also our environment. At Public Goods, you’re protected because we use only safe and healthy ingredients that are good for people and the planet alike.

We design our goods to be as beautiful as they are functional. Other brands use brightly coloured bottles to stand out on a store shelf, not sit beautifully in your home. Our packaging is clean and simple — designed to complement your space, not visually assault it with ads.

Eh. The deck basically says there needs to be someone to make non-branded, but branded e-commerce stuff that is cheaper. We have some numbers, but not too many. Give me $3m.

I sort of like the idea. The deck is pretty. There is some logic, but eh.

There isn’t a lot of text. They are fairly minimalist.

There are 15 slides. I had to count since there are no page numbers.

It would be a lot shorter if they made 4 slides one and removed the lame ass end slide. i.e. 10.

They don’t do headers as I do, but they sort of have them. There is a declarative statement on each slide.

The slides flow. There is a bit of a story for what they have. It’s just a short story.

Things are aligned well. There is negative space. For the content they have, it’s good. They very likely used a designer of some sort.

The deck is a bit lame. There are a lot of slides missing with regard to how they are going to build the business. This is more than likely not their full deck and is being used for PR purposes.

Slide by slide review of the Public Goods pitch deck

The cover is solid. They show some of their products and instil a sense of their brand. They don’t need to write ‘our mission’ as it is implied.

Morgan doesn’t need to add his email on the cover either. Investors have it as he emailed them, duh. 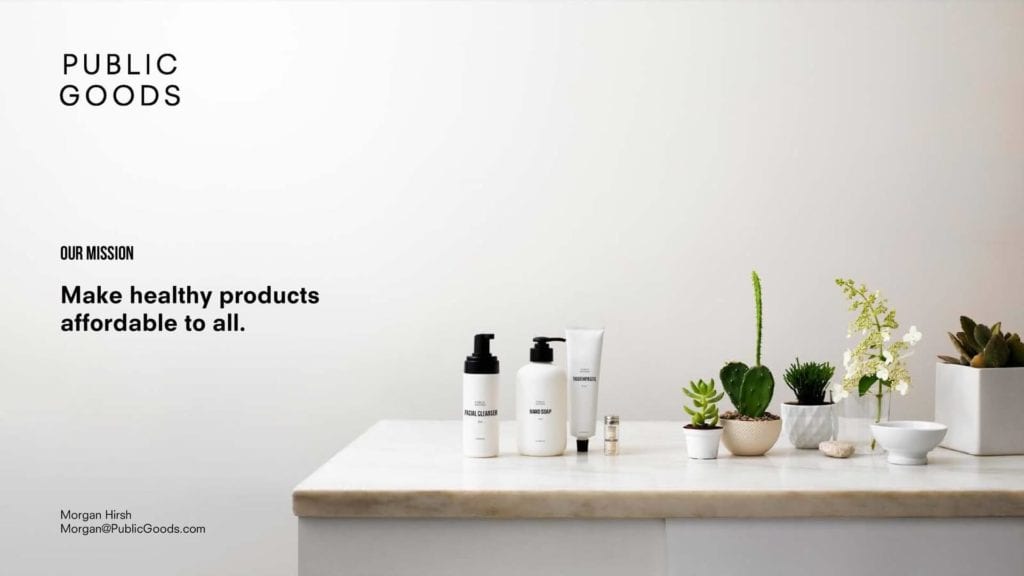 They start out the deck with the team. If you have a top team, this is often a good idea. It makes investors think that anything that is said after is credible.

One investor blogged that a top team pitched them and it was on like slide 10 that they mentioned who they were. The investor was like WTF. I’ve been listening and it’s only now I realised you are rock stars. This dispels the doubts I was forming.

That story doesn’t make sense since the investor wouldn’t have taken a meeting without knowing who the founders were in the first places, but you get my point in any case 😉

Ok, so do these guys matter? I’m writing this as I read. There are some big logos. That’s the first thing I notice. Then there are two dudes hugging in an empty warehouse. Now I read the title. They have manufactured stuff before. There is then tiny ass text to see they saw an opportunity. Don’t write tiny text.

I don’t care that you studied philosophy buddy. Growing $5m to $10m in sales is ok. I’m not in awe. Michael grew something from scratch to $4m in sales. That’s decent.

I don’t see the connection to manufacturing for brands though? 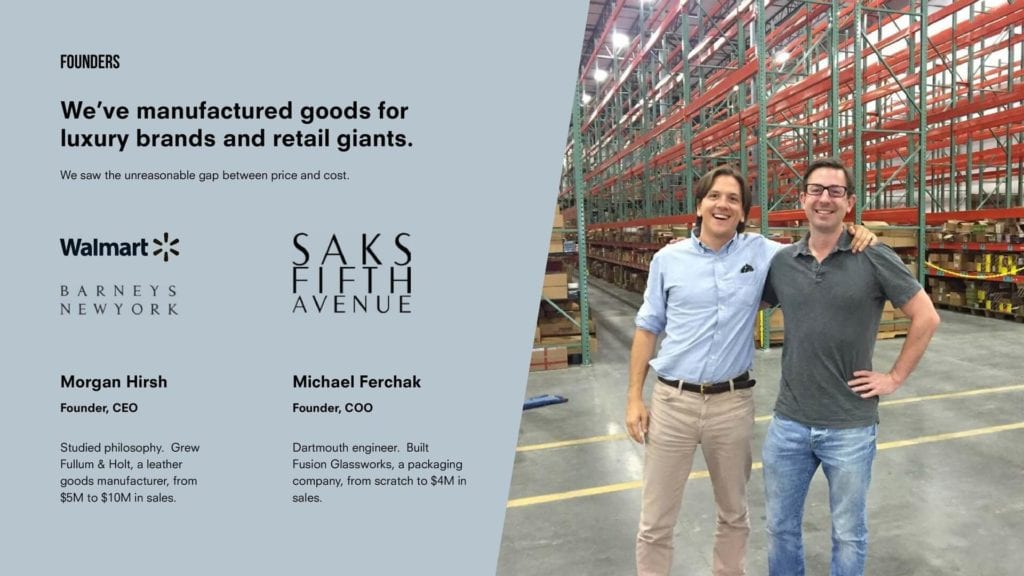 They kick off with a future they don’t see. That’s modern brands selling stuff you want.

A lot of brands for each product? I know everyone loves Amazon as a source but aren’t they better places than a startup who is going to make all of these? I would favor the best for each product. Why don’t they just partner with the D2C brands and sell their products? That’s not a terrible idea tbh… Hm 😉 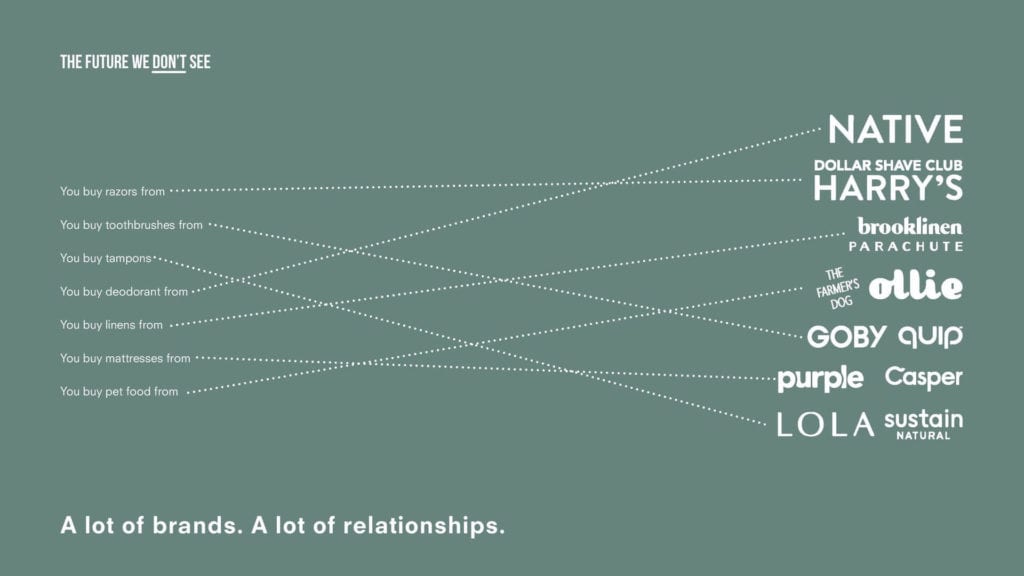 Now they believe in something. There are two things. They don’t tell us now. They duplicate slides… waste of slides. 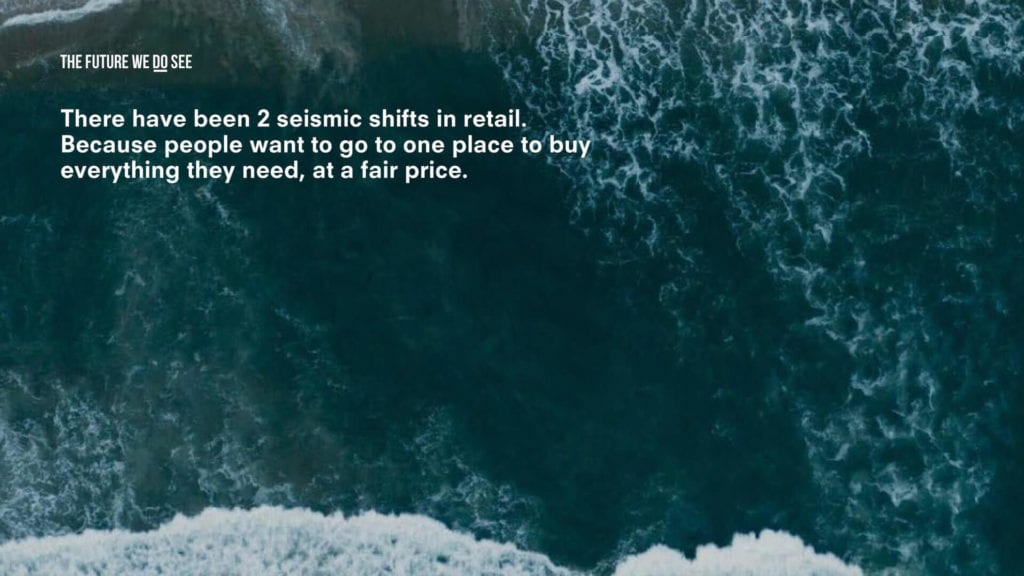 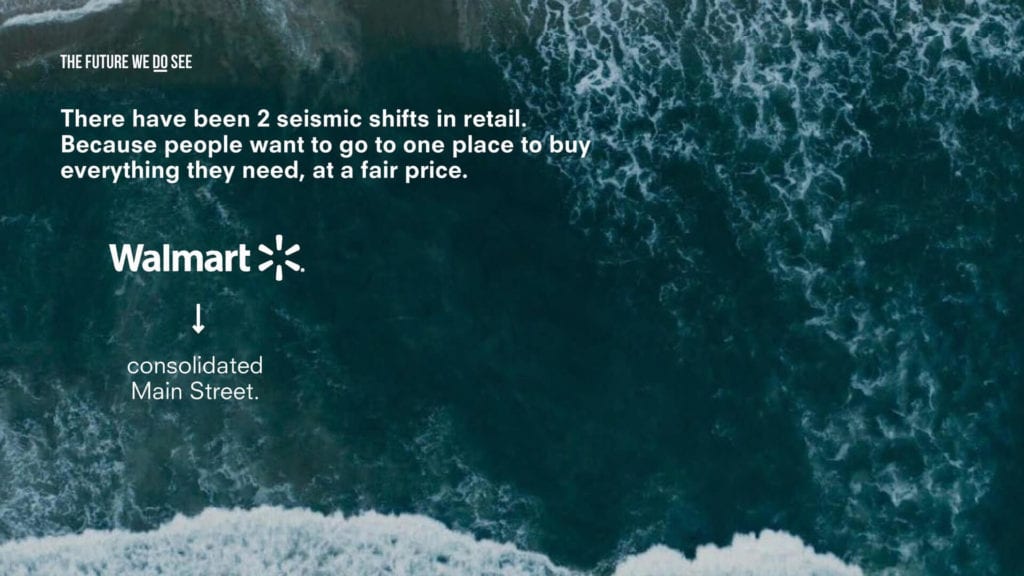 Amazon did ecommerce. No data to prove. 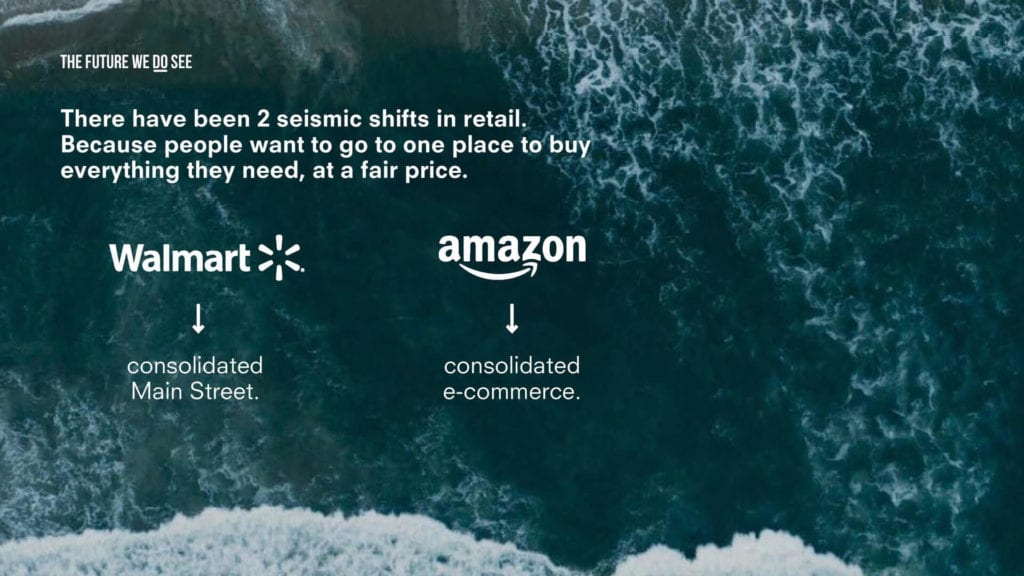 And now Public Goods will do this for D2C. That could have been one slide… No shit Sherlock. 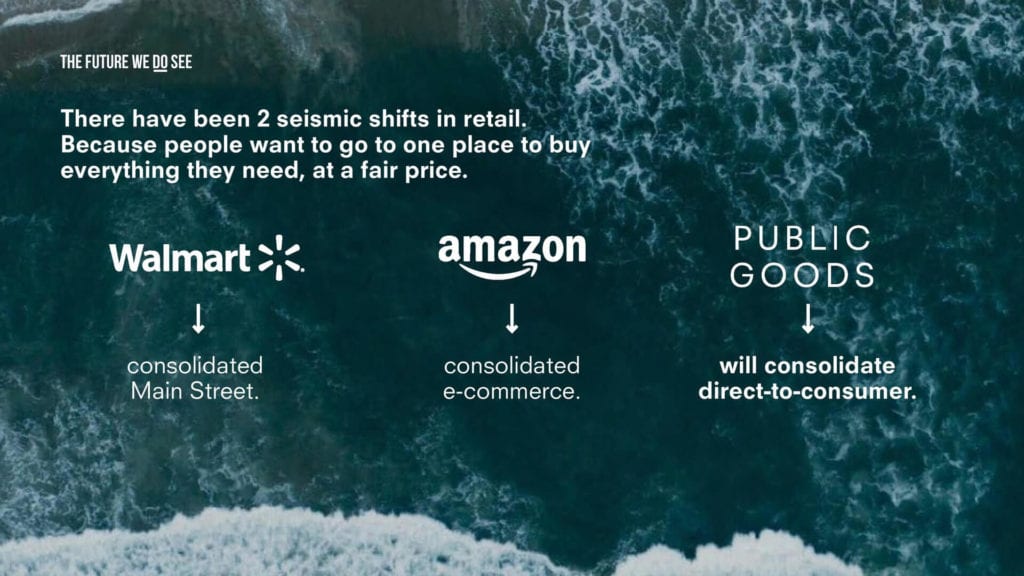 Quit with the tiny-ass text dude.

As I guessed at the start of the blog, their membership goal is to get people to buy more once they get them. There is no data on the funnel to support any of these claims. They chuck in the customary value chain disintermediation without explaining it. It’s like they assume that investors have seen this shizzle before. Warby Parker at least had numbers when they did theirs (you can google it in images). 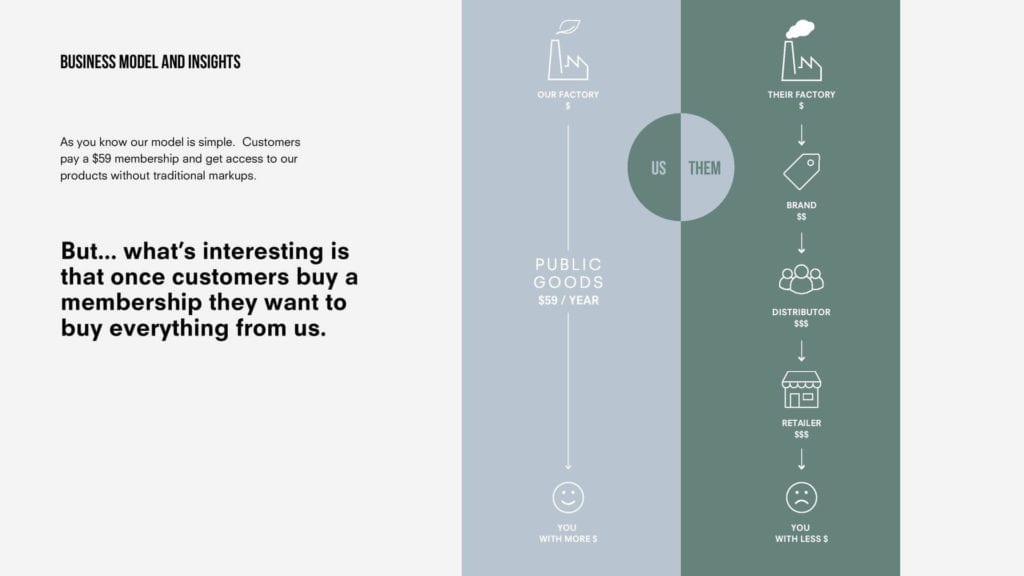 They think people don’t want to buy from multiple websites for a convenience reason, which they term as relationships.

So buy everything from one place at half the price of Amazon and Walmart. Solid idea. I like not spending money on pointless shite. How about you? They show real examples. I like specifics. 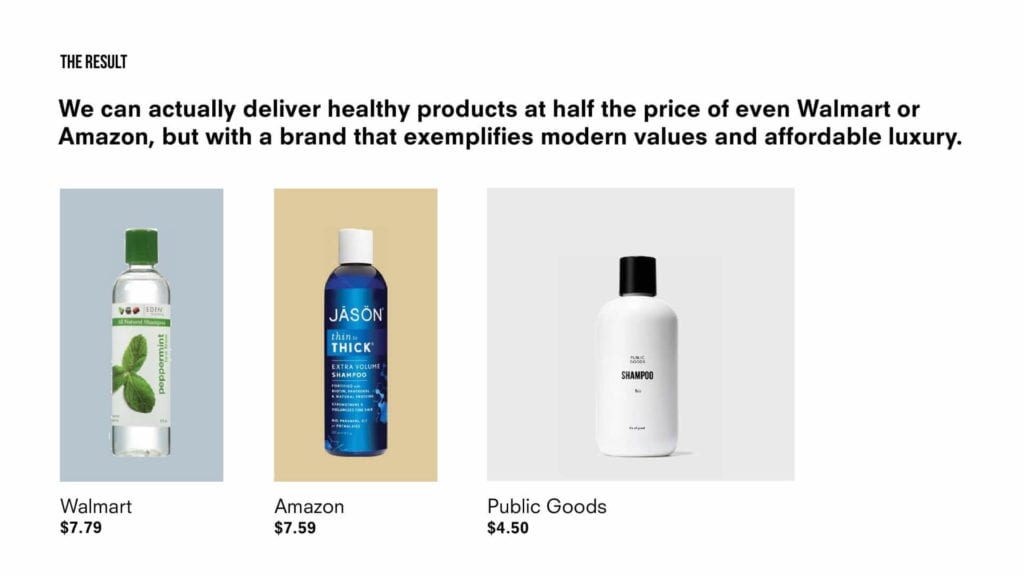 They then get into numbers. No messing around.

Cohorts are like ninja level data presentation. They aren’t that complicated but most people don’t present them. I immediately think positively about people who go there.

Nice. 60% of users have a repeat order. That’s a fact. Hm, well it is for the September cohort. Their cohorts aren’t all roses. Look at January- It’s 19%. They don’t have enough data to really make too many assumptions, but it’s ok.

Saying 95% of people say they will buy is like your mate letting you pay the bill and he will get it next time. TBD… 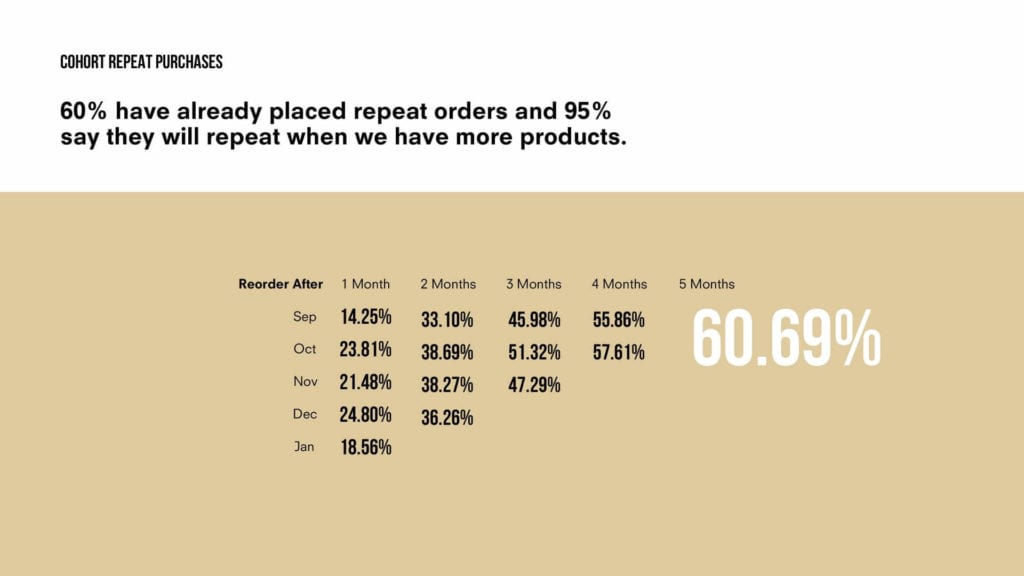 NPS is Net Promoter Score. They claim they are in the 98% of their industry but there are no benchmarks. That doesn’t feel credible to me. According to here Warby Parker last reported their NPS as 84. That’s a lot higher. 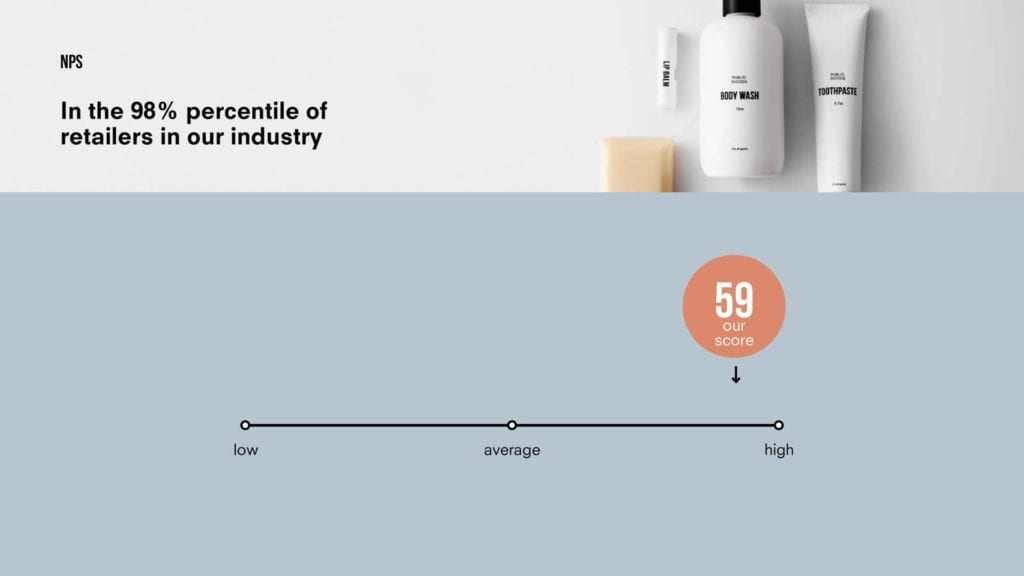 Seems like they are going to market via business partnerships. They list 4 brands but no actual details. I was in WeWork in SF on Montgomery this week. They aren’t there. 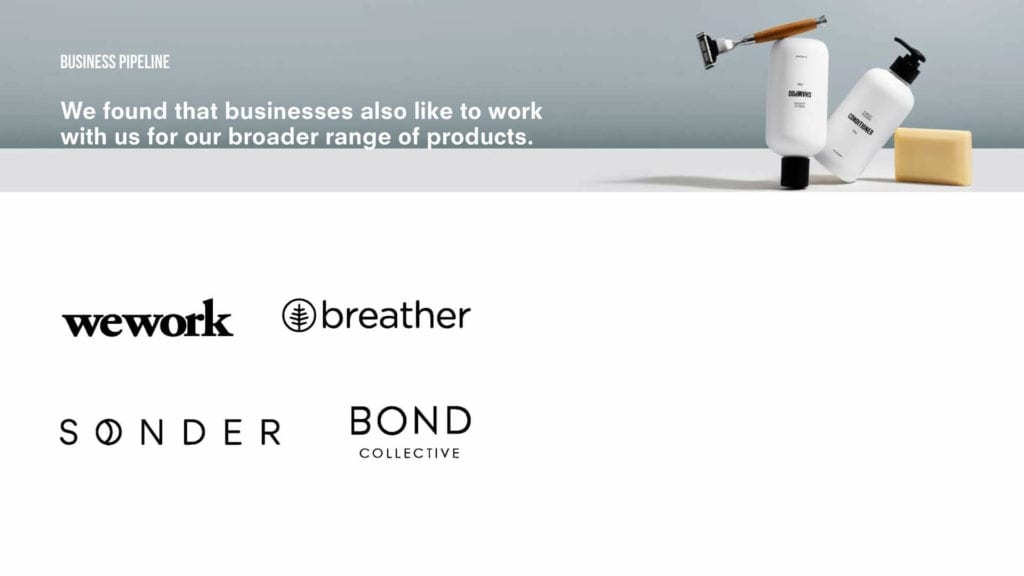 Money time. Fancy slide. They are raising $3m. There are arbitrary allocations. Not that informative. Tells us the product lines they are initially focused on though.

FFS. A values slide? Who cares. 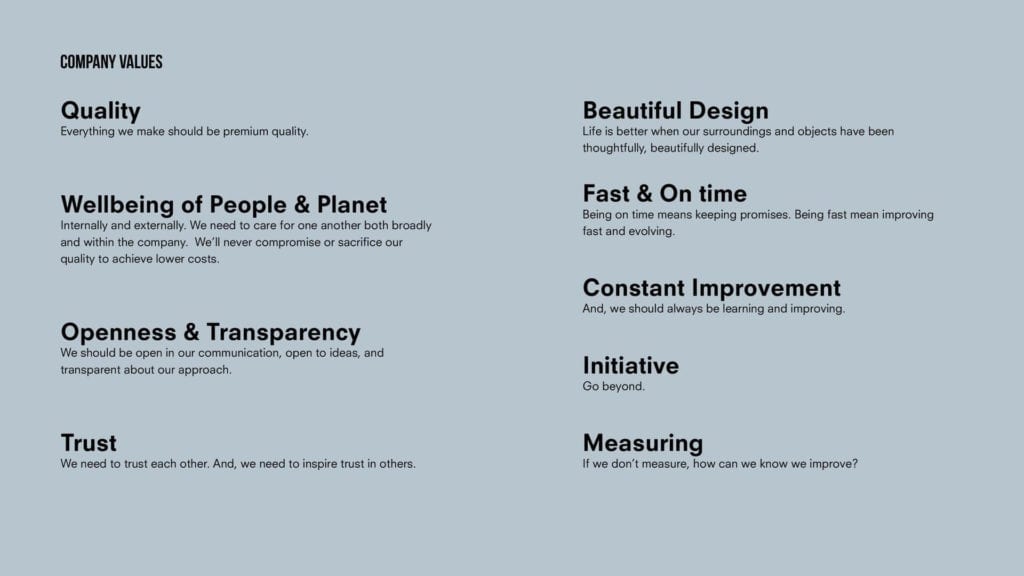 This is a waste of a slide? What is the point of it? 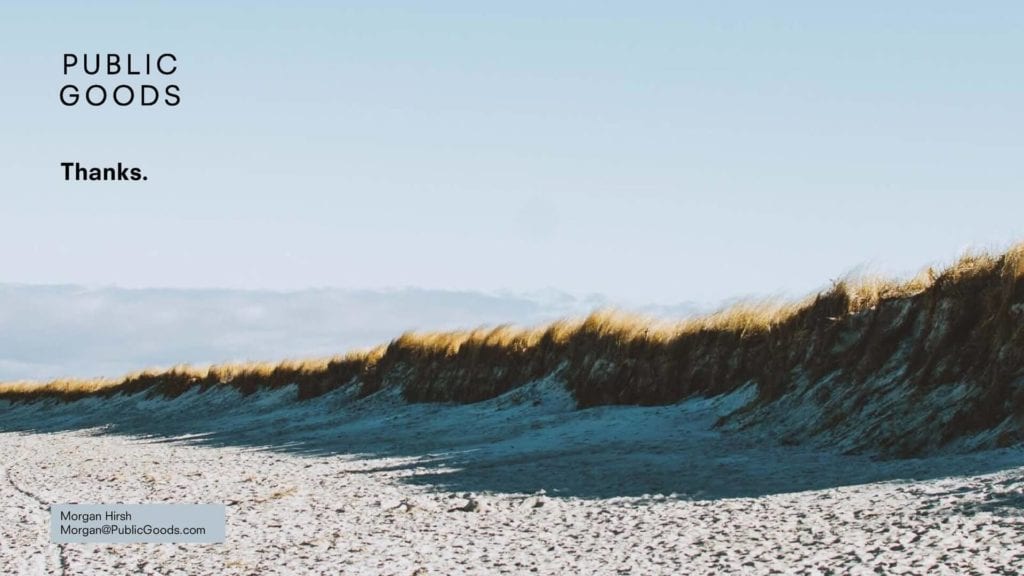 What do you think about the Public Goods pitch deck?