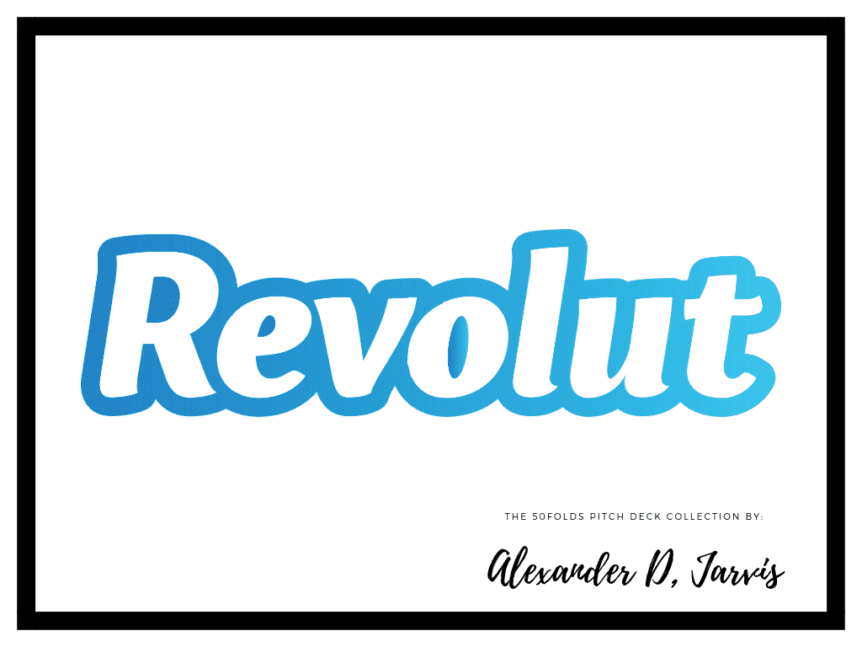 This is the Revolut pitch deck used to raise a £1.5m seed round of funding.

Revolut is a digital banking alternative that includes a pre-paid debit card, currency exchange, and peer-to-peer payments. It is on a mission to build a fair and frictionless platform to use and manage money around the world. It has developed a platform allowing users to transfer, exchange, and spend money with a multi-currency card that is accepted everywhere.

Revolut currently supports spending and ATM withdrawals in 120 currencies and sending in 26 currencies directly from the mobile app. The company is based in Wharf, London and was founded in July 2015. 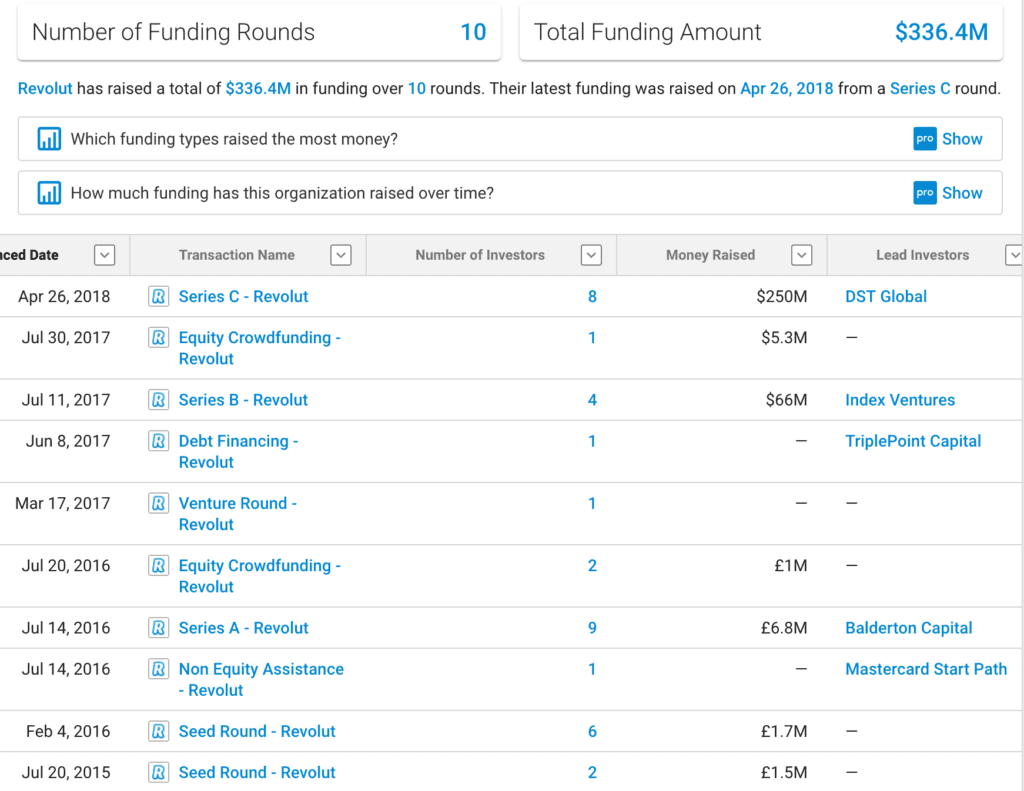 By most accounts, this is a pretty ugly deck. It’s not something that you learn from. Airbnb is a rubbish deck too, but it’s well structured at least. Whilst they do a lot of things wrong, you do actually get the sense that they are solving a real problem and that there is a market there. These are the two things that investors really care about in the early stages of evaluating a company. And frankly, if you as a founder have enough to get a meeting that’s really all that matters with a deck. The key thing is what you say when you get a meeting and the following ones till you get that investment.

A rubbish deck is symptomatic of the comprehension of your business and the market you are in. A lot of times I see decks that are crazy rubbish- there is just no info. These founders are either lazy or ignorant. on the other end of the spectrum, you have founders that write decks that are in-depth research papers. Ain’t no investor got time for that (now). I had a meeting this week with a really smart founder that knows EVERYTHING about their business. It’s impressive. But he pitched a tier-1 firm and had them feeling bamboozled with information. That’s also bad.

Revolut have clearly done well. They have raised over $300m. The deck really is not great, but despite this, I wouldn’t have rejected them straight out.

Too many words are bad. In their case, there is a distinct lack of sufficient text to adequately explain things.

You should not let investors draw their own conclusions. You should tell them what to think.

The founders aren’t dumb though. They have sort of copied a minimalist approach as Airbnb did. What they have written is fairly interesting. You get what they are saying and what they write is pretty meaningful.

At 12 slides, the deck is at the short length. It’s ok but it doesn’t cover everything I would want to know. I’m pretty much forced to meet the founders and get them to explain things. Now, you think, SCORE! I just want to get in the room, bitchez! Nope.

There is no way to get real money without having the answers investors have.

Terrible. They have filled out the ‘Sequoia format’ and the slides show it. Problem, solution, market size, yada yada. Yes, They have covered what they need to, but writing ‘problem’ is such a missed opportunity.

Instead of writing “problem”, tell me what the problem is!

Which one communicated the message you want to make faster?

The deck isn’t designed. They have done the bare minimum. I run Perfect Pitch Deck and founders seem to think it’s about ‘design’. It’s actually not. Content is king. Structured communication is far more important than ‘looking pretty’. In fact, designers who make ‘pretty decks’ actually mess up your deck! They focus on pointless pictures and not the message. They are designers so they think about aesthemtics, not sales.

They have done the bare minimum, whilst also doing something. There are some icons. They try structure, but it really looks crap. I don’t sense that they really take this seriously.

Now, there are some people that don’t care about appearance at all. Oli Samwer would chastise MDs for spending time on formatting. He’s not an investor though, strictly speaking in this context. The MDs are meant to be executing. But yes, a too fancy design actually communicates to investors you are taking the raise too seriously. No one thinks a ‘try hard’ is cool. But if you make no effort, then investors think you don’t care. You want Goldilocks. Enough to show you care, but not enough to insinuate you are desperate.

Everyone loves a good story. Can you see a story in this deck? No.

The just filled out the ‘Sequoia template’. Yes, they have communicated information, but they haven’t sold.

Things are generally aligned. Images are all in line. Headers seem to move left a few centimeters every other slide. There is negative space (which is good).

They cover most of the key slides, but not all.

You should start your deck explaining what you do in one line so investors don’t have to guess. You want to spoil the surprise.

The problem typically needs about 3 slides to really set up and explain in the context of the industry. There is one slide on the problem.

Timing matters. It’s often hard to write this though. Nothing.

The cover slide is easy. There are just two parts:

You don’t need to add contact details. You emailed the investor already through a ‘warm introduction’, right? They have your details already. It’s adding to the time it takes to read your deck. Less time is better. 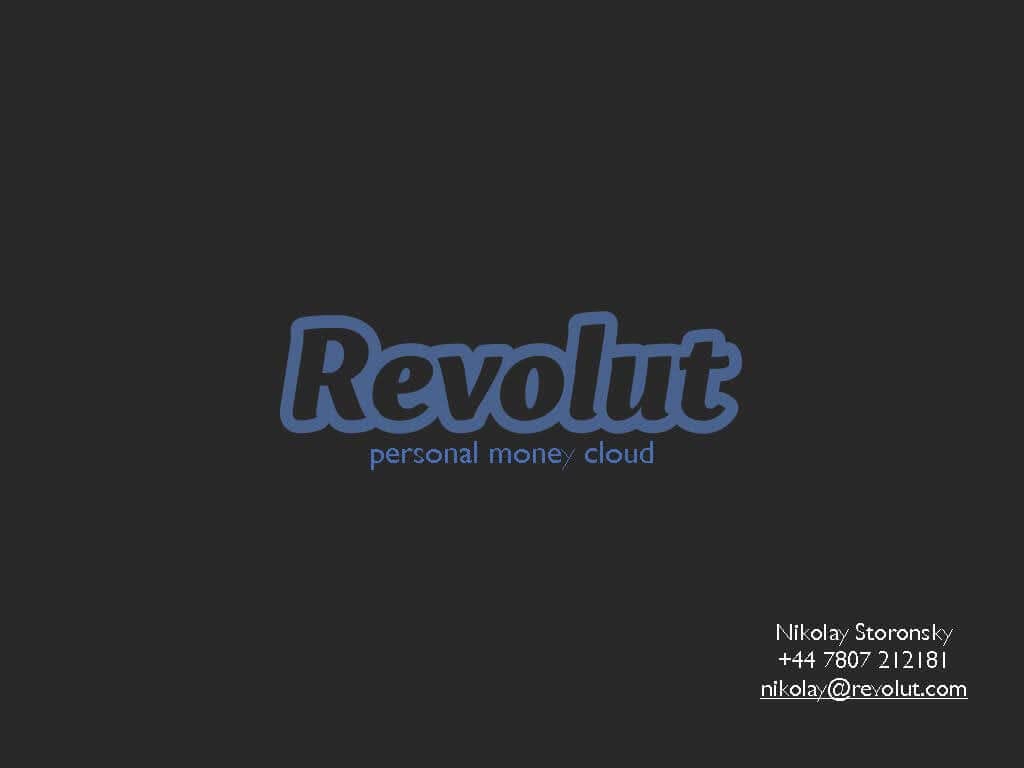 The problem really matters. If investors don’t think you are solving a painful problem that matters and is a priority, who cares? End of discussion.

They say it is expensive, inconvenient and sneaky. That’s fine. The apply the rule of three. Wouldn’t it be better if they quantified those three key variables with data? Yes. Yes, it would. No one trusts you. Investors can trust data though.

Stating the industry has not been disrupted is a double-edged sword. ‘Disrupt’ is such a cliche. Very few founders really disrupt anything. They mainly disrupt the bank accounts of investors. TechCrunch just trains founders to think they have to be disrupting something. In fact, TC’s conference is called TC disrupt, lol. Be real, if you aren’t really disrupting things, don’t say it. 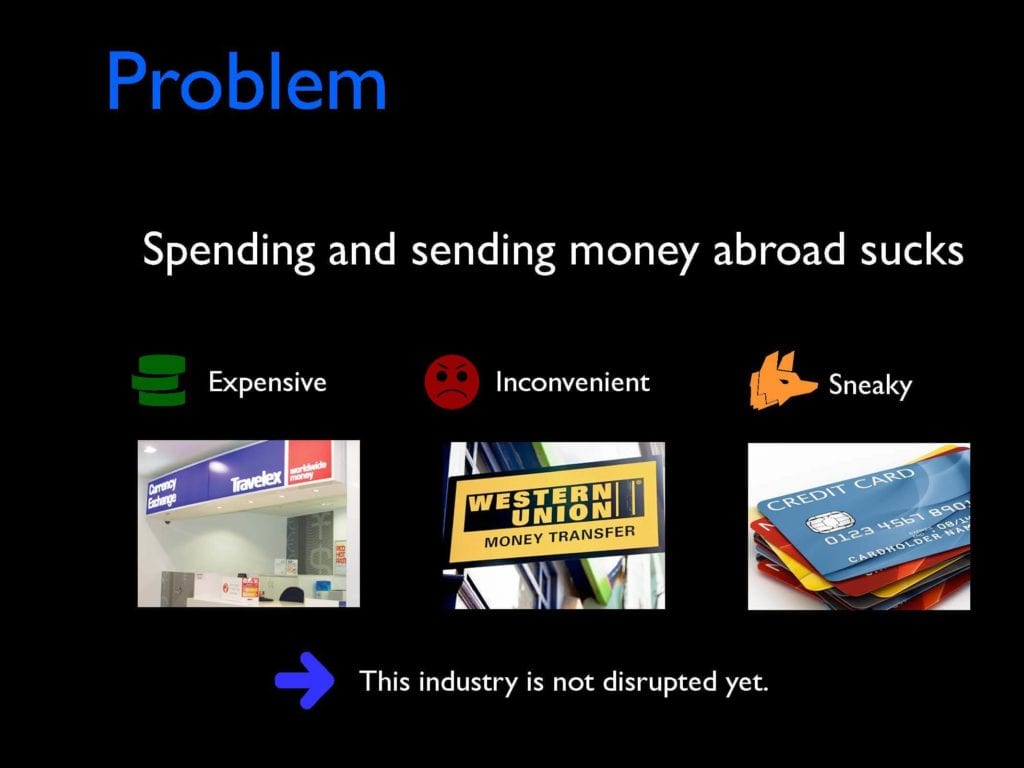 Market size is so key. You can’t generate VC returns in a small market.

They start with general x currency, then lost fees on the spread and then the travelers and expats. I have to guess that is the segment they are focused on. A simple square line over that would be a way to highlight their target market, but I don’t know.

They do say that the UK is their initial target market though. But that is the extent of their focus. The simplest way to add credibility to numbers is to add a source. There are no sources.

Note: Never have a sources slide! Add them in size 8 italic font on the slide. This doesn’t draw away attention from messaging, but it shows attention to detail. 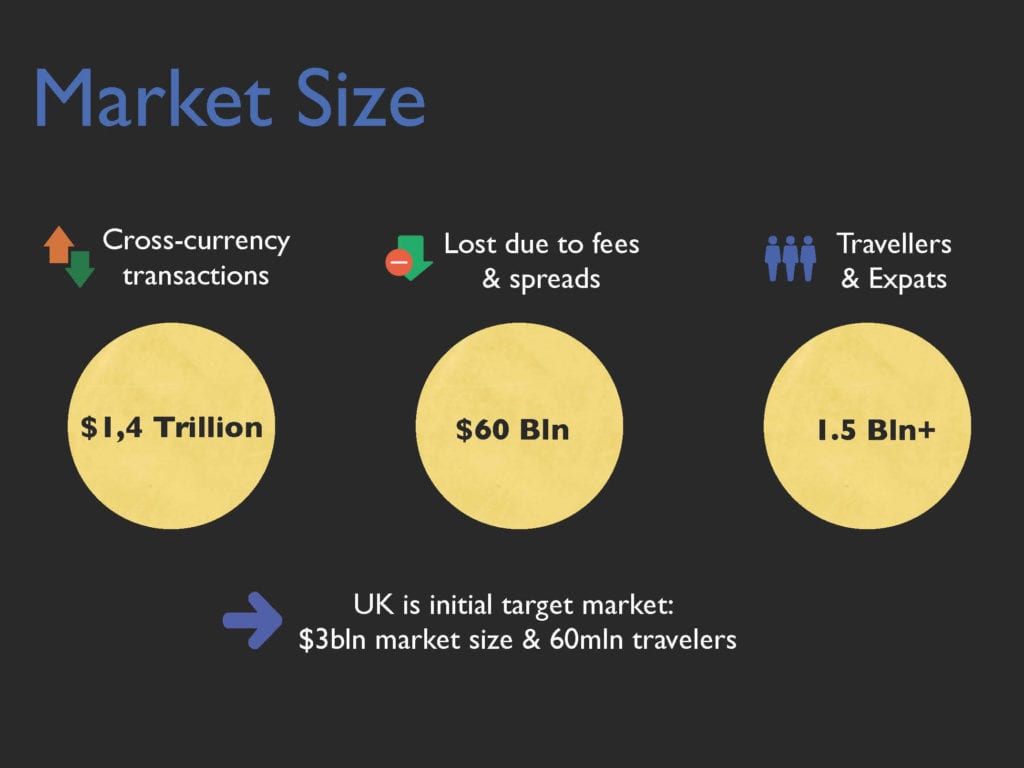 This is terrible at explaining how the product works. I know nothing looking at this. There is some currency exchange stuff, sharing and I guess you get money to buy stuff? Explain it to me.

I don’t share a demo on the slide. It is a waste of space on a slide. Put it in your email instead. 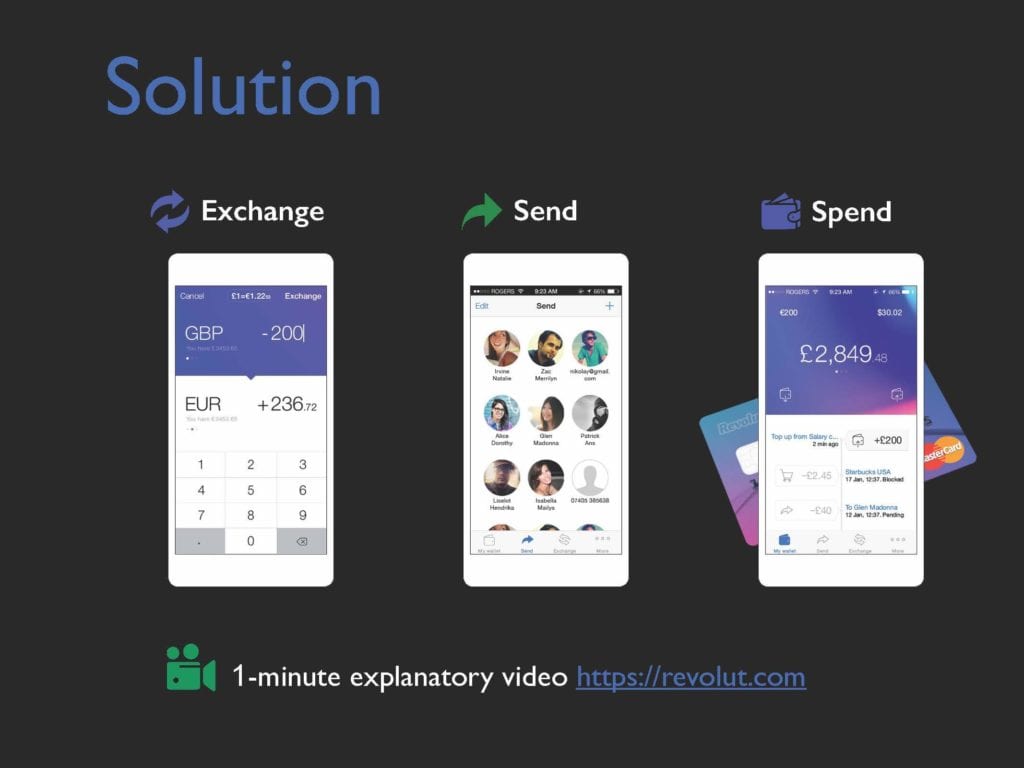 This slide is weird. FirstLY, they say freemium which means they give shizzle away for free… and for many businesses that could mean forever. Who knows. Then they say ‘viral’ which is another buzz word. No one goes viral. Want to understand more, read this on viral modeling. How is viral a business model? I’m confused.

Ok, now at the bottom is some text I have to spend time reading to understand what the point is. Ok.

So, they do free up to 500 bucks. That seems pretty high for normal people. Did you know46% of Americans cannot come up with more than $400 in times of emergency? So 500 pounds is a lot.

There is something about sharing with friends, and receiving rewards. This seems more like it is a marketing slide and they are going to do things for free, subsidized with VC money. Weird. 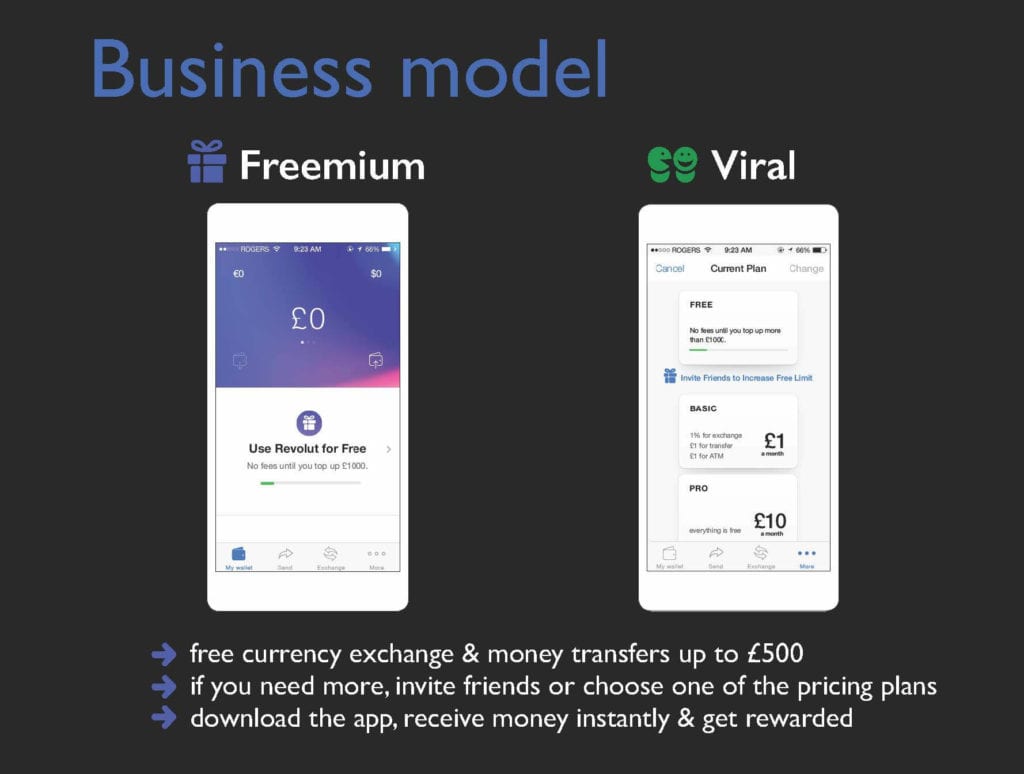 So this is how they are going to get users, I guess? It just says marketing.

It is good they are focusing on “early adopters” like a startup. Ok… now they have partnerships with some of the largest travel companies in the world. That’s obviously stupid if you know about corporate deals.

The thing that makes me a little interested is that they have picked up on a possible hack which is 80k members on Tech City. Who knows, but maybe there is a plan?

What I do with founders is pick one thing that is working and just talk about that, and add metrics as far as possible, even if they are incipient. 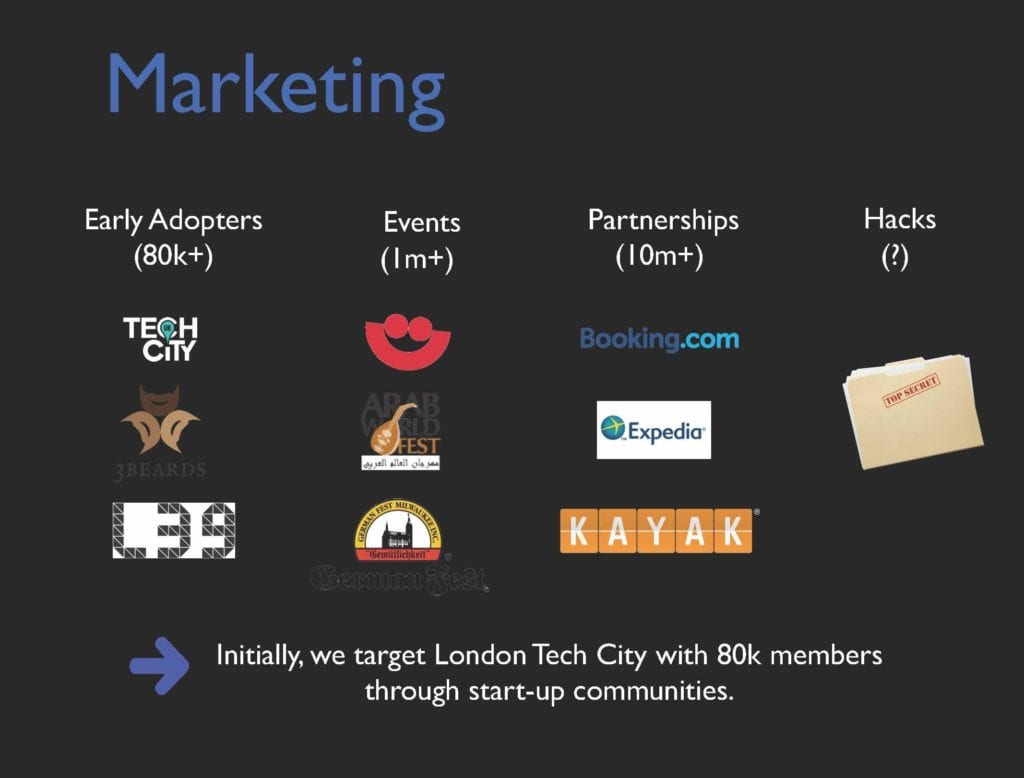 Their competition slide is a hybrid between your standard landscape matrix and variable based differentiators.

This slide is starting to get to be information overload. Typically better to have on two slides. Slide length doesn’t matter in so much as “time to read”.

Old players and startups are lame axis headers. If you do a landscape, the axis’ are the hardest things to figure out. Picking out the wrong ones undermine your credibility. Wait, that’s not clear. They are actually descriptors. The headers are actually “difficult and expensive” and ” easy and cost-effective”. I’m writing as I read. I didn’t rewrite this to show you that I am a little confused.

The issue here is I don’t really see the difference between Revolut and WeSwap.

“Example [sic] of use cases” is positive. I like that the factors aren’t trivial.

A statement like “The only product that solves…” needs to be backed up. 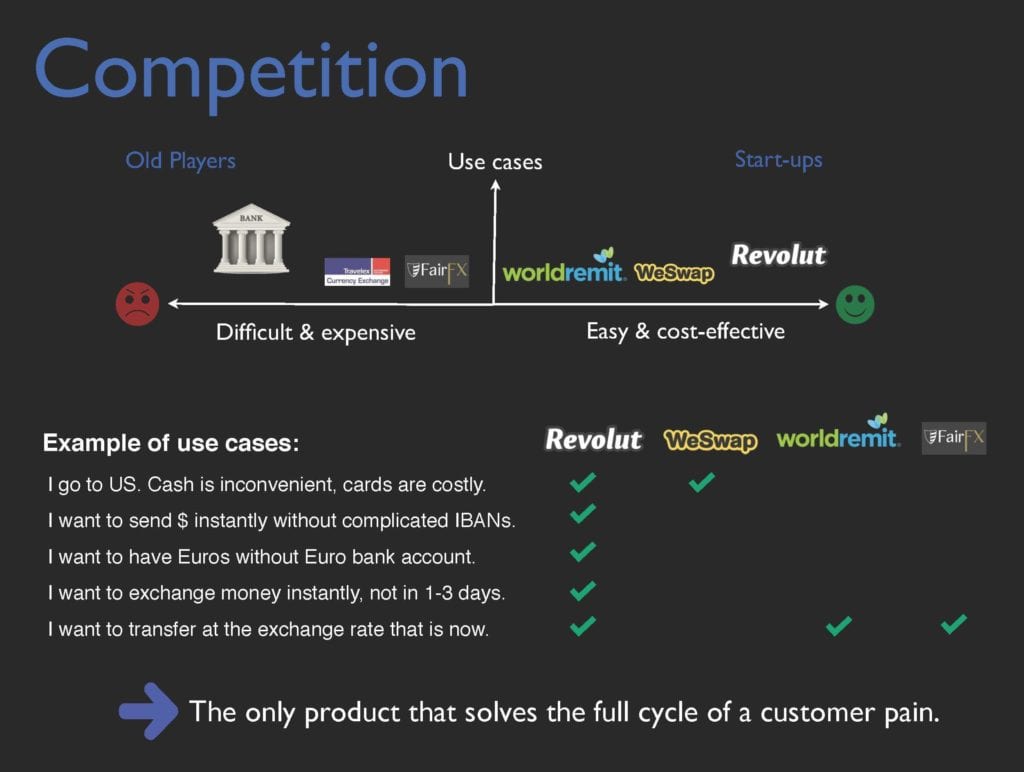 Why is “own infrastructure” better? Better than what?

Let’s be real “patent pending”? What is their budget to defend patents?

Viral features is optimistic without proof.

“Interbank rates” is intriguing, but not explained. 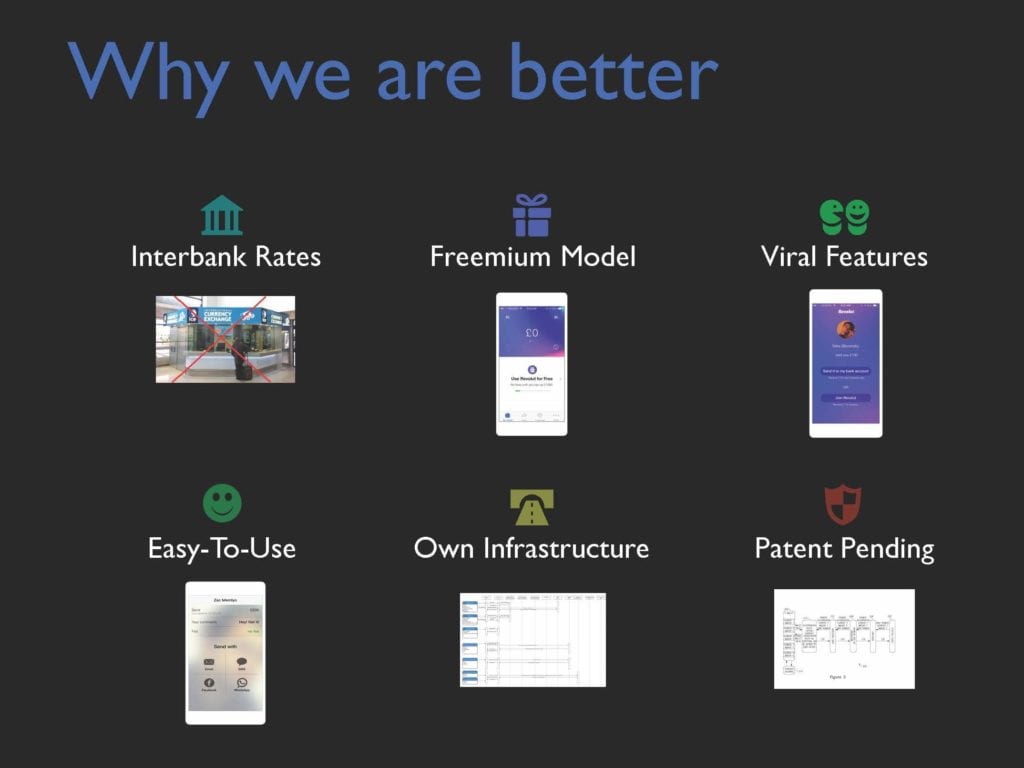 Traction is really hard to do.. when you don’t have traction. Ultimately, you have what you have.

Subscribers in one month show they have achieved a quantity… but it also says it is one month, meaning no trading history. A notable number is notable. A graph is better.

I have no idea what “deals” mean.

Awards and quotes are what you write when you have no traction to talk about. 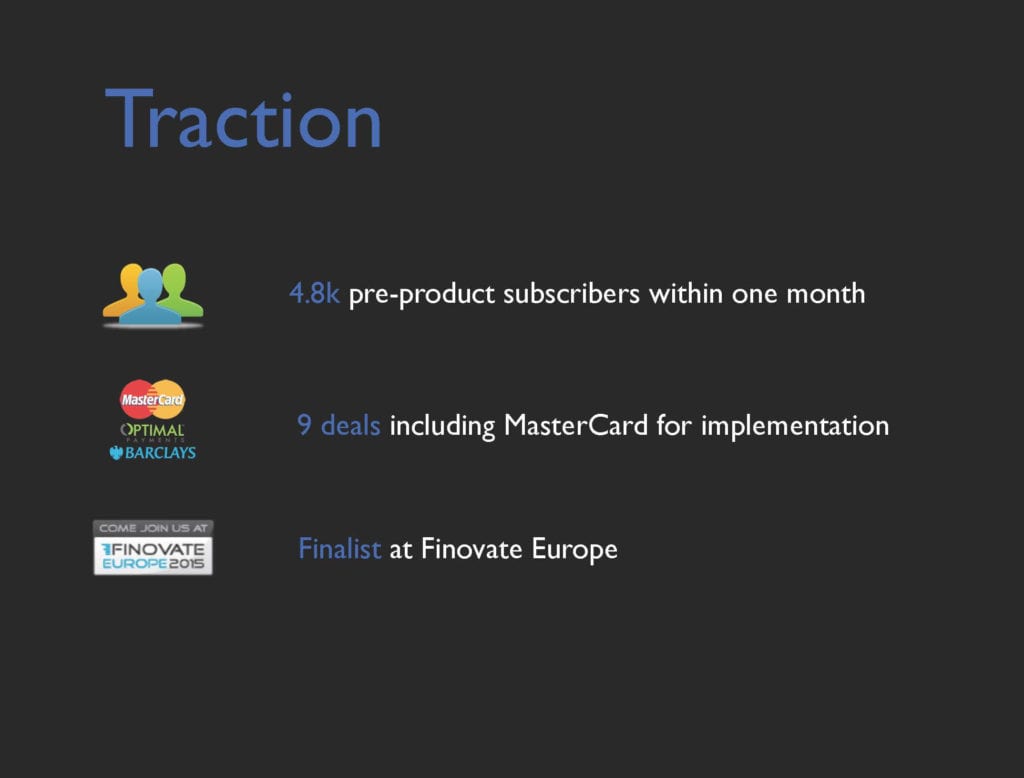 The team slide is a selling point. The team is the company. They matter. 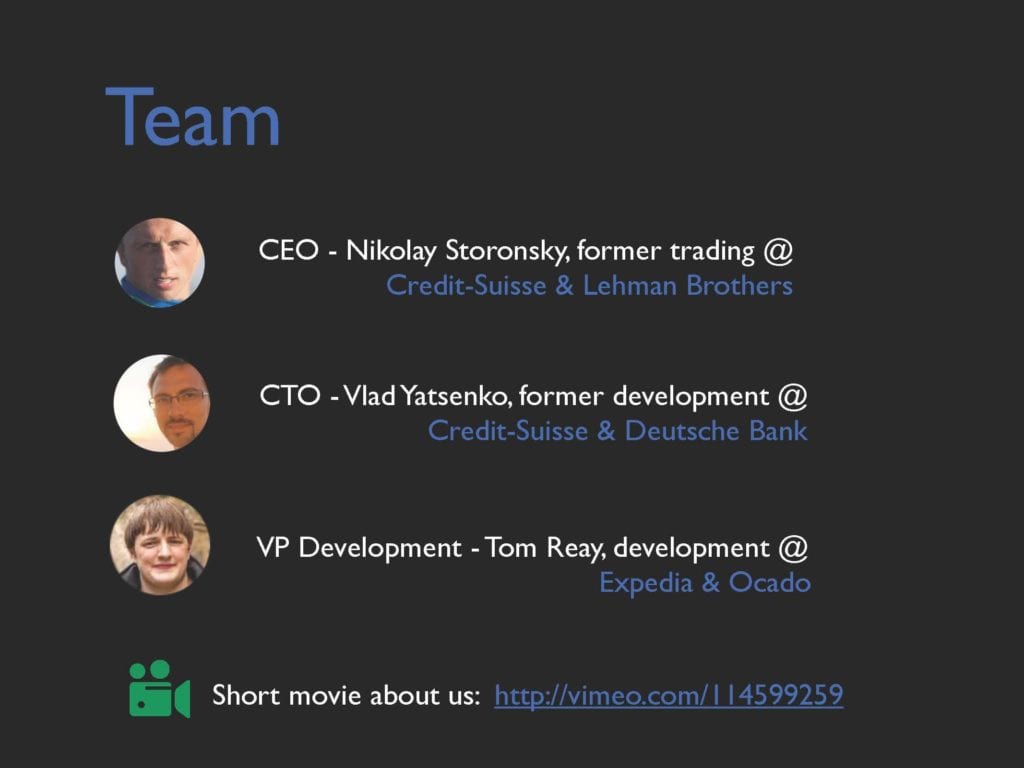 The ask is almost hidden at the bottom. Ok, they want GBP1.5.

Don’t use screenshots. Input data manually and format natively. There are too many line items.

I don’t put forecasts in a first deck. I invented a slide called ‘range of values’ which shows the potential of your business depending how you perform. 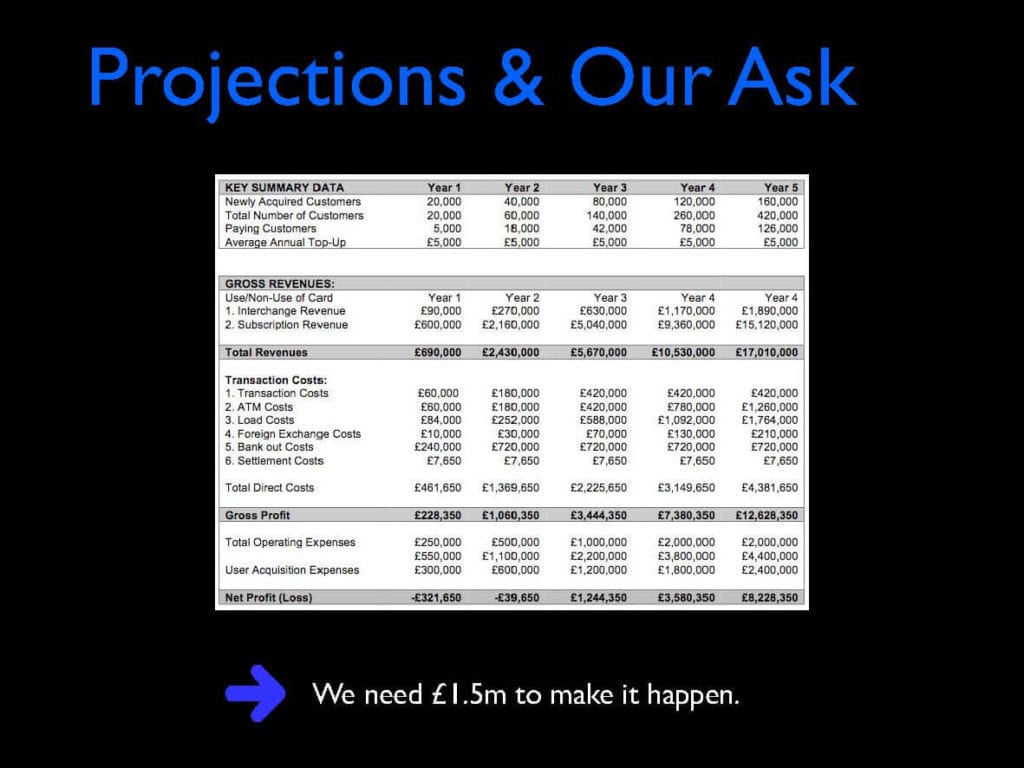 I put the ask and milestones on the same slide. They have use of funds on a separate page- fine.

The hiring and a specific target of MAUs is good. Preparing for a series-a is sort of a ‘not shit Sherlock’. The £££s are a bit crass. 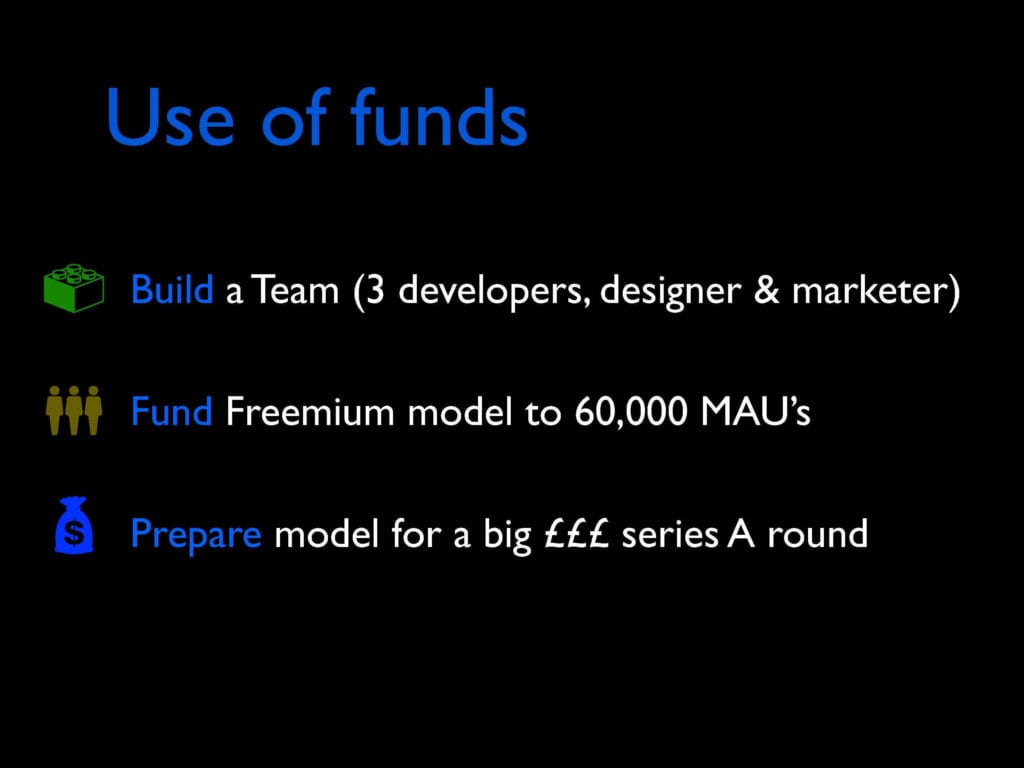 This is not the best deck in the world. Don’t take this as your path to raise $250m or whatever the last round was. What they use to raise the big money is ‘hopefully’ a lot better.