This is the TransferWise pitch deck used to raise a $1.3M seed round from IA ventures and Index Ventures.

In total, they have raised $396.4m the latest being a monster growth round series-E from IVP. They’re one of the biggest success stories to come out of Europe. 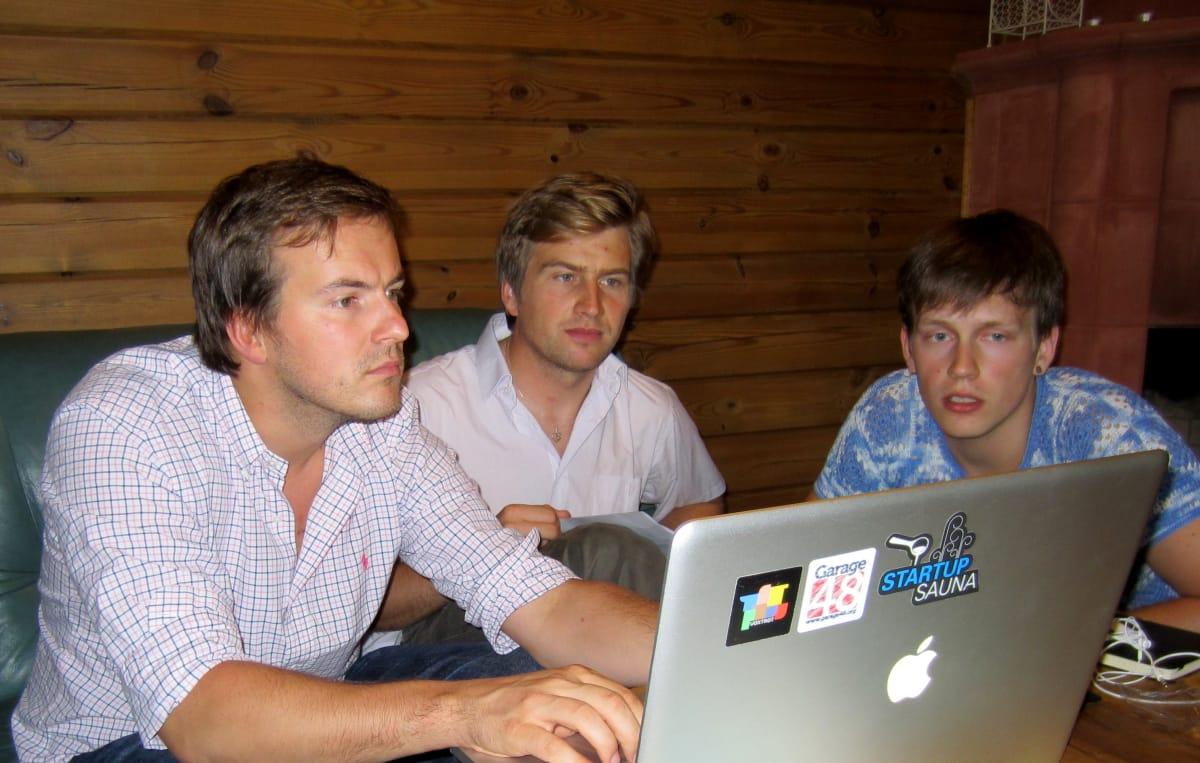 And the first email with TechCrunch writer Steve O’Hear (because we all find that shizzle interesting). 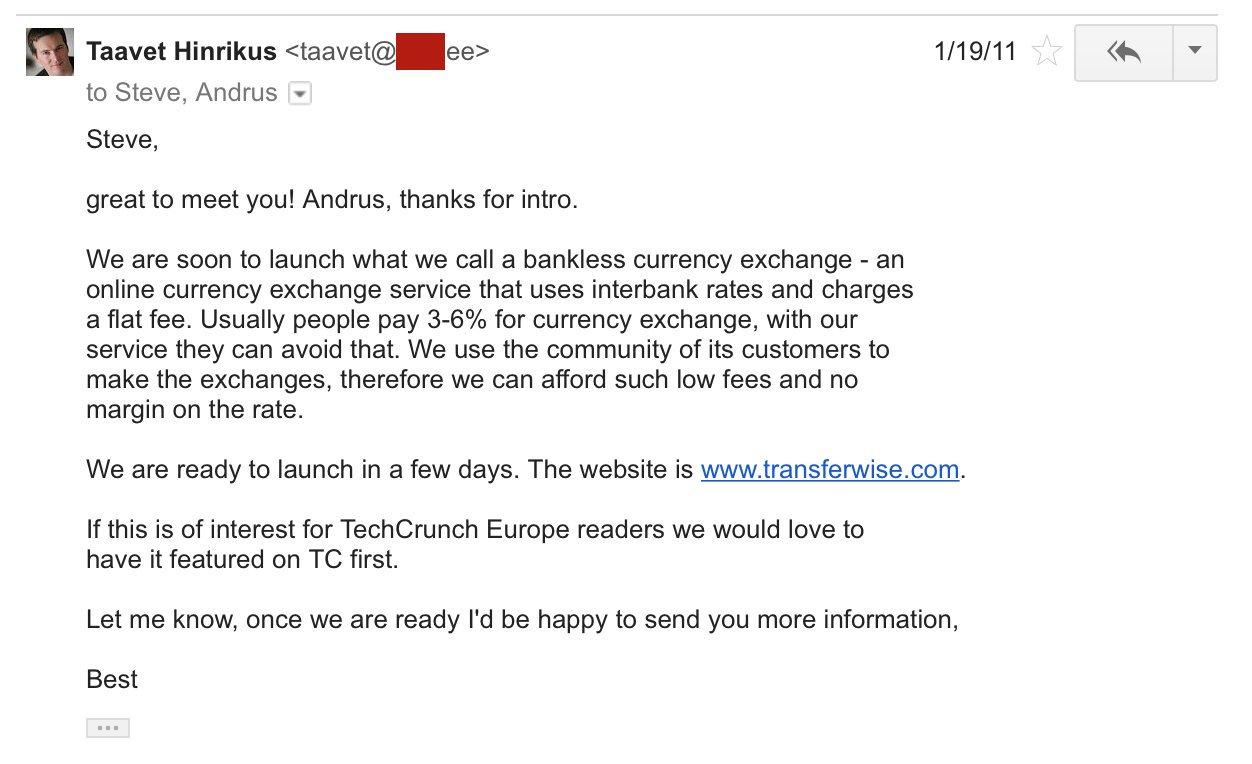 TransferWise was founded in London in March 2010 by Taavet Hinrikus and Kristo Kaarmann. Taavet was part of the small team that started Skype in 2003 and has recently worked with a number of startups as an angel investor and advisor. Kristo had a financial services background from Deloitte and PricewaterhouseCoopers.

The deck is 9 pages. That’s it. There’s a weird rendering error which seems to remove ‘i’s and all. They get straight to the point and there is no funny business whatsoever. It’s clear they have a thesis and they’re figuring it out as they go. Their confidence is that there is a problem worth solving.

Steve O’Hear, one of my fav authors on TechCrunch made the deck public and added some interesting commentary. I’m going to rip that off from him for you.

TransferWise’s original pitch was that it offered cheap international money transfer via what it called “peer-to-peer” currency exchange, a claim that was certainly partially true but for years went largely unchecked.

In fact, coupled with Hinrikus’ previous early role at Skype, this led to the startup being cleverly marketed as the “Skype for currency exchange,” a line that I (rather embarrassingly) swallowed whole.

Not much of this first slide has survived, however: you’ll be hard pressed to find the peer-to-peer description in TransferWise’s marketing today and its orange and red logo is sadly long gone. 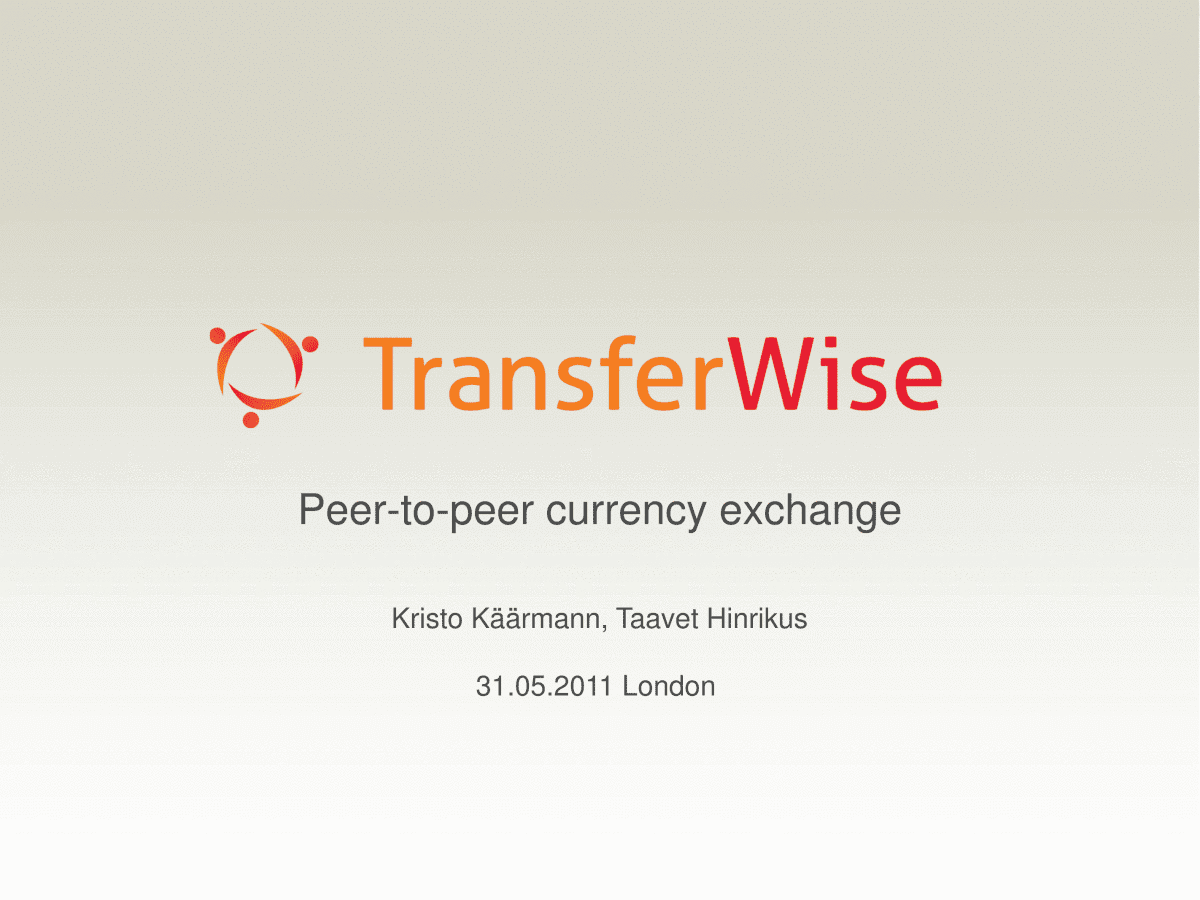 Every good pitch deck needs the set up. What is the status quo and how do you hope to disrupt it?

In 2011, most people transferred money abroad in two ways: either via money exchange services such as Western Union or via their bank. It was the latter that TransferWise had its targets set, highlighting the hidden margin in a bank’s own high exchange rate, in addition to a fee.

“You exchange with peers at mid-market rate,” reads the TransferWise pitch deck. In return, it would charge a simple flat rate fee of £1. That, Hinrikus told me, served as a “good and simple message” and worked while the startup capped transfers at £2,000. However, the pricing was a little naive, he admits, and has since been replaced by a low percentage fee, depending on currency. 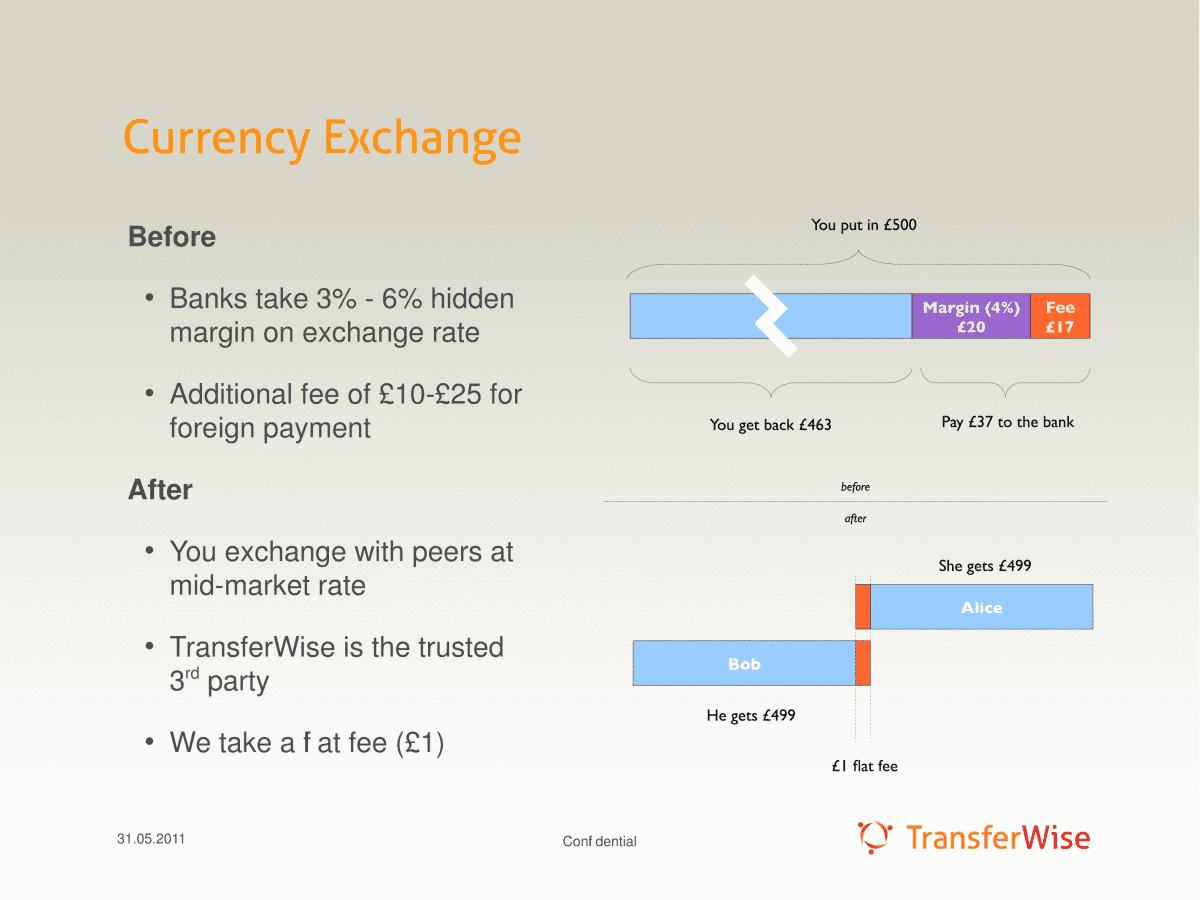 Slide 3 How does it work?

In one sense, this is exactly how TransferWise works today, with a few huge caveats:

Hinrikus says the early product was a very rough MVP, even by the standards of the day, and in retrospect is kind of embarrassing, conjuring up that well-cited Reid Hoffman quote.

He also told me that none of the processes were automated back then. Instead, every evening co-founder Kristo Kaarmann would record each pending transfer in a spreadsheet and move the funds manually.

“Yes we started off all manual and that is the right way to test if stuff works, obviously once you hit volumes you’ve got to be quick in automating,” says Hinrikus. 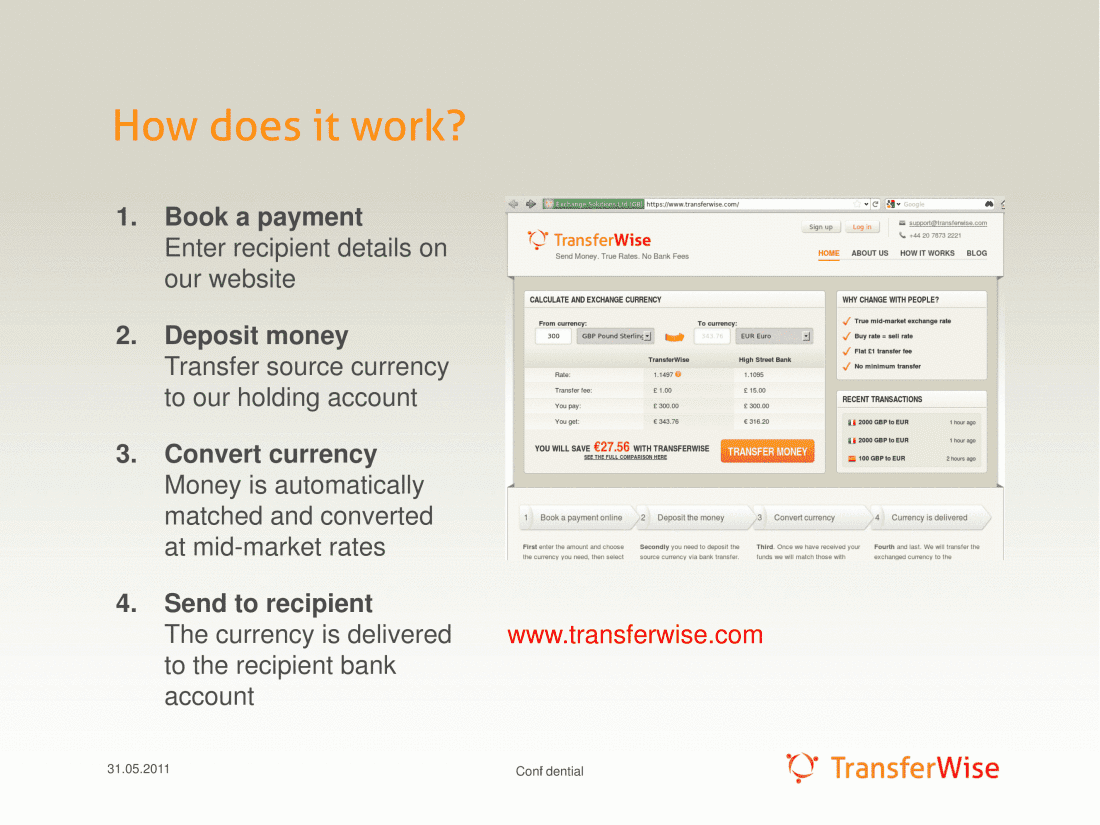 This slide on traction should have spoken for itself, but this was 2011 and seed money in Europe was still in relative short supply, at least by today’s standards.

Notably,  just a few months after launch over £1 million had been sent through TransferWise, with 70 percent repeat customers. That is dwarfed by the over £1.5 billion per month transferred today. 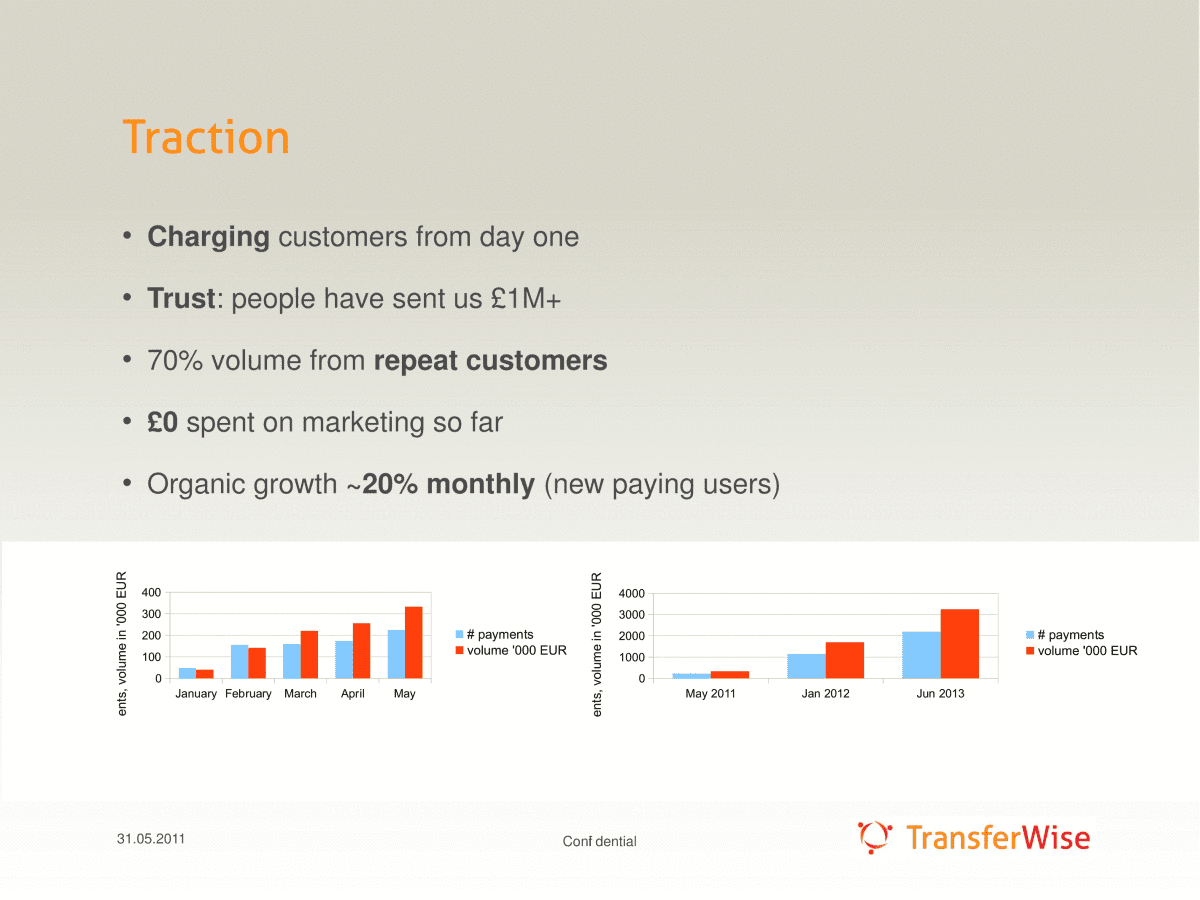 As well as just two currencies supported (in contrast to 45 currencies today), money could only be sent to TransferWise via bank transfer. Card payments were still on the to-do list (note: Stripe wasn’t even founded till the following September).

It is also worth noting that even in early 2011, TransferWise had plans for an API. As I recently wrote, it wants to be the platform for moving money around the world and a consumer-facing app was always just the start. 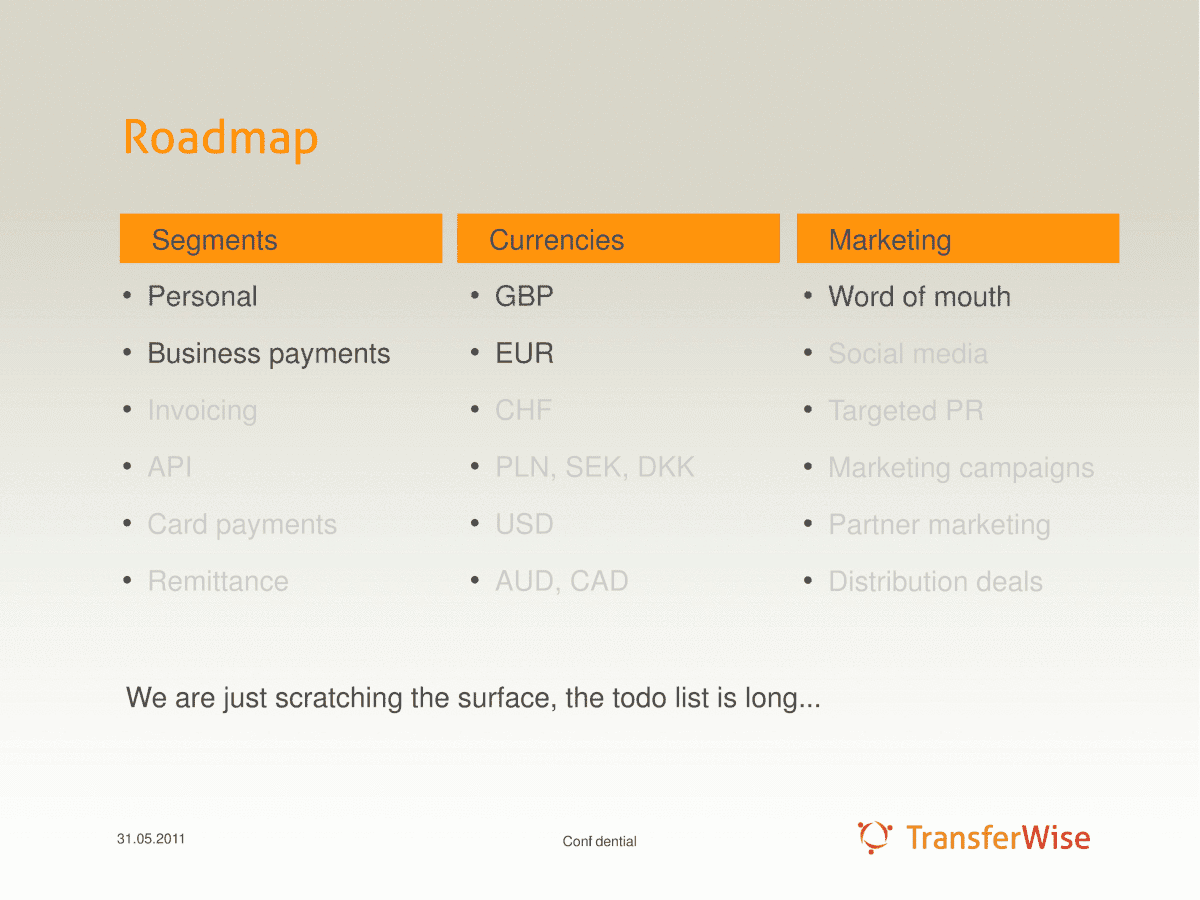 Competition was plenty even back in 2011, while today the space is even more crowded. Money exchange is arguably a commodity service and is a feature of a number of other fintech startups’ products.

However, the incumbent banks still hold a large share of the money exchange market, which remains ripe for the taking. And, arguably, TransferWise has built one of the best brands in the business. 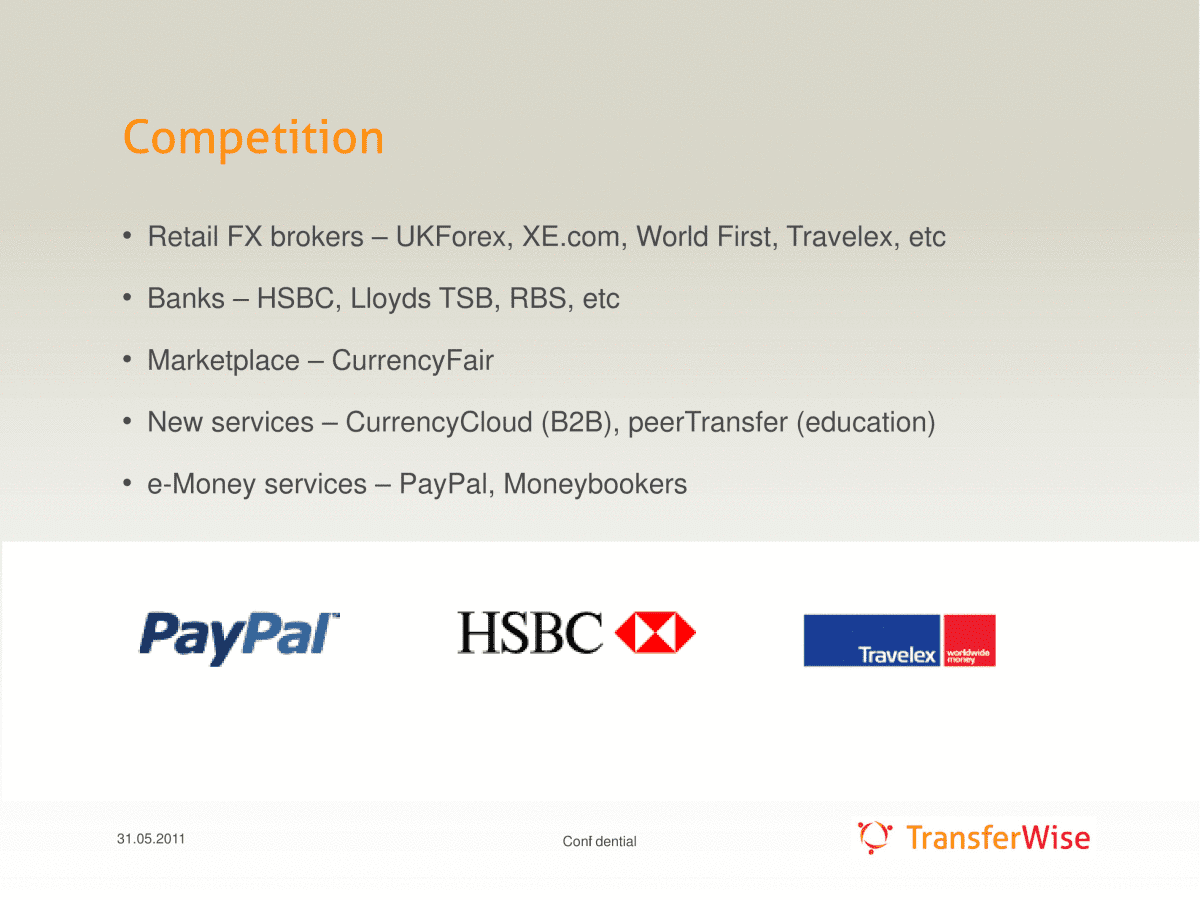 At the time of TransferWise’s seed fundraising, the team was just six people! Today over 800 people work at TransferWise, although it is hard to fathom what they all do. 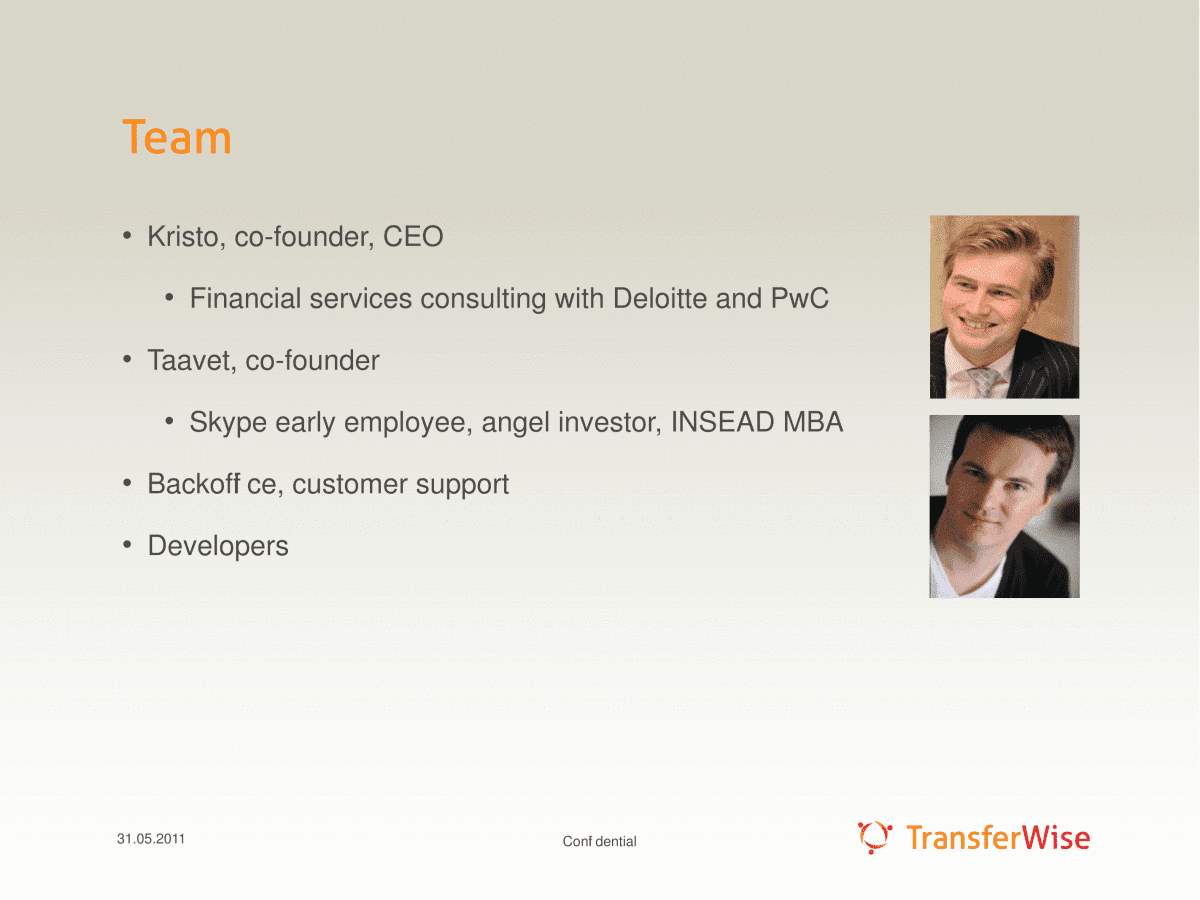 TransferWise was targeting seed funding of around $1 million based on the exchange rate of the day, an amount Hinrikus says was on the high side and possibly contributed to the difficulty he and Kaarmann had closing.

Up until that point, the startup had been funded by about £25k of the pair’s own cash, and small pre-seed funding from Seedcamp, who were bullish on the burgeoning company.

That would pay off greatly for Seedcamp this year, after the sale of its stake in TransferWise helped contribute to a 4.1x return for Seedcamp’s 2010 fund II. 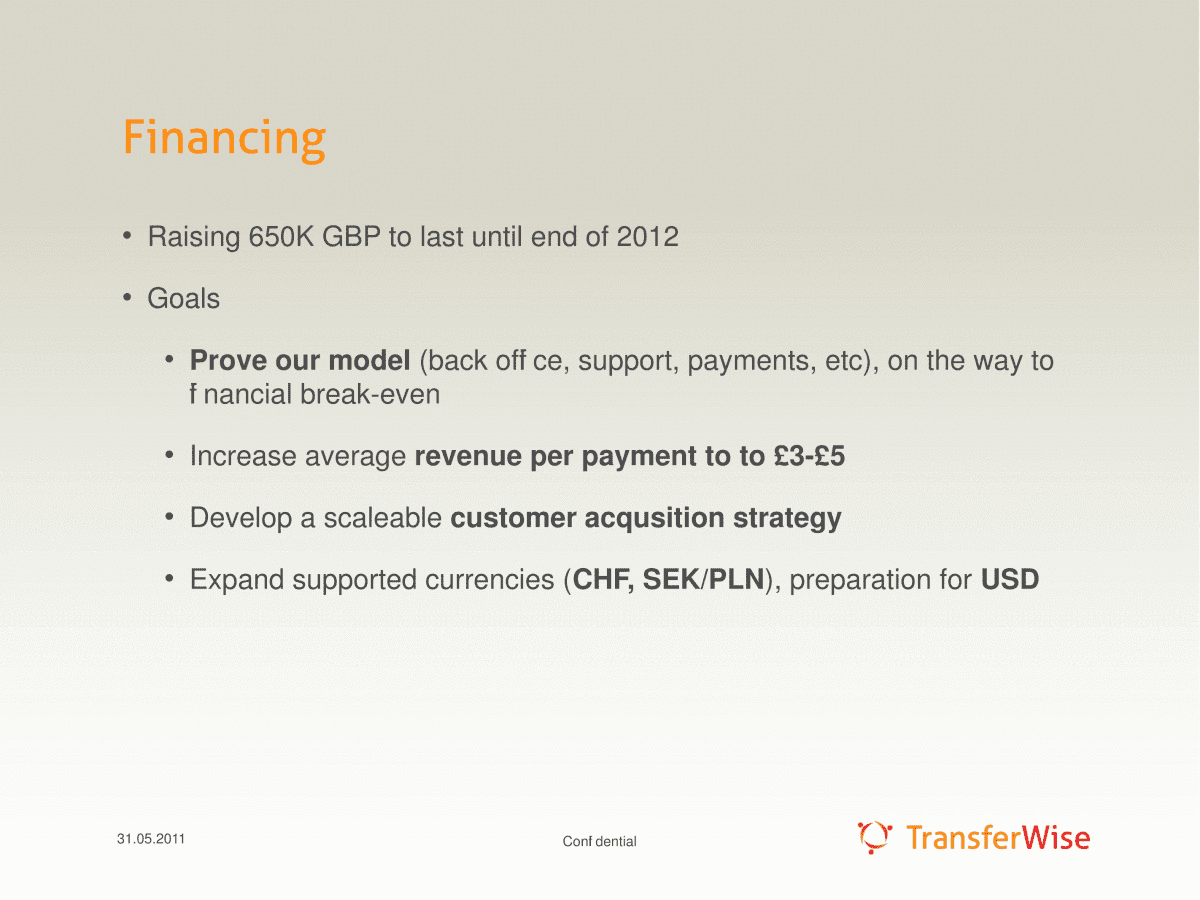 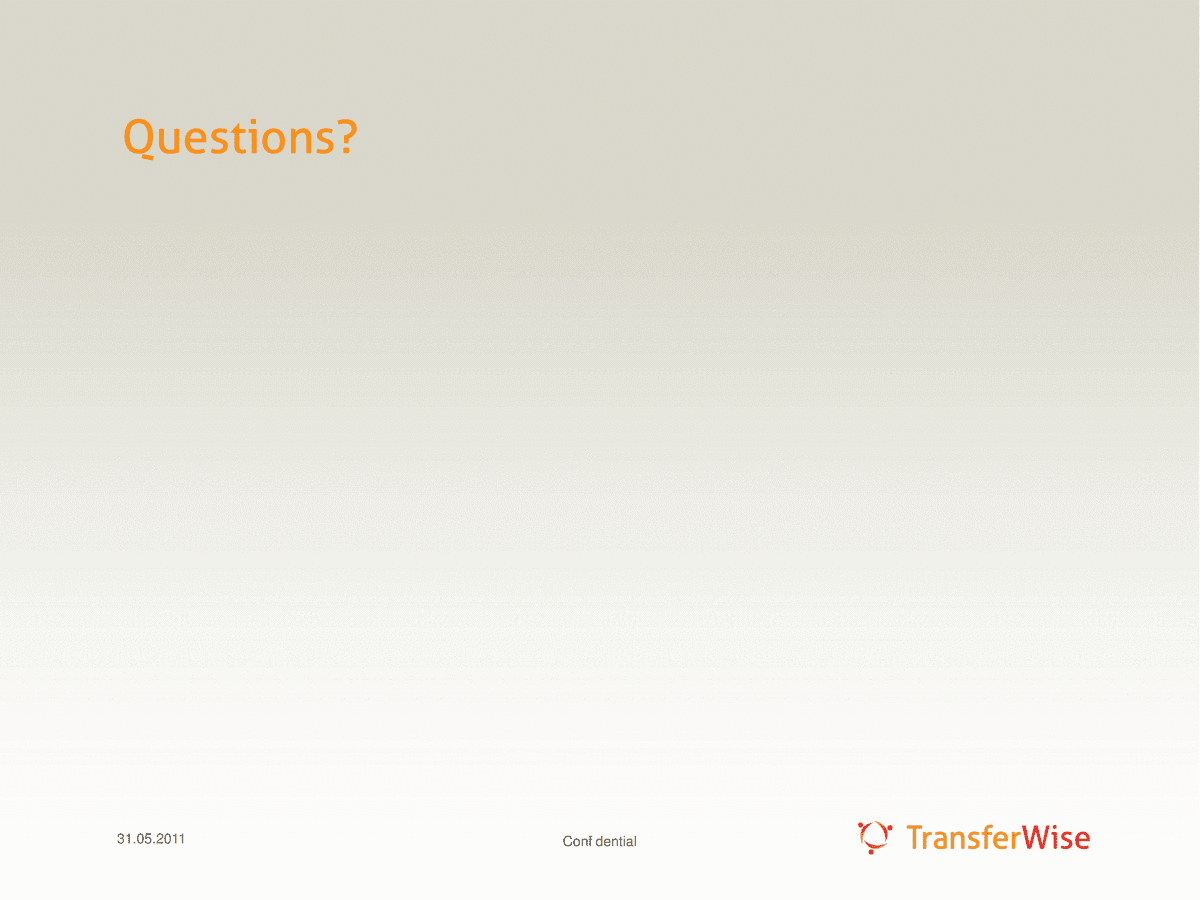