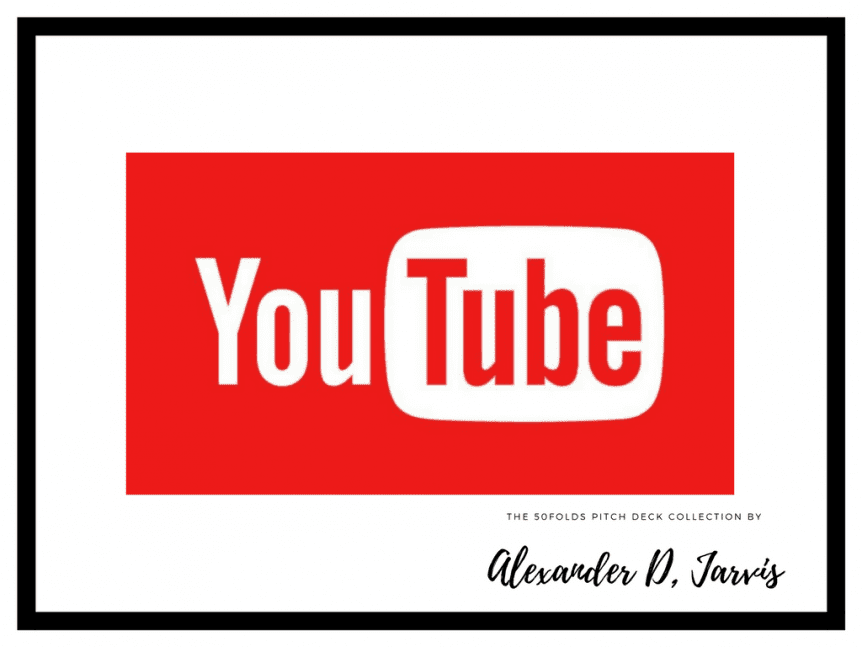 This is Youtube pitch deck to Sequoia which was released in a legal proceeding. It is pretty basic with only 10 slides. In it, I have also included 3 stats slides that were not in the original deck.

YouTube offers a variety of features, including playback, uploading, quality and codecs, and 3D video viewing. It also offers users the ability to view its videos on web pages outside their website. The videos on the site are playable on both iOS and Android platforms. Unregistered users can watch videos, while registered users can upload an unlimited number of videos. Videos considered to contain potentially offensive content are available only to registered users affirming themselves to be at least 18 years old.

Most of the content on YouTube has not been uploaded by individuals, but by media corporations including CBS, BBC, Vevo, Hulu, Haber and other organizations that offer some of their material as part of the YouTube partnership program. Partners from major movie studios, record labels, web original creators, viral stars, and millions more all have channels on YouTube. YouTube is predominantly an ad-supported platform, but also offers rental options for a growing number of movie titles.

YouTube is currently based in San Bruno, California, and is available in 76 languages.

In November 2006, YouTube was acquired by Google and now operates as a Google subsidiary.

YouTube raised $11.5M in 2 Rounds from 2 Investors before exiting.

Viacom took Google to court in 2010. This is great for us as a lot of information came out of it. This deck came from a deposition from Roelof Botha of Sequoia.

You can see the memo from where this deck came from here.

A very interesting deposition came from Google CEO, Eric Schmidt where he was questioned about overpaying for Youtube.

The following is an edited excerpt of Schmidt’s deposition:

Stuart Jay Baskin, a Viacom attorney: And what was management’s valuation?

Schmidt: Much lower than we paid for it.

Baskin: And how was that communicated to the board?

Schmidt: I told them.

Baskin: So why don’t you tell us what you remember telling the board in connection with the valuation?

Schmidt: I believe YouTube was worth somewhere around $600 million to $700 million.

Baskin: And you communicated that to the board?

Baskin: What methodology did you use to come up with that number?

Baskin: Was it based on cash flow analysis? Comparable companies? What were you using as the basis for your judgment?

Schmidt: It’s just my judgment. I’ve been doing this a long time.

Baskin: So you orally communicated to your board during the course of the board meeting that you thought a more correct valuation for YouTube was $600 million to $700 million; is that what you said, sir?

Mancini objects to characterization of the testimony.

Schmidt: Again, to help you along, I believe that they were worth $600 million to $700 million.

Baskin: And am I correct that you were asking your board to approve an acquisition price of $1.65 billion; correct?

Baskin: I’m not very good at math, but I think that would be $1 billion or so more than you thought the company was, in fact, worth.

Schmidt: That is correct.

Baskin: Can you tell us what reasoning you explained?

Schmidt: Sure, this is a company with very little revenue, growing quickly with user adoption, growing much faster than Google Video, which was the product that Google had. And they had indicated to us that they would be sold, and we believed that there would be a competing offer–because of who Google was–paying much more than they were worth. In the deal dynamics, the price, remember, is not set by my judgment or by financial model or discounted cash flow. It’s set by what people are willing to pay. And we ultimately concluded that $1.65 billion included a premium for moving quickly and making sure that we could participate in the user success in YouTube.

The cover is fine. If I wanted to be pedantic, it’s unlikely that the internet was fast enough for anyone to broadcast themselves back then but ok. They were winging it and didn’t have a plan. 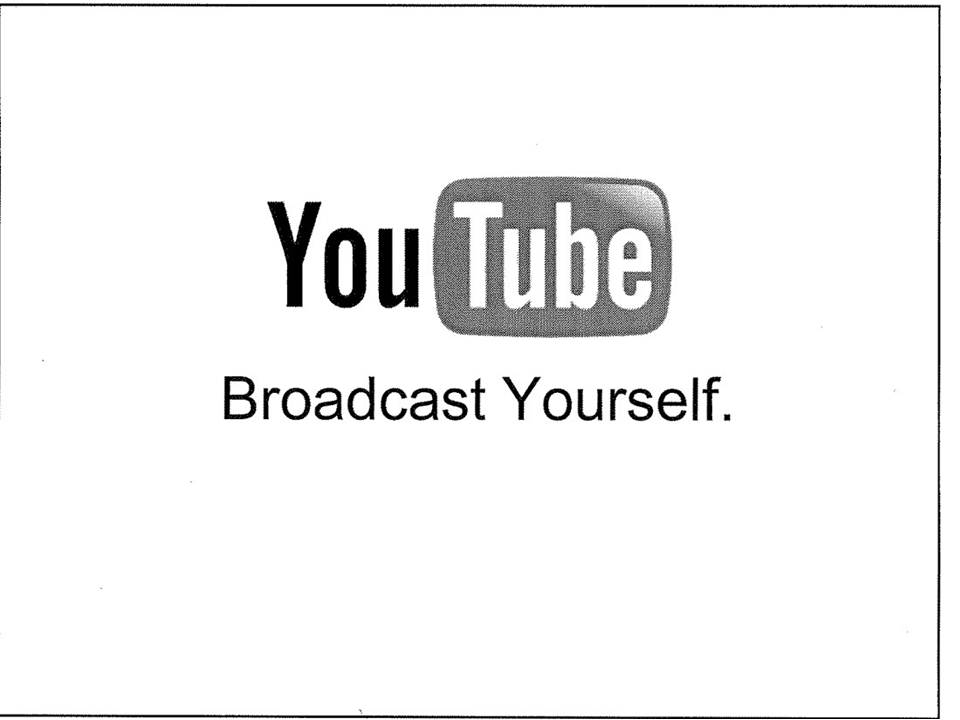 I generally hate vision-type slides as they’re almost always some corporate BS speak that says little to nothing at all.

In YouTube’s case, their company purpose is quite instructive as what they were working on was just barely possible (which is a great logic when it comes to ‘timing’). The notion of user generated content was rather novel- you only need to see the first youtube video uploaded which was entitled “Me at the zoo” filmed in San Diego.

I would generally not even bother writing a vision/purpose slide and instead write a company description. You can use the second sentence to explain where you are going if you care to. 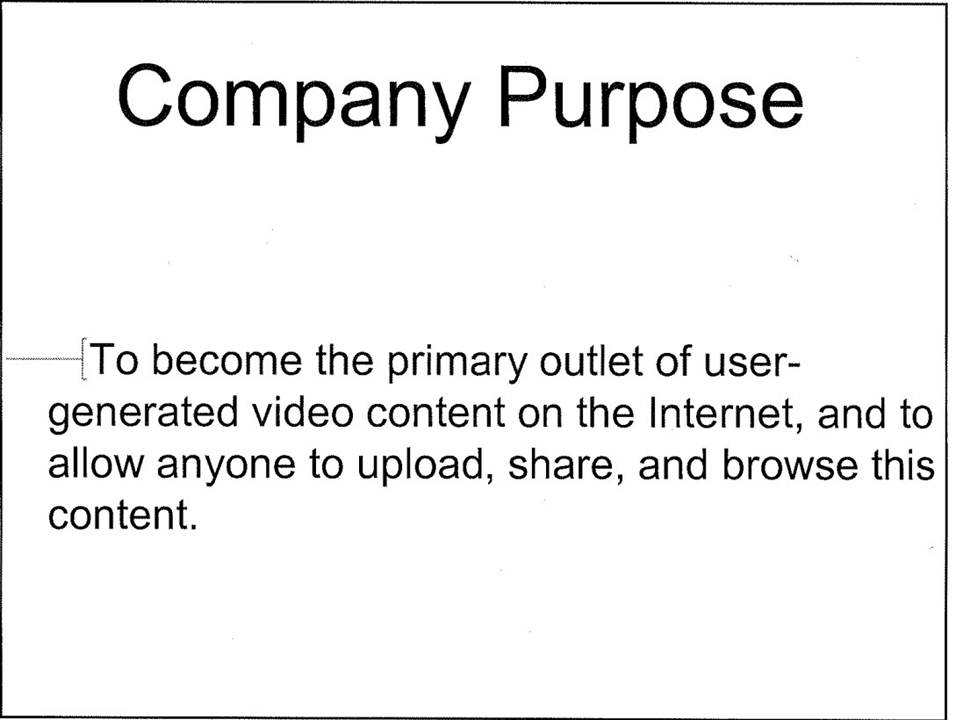 The YouTube deck is fairly crap and ugly, but the content at least gets to the point.

The slide could easily be structured into two boxes of file formats and size issues, which could make the slide a little more interesting to look at rather than 4 bullet points.

The problems are very technical-focused and speak nothing to the needs of the users. Why is it that people want to generate content and share it online? Did they identify a new behavior?

It’s not taught but I highly recommend starting your deck with an industry section that explains what is happening before you get into the problems. In this section, you can allude to both timing and competition to varying degrees, all of which serve to put the problems into context. 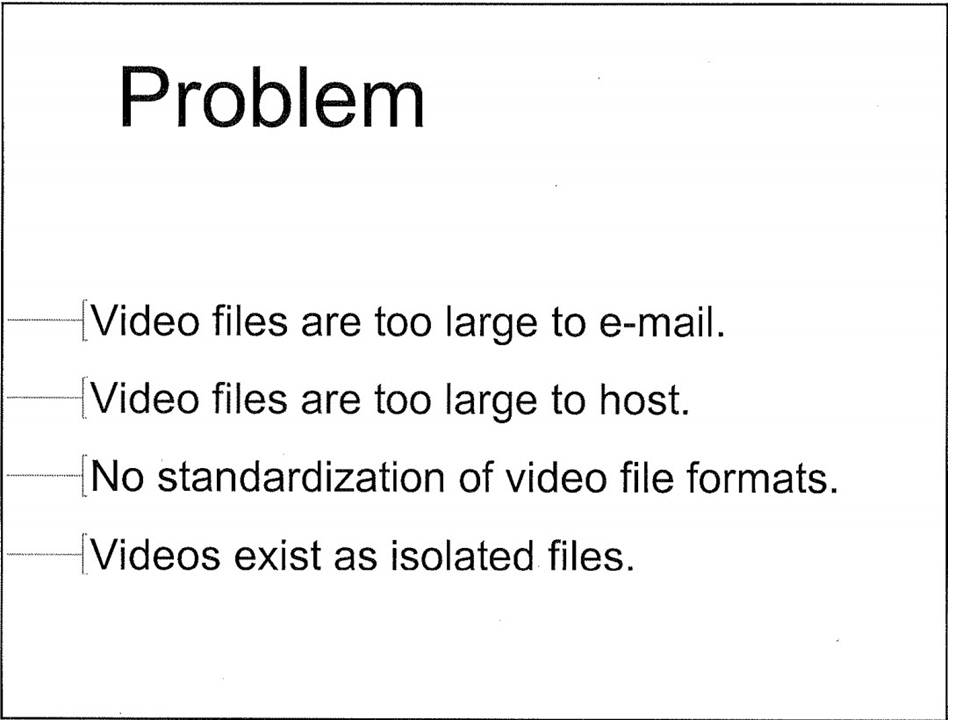 They call the slide solution, but I call this type of slide product since you’re just explaining how it works.

In 2005 you actually had PowerPoint so there isn’t really an excuse for the deck being so spartan. They surely could have added some images of the product and explained how it worked in steps. What were the user behaviors they had identified in how people used the platform?

The whole Flash Video question was a thing back then. I would have made a slide that specifically talked about their tech choices. I remember reading Roelof Botha specifically was looking for a video platform that had figured out how to use Flash.

On a small aside, it might have been interesting to have a slide on the communities that were evolving on YouTube to show who was using the platform and why. For a long time, the internet was seen as a trivial toy, so it was hard for some people to get their heads around this being a thing.

The first thing that you will notice on their market sizing slide is that there isn’t one number on it. That’s totally ridiculous and you can’t get away with that!

This slide should rather be characterized as a timing slide. These are actually two good rationales for ‘why now’- though they come without any data backing the points up (which is always my very strong preference!).

What they are effectively saying is that ‘we have zero clue how large the market is, but things seem like they are moving, so sure shucks, let’s have a crack and see what happens!’

They weren’t exactly raising a huge amount of money – it was a seed round – so they got away with it. If they were looking for a large chunk of change this wouldn’t have flown. 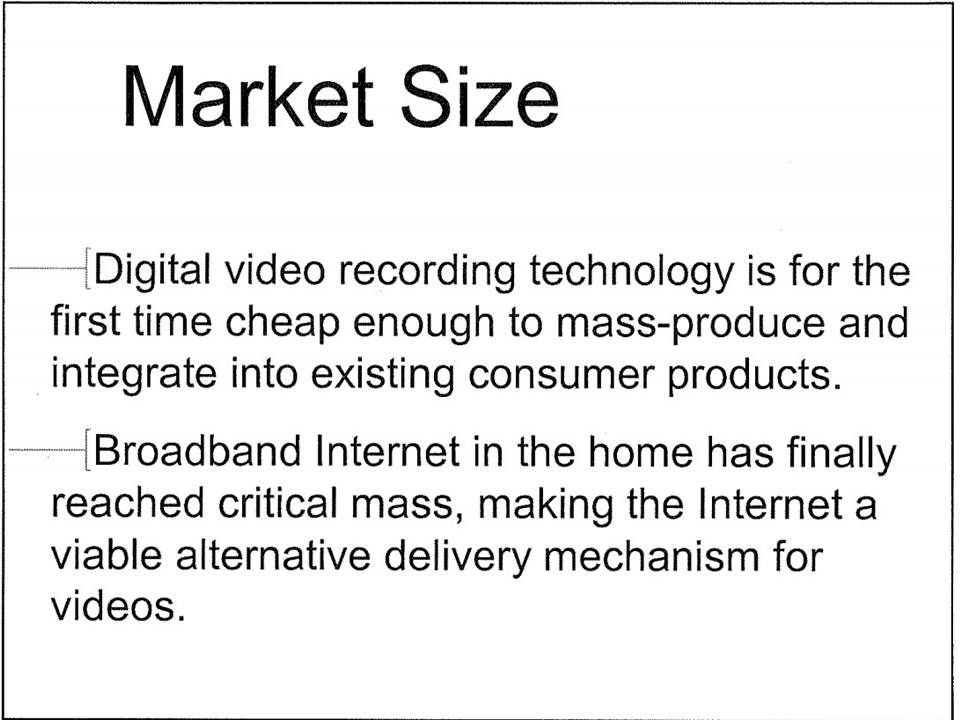 Hardly any work was put into this deck. It is just a list of some names. YouTube could easily have added commentary to the difficulties the competition was having. I remember reading some articles a very long time ago about the difficulties Google was having just as an example- who ultimately purchased them in order to catch up. 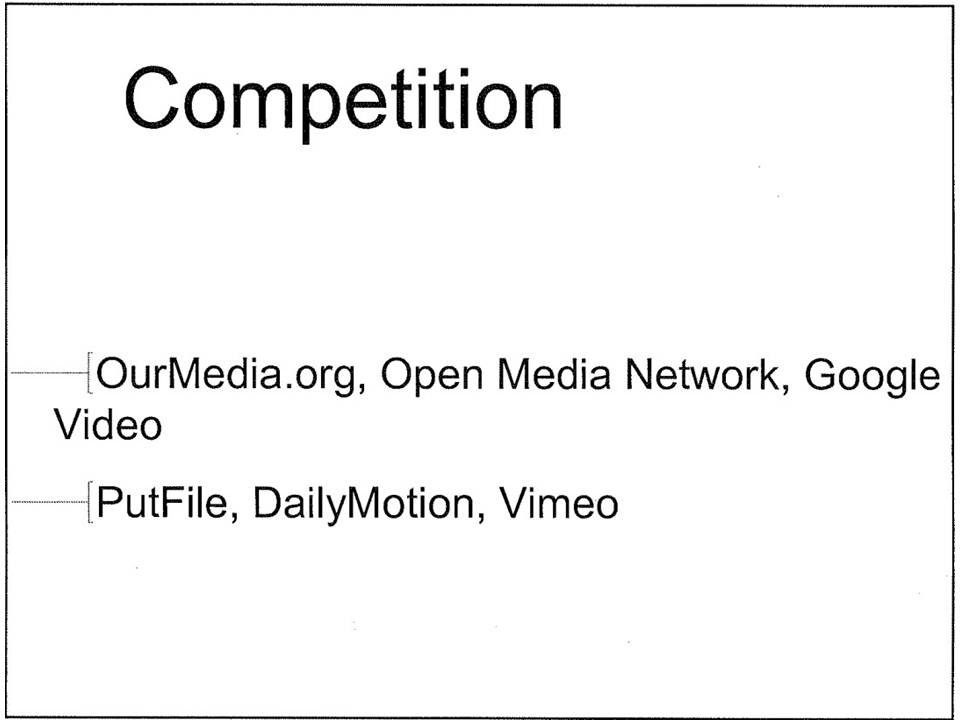 This is a pretty terrible slide. Unless the founder was talking to the slide and explaining what each point meant, no one would find this slide valuable to read alone.

You absolutely should not look at this deck for learnings on how to do a deck. It’s just fun to look at since YouTube is such a large company now under Google.

When startups do choose to make a slide like this (not that common) it’s typically a roadmap slide, with perhaps a table or a Gantt chart on it. 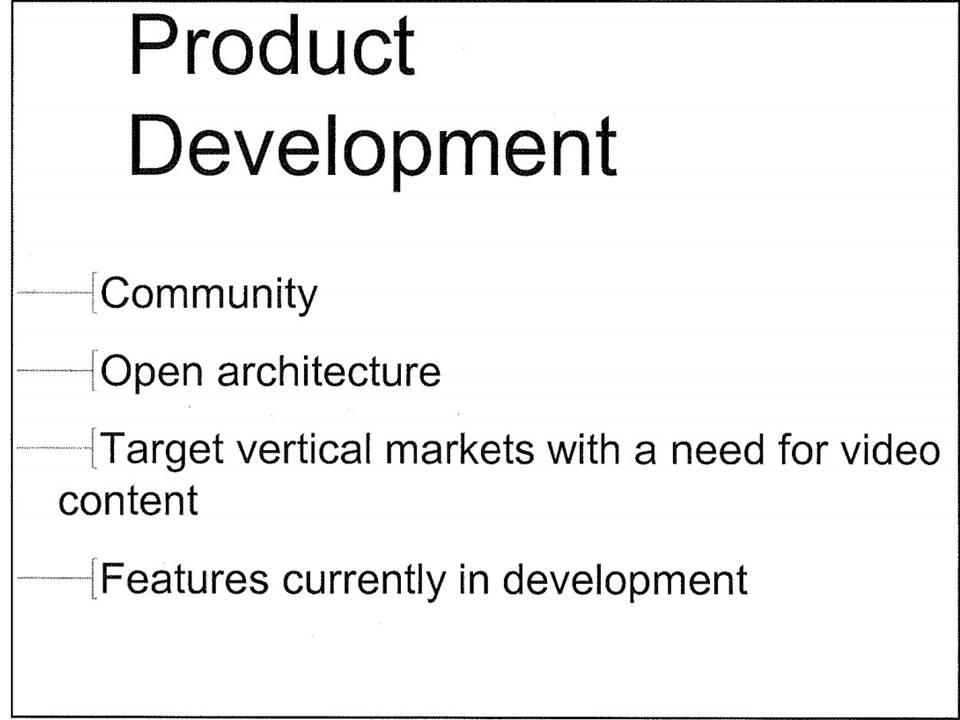 In modern parlance, this is their revenue slide. I think?

In short, the founders had zero clue how they were going to make money. This was only a few years after the dot com bust where companies were doing an IPO with no idea how to make money, so am sure expectations didn’t meet those of todays’ investors! 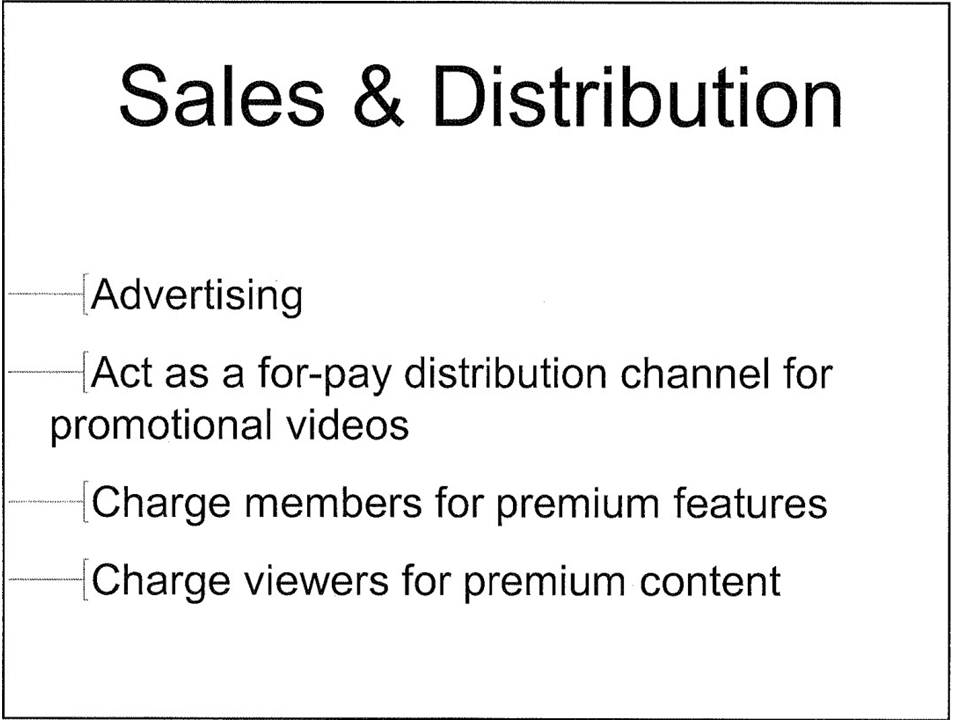 The wording for the team is infantile, but the short version is that everyone worked at PayPal and at that time Max Levchin would have just become a recognizable name in the Valley.

Jawad never stayed with YouTube full time as he went to Stanford. He still got $64m in stock when Google acquired YouTube. 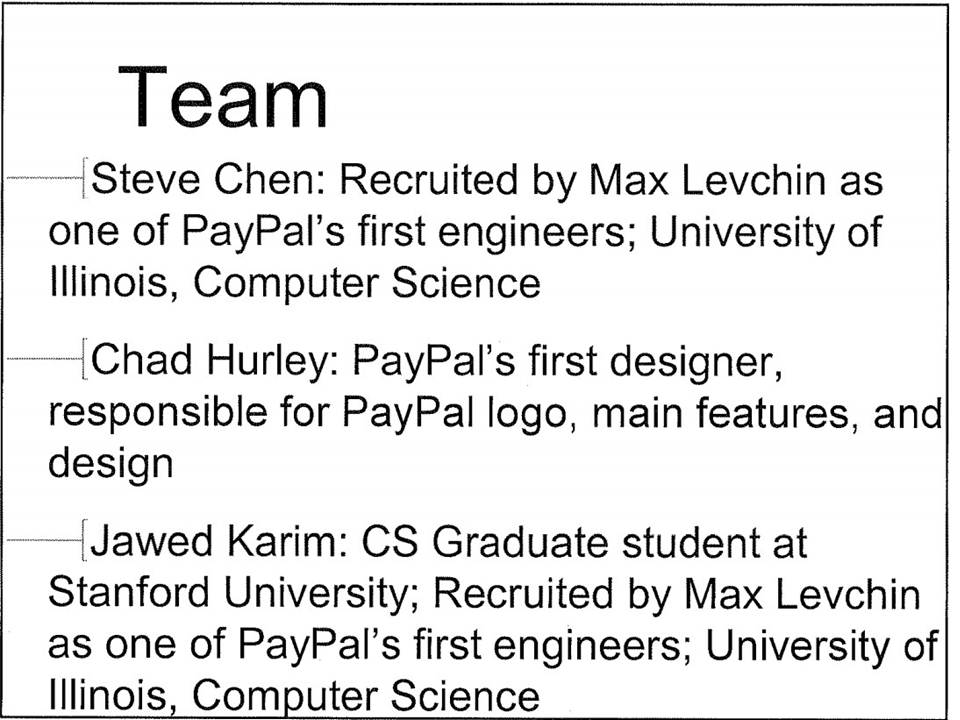 This is obviously a crappy slide, but hell, if you are number one does anyone really care? 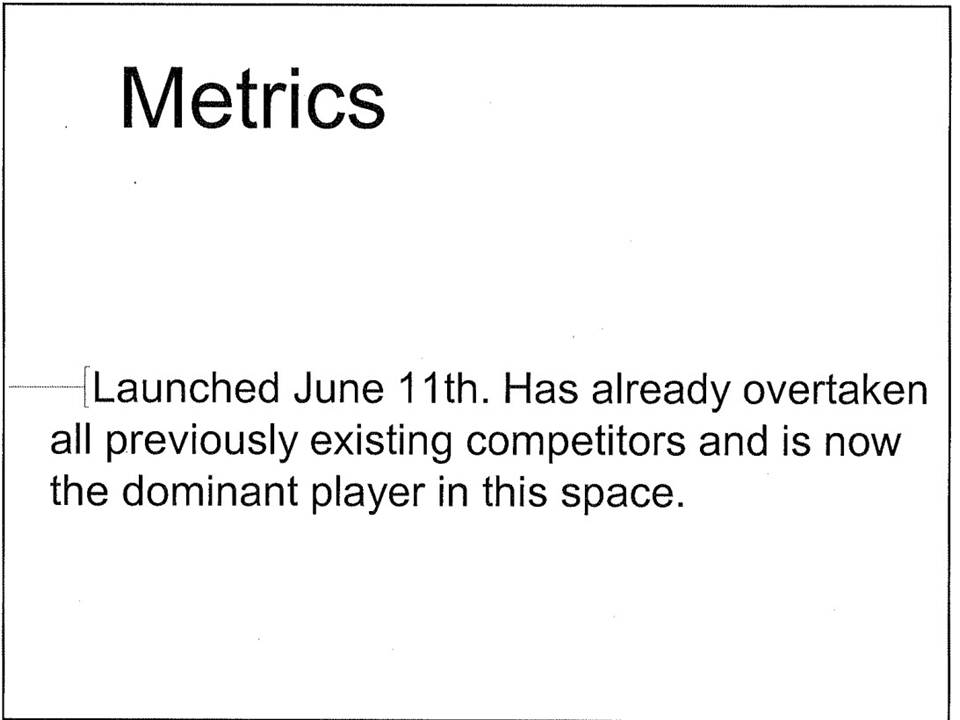 Ok, so that was their deck so far as Roelof shared it. He did however have some additional slides which he shared in the legal filing, so I stripped them out and stuck them in. 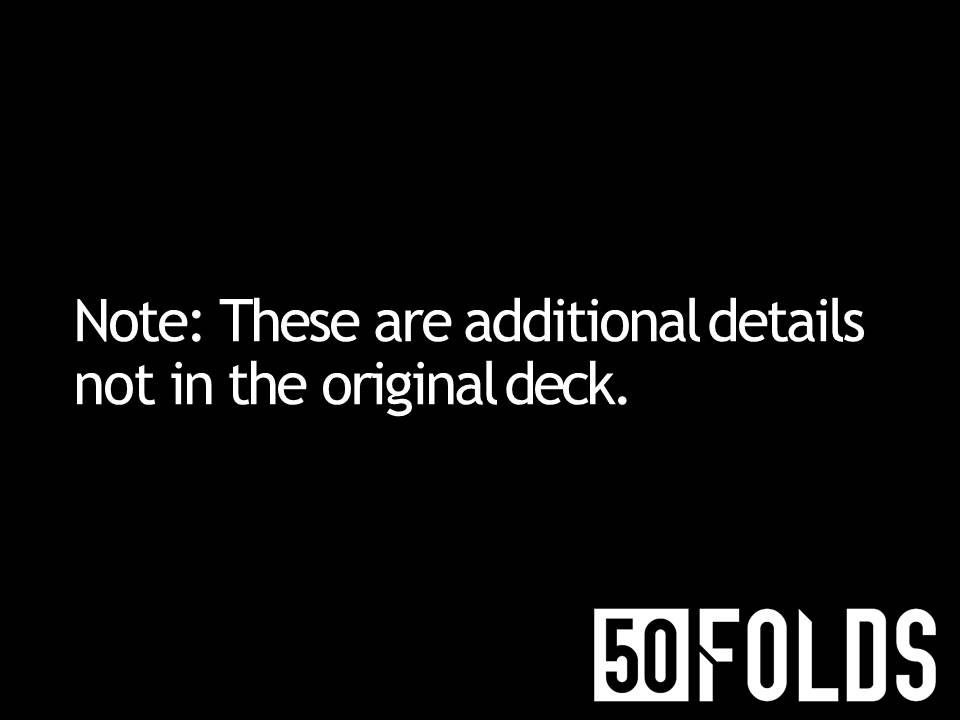 Their stats are going all over the place. One thing that you should try doing with charts is to play with adding trend lines to the graph. You could add a simple normal trend line and it would generally point up. The exponential trend line might look better though. Point being, consider if there are ways to add some insight when you share things. 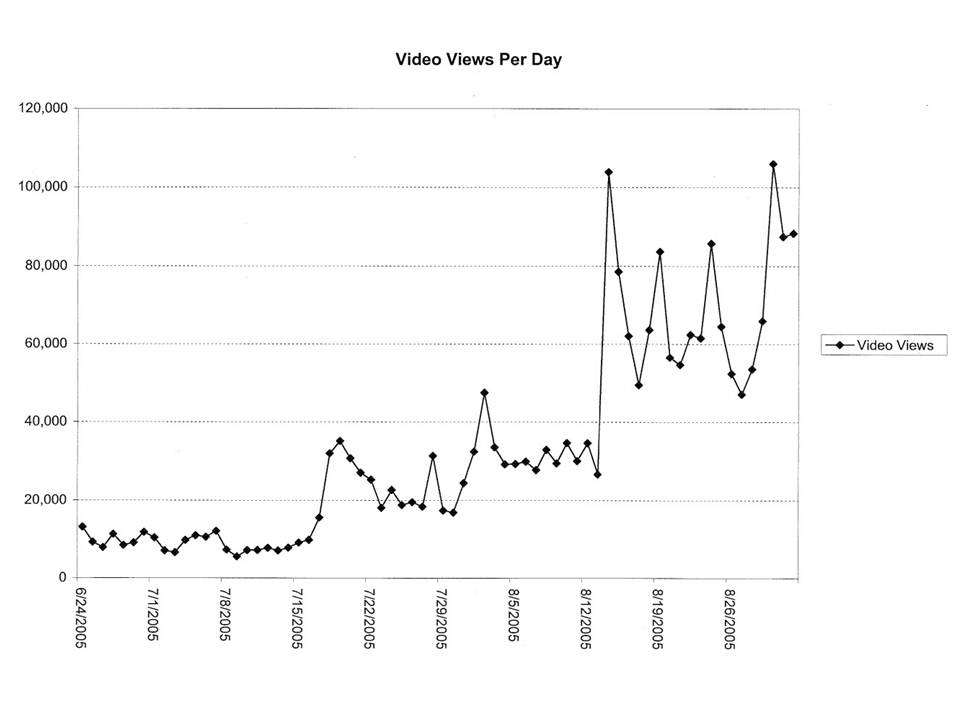 This is a very clean line. Almost too clean. It’s only the inflection point that makes it believable. 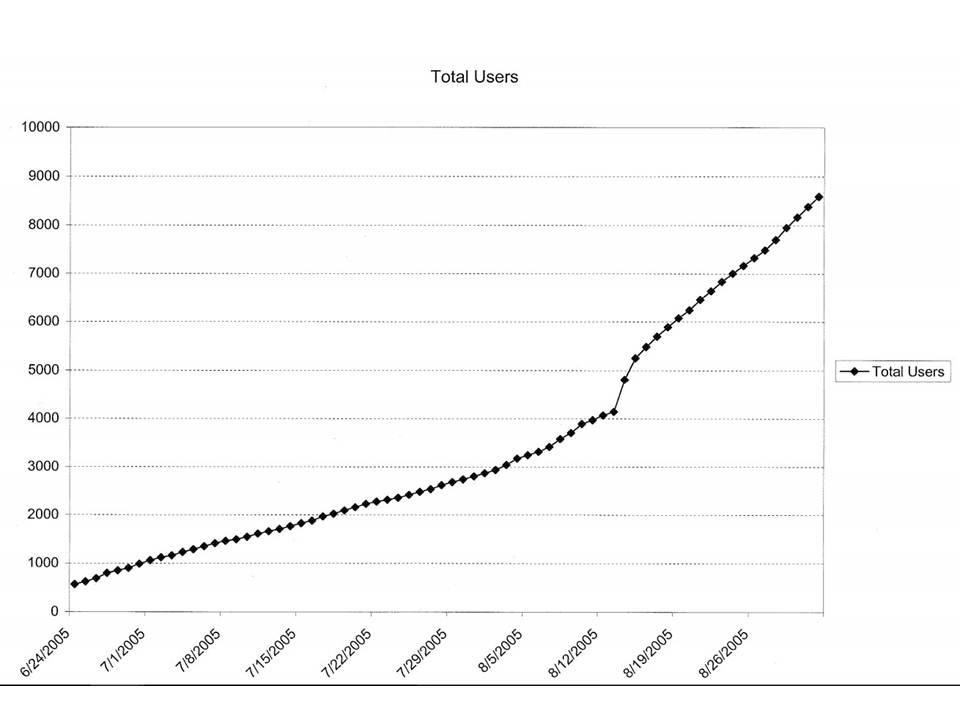 There seems to be a high r2 to the videos uploaded to total users. If YouTube had more traction to share I would have combined these two charts together. Top-level metrics aren’t that interesting other than the earliest stages.

Ah, I just noticed that the new videos are cumulative. I generally don’t like to see that, but at least they make that clear in the header.

It might have been interesting to see some ratios such as submissions per user, but you need to play with those things to see if they illustrate a point that you make. These slides are just a dump of data, presumably at the request of Roelof.

If you were making these slides as a founder you would want to do more work to explain what was going on. For example, where did that little inflection point come from? 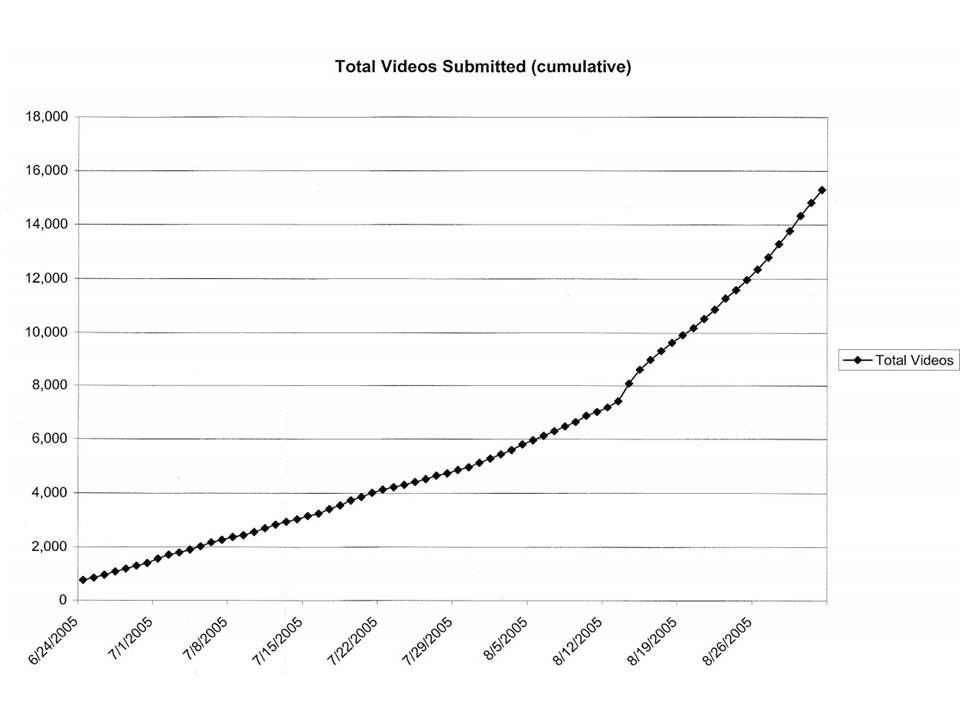 Well, that is that. The deck is pretty crap, but it is interesting to see for shizzles and giggles. I don’t recommend using it to make your own deck though.