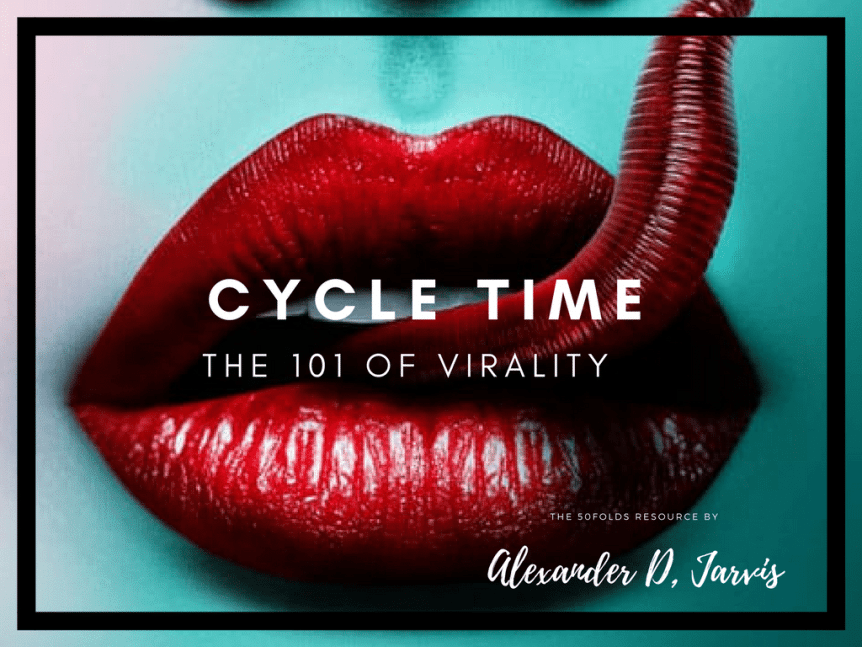 TL;DR: This blog covers the role of the viral cycle time (CT) in viral growth of your startup.

What happens when someone really loves your product and/or the mechanics of a product compel them to share and interact with their social network? They share more, right? This blog is about how long it takes them to share since if they share faster, which would be cool right? Faster is always better (sort of)?

Virality is about loops. You get a user, they like, they reach out to their friends who then like and share again. That’s a loop. So the cycle time is just how long it takes for a loop to happen.

Viral cycle time: The time it takes for a referral to turn into a customer

The time to share is a function of the time it takes a user to:

We will get into this in more detail in a blog I will write soon so if you want to learn more, wait for it! What we’re talking about is why the time to share can matter… a lot.

You can get the viral model here
>

Why does viral cycle time matter?

You know what K-factor is. If you don’t head here, read this first.. The K-factor just means how much is shared, the magnitude of your growth potential. It doesn’t explain the amplification.

So we are playing the latest hot game called zombie kill. Your goal is to kill as many humans as possible. You’ve blown some coins on paid upgrades so your K is high (You bite people fast and they become zombies). But if you are strategizing how to get on the leaderboard, you need to figure out something smart.

What if each person you bit got up and started biting people for you? That would multiply your score!

It would be a multi-player game. Only the number of team members you recruited would keep increasing! That would be cool right? Every time you bit humans they would start scoring points for you, and the people they bit would also recruit for you!

Yeah, this is basically a scam like Herbalife! A bull shit pyramid scheme (Sorry, allegedly).

But what if I said your virus was still weak (you need to buy more upgrades)? Zombie kill is only a one minute game and it takes 5 hours for a human to become a zombie. That’s totally pointless. You have one minute to win. So the time from infection, to the human become a zombie, realising they like meat, want to eat people and start doing it needs to be a lot less, right?

How do you get a low viral cycle time?

Other than in ‘adult time‘, friction of any kind is normally bad. Friction in onboarding and sharing at a startup is never, ever a positive thing.

If you want to have a low CT then you need to do everything you can to reduce friction in sharing. The most important thing to internalise in this series of blogs is that virality is engineered. It DOES NOT just happen. I discern virality from word of mouth, because virality is an engineering and/or product phenomenon, whereas WoM happens as a side effect of loving a product. Sure, I know the difference can seem slim, but there is a big difference.

You earn a low CT through a thousand little improvements. You integrate with all the social networks. You A/B test when the perfect moment is to encourage users to invite their friends. The list is massive.

Let me expound on this tangentially. I was chatting with a buddy of mine at a unicorn we helped build, but he stayed at far longer than I did. I asked him what his key learning was since I bailed. He said there wasn’t one.

The big changes that happened were the outcome of 1,000 little improvements we made that compounded over time

And so it is with virality and decreasing your CT. You either have it right or you don’t. Ha, it’s like a fundraising model. All models are wrong but some are useful!

There is no template answer to decreasing your viral cycle time perfectly. It’s a process.

Who has a short viral cycle time?

Let’s keep this brief to start. Facebook, Snapchat and Linkedin are the exceptions. Their CTs are low… but, they also engineered it and tested everything that might work to make it happen.

The only companies that have a possible chance of going viral are those that are inherently social. Unless you are a social network, you are not going viral (I have a blog to post on this coming soon). If you are SaaS the most you will get is a K of 0.2. Yes, content does go viral.  A buff black dude in the shower who smells amazeballs, little pale babies on roller skates… whatevs. But virality is predominantly ephemeral.

YouTube is a fabo case the where the cycle time was notably short and not a social network, per se. You see a funny cat video and then immediately send the link on to your other sad bastard friends who also like cat videos… The time to gratification it so low. There is no friction. You can embed those videos easily and boom.

David Skok at Matrix has written about cycle time being the most key factor (I disagree since I don’t believe in virality outside of being a curiosity you can’t plan for). He shared a great example of YouTube vs a company he invested in called Tabblo years ago:

Tabblo, on the other hand, had a much longer cycle time. A customer would post some photos on the site and invite their friends. The friends might see the photos on Tabblo, and like the experience and decide that they would use the site the next time they took photos they wanted to share. However, that is where the problem came in: it could take months before they next took photos, and decided to share them.

So back to zombie kill. Tabblo is a crappy player. The minute is up before his zombies get up and start killing. Whereas YouTube just got an eSports sponsorship deal because he slain evvverybody.

What is the effect of a low viral cycle time?

I know I have been talking shit about viral cycle time. As an excel nerd its frickin scary what a low cycle time can do in a model. You blow it up posthaste with a low CT. Like, if your K is greater than one (well the true K, adjusting for churn) and you have a low viral cycle time you can literally have everyone with a phone in the world playing zombie kill in a few days. It’s sick. I can’t even.

The CT is enormously powerful… academically. But you’re not in the business of writing academic papers. You want to make money. That’s why I think CT is largely BS in terms of being claimed as being critical.

I think CT is elegant in the destruction it can wage. Read Andrew Chen’s blog on jumping the shark. See the ‘fin.’ That means you acquire users and lose them all due to churn.

Churn as a function of virality is a point I’m going to finally put front and centre. 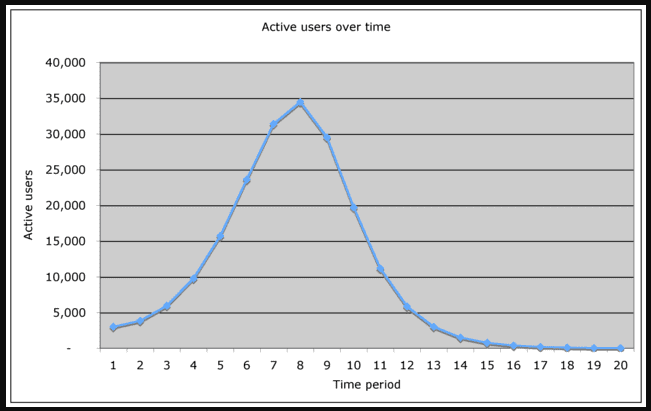 Basically, you accidentally get virality, have crappy retention, you blow up and lose everyone. This is effectively DrawSomething and losing the interest of the world a day after Zynga buys you. 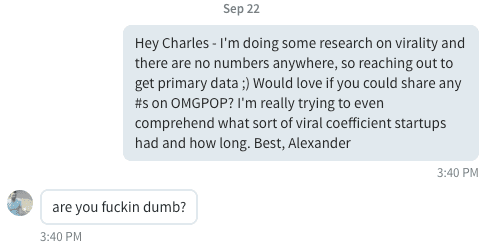 Let’s just say I selectively reached out to 15 founders and haven’t been able to get any primary data. If you are wondering why there isn’t more data… no one will share it.

As usual, I made the most insane model for virality. I did some analysis to figure out what mattered and particularly to call BS on some claims.

A quick look at the table that shows the effect of varying the viral cycle time shows that customer growth is dramatically affected by a shorter cycle time. For example, after 20 days with a cycle time of two days, you will have 20,470 users, but if you halved that cycle time to one day, you would have over 20 million users! It is logical that it would be better to have more cycles occur, but it is less obvious just how much better. A quick look at the formula tells the whole story. The Viral Coefficient K is raised to the power of t/ct, so reducing ct has a far more powerful effect than increasing K.
This explains why YouTube exploded at a faster rate than ever seen before.

When I was a n00b I was like yes sir, whatever you say. But once you really understand all the critical variables and reality you can start calling BS.

Here is a matrix of outcomes of the Viral Invitation Factor (Blog coming soon. I made this shit up.) to the churn rate and cycle time.

You see the #####s? Yeah, I kept them on purpose. That means shit got cray cray. I set the VIF to be one year (360 days) so this shows the total number of invitations that happen in a total series of zombie kill if you played for a year. The numbers are the victims.

Your cycle time is related to time to happiness. If people see value fast, if they get the product, if they get the ‘a ha’ moment, then your time to sharing is decreased. You can optimise your users to share faster, but if they don’t give a toss and churn out why does it matter?

Let me know your thoughts in the comments? I know you want to argue with me.

You can get the viral model here