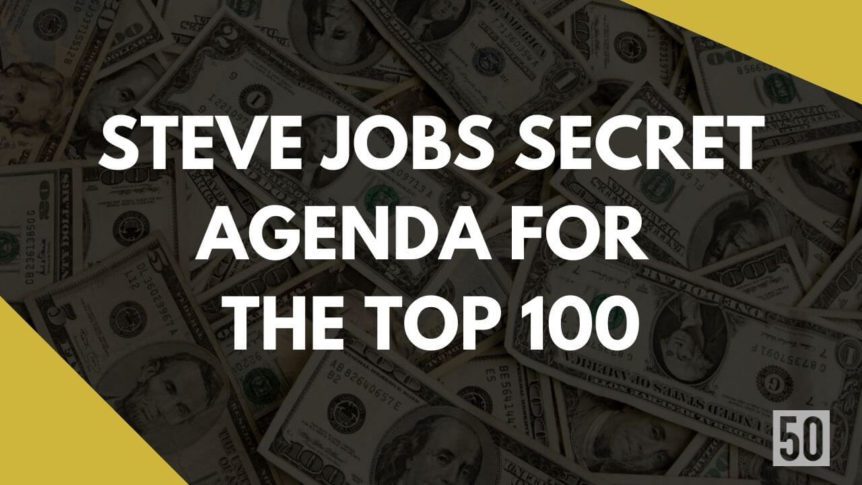 Tl;dr: Steve Jobs’ agenda for a secret Apple meeting which was leaked during a lawsuit with Samsung.

In October 2010, Steve Jobs sent an email to Phil Schiller (a member of the company’s executive team since Steve Jobs returned to Apple in 1997) with the subject line “Top 100 – A.”

It was an itinerary for a top-secret meeting called the Top 100 to be held early the next year, in 2011.

Steve Jobs outlined Apple’s strategy to the company’s 100 most senior (or rather, valued to him) employees. He heralded the “Post PC era,” vowed “Holy War with Google,” promised to “further lock customers into our ecosystem,” and warned that Apple was “in danger of hanging on to old paradigm too long.”

The email is now public due to an on-going lawsuit between Apple and Samsung.

Given how secretive these meetings were and that 2011 was Steve Jobs’ last year at Apple, the email is a fascinating historical document.

In 2011, Fortune’s Adam Lashinsky described what the Top 100 is, and how the meeting works:

There is a small group at Apple that most certainly has met Steve Jobs. It’s called the Top 100, and every year or so Jobs gathers these select few for an intense three-day strategy session at a proverbially secure, undisclosed location. Everything about this Top 100 meeting is shrouded in secrecy, starting with its very existence. Those tapped to attend are encouraged not to put the meeting on their calendars. Discussing their participation is a no-no, even internally. Attendees aren’t allowed to drive themselves to the gathering. Instead they ride buses that depart from Apple’s Cupertino, Calif., headquarters to places like the sumptuous Chaminade Resort & Spa in Santa Cruz, Calif., which satisfies two Jobs requirements: good food and no golf course. Apple goes so far as to have the meeting rooms swept for electronic bugs to stymie snooping competitors.

The Top 100 meeting is an important managerial tool for Jobs. He and his chief lieutenants use it to inform a supremely influential group about where Apple is headed. The elaborately staged event also gives Jobs an opportunity to share his grand vision with Apple’s next generation of leaders. The Top 100 meeting is part strategic offsite, part legacy-building exercise.

Jobs generally kicks things off personally. Each session is as well crafted as the public product debuts for which the CEO is so famous. For presenters the career stakes are high, and the pressure is nerve-racking. “The Top 100 was a horrifying experience for 10 or so people,” recalls one former vice president, who took the stage some years ago. “For the other 90 it’s the best few days of their life.” Jobs sometimes uses the occasion to unveil important initiatives. “I was at a Top 100 when Steve showed us the iPod,” says Mike Janes, who worked at Apple from 1998 to 2003 and remains close to Apple executives. “Apart from a tiny group, no one knew anything about it.”

To be selected for the Top 100 is to be anointed by Jobs, an honor not necessarily based on rank. Jobs referred to the group, but not the conclave, in an interview several years ago with Fortune. “My job is to work with sort of the Top 100 people,” he said. “That doesn’t mean they’re all vice presidents. Some of them are just key individual contributors. So when a good idea comes … part of my job is to move it around [and] … get ideas moving among that group of 100 people.” Privately Jobs has spoken even more strongly about the Top 100’s importance. “If he had to recreate the company, these are the 100 people he’d bring along” is how one former Apple executive describes Jobs’ characterization.

Though its name isn’t to be uttered, the blessed nature of the gathering creates a caste system at Apple. Inclusion is by no means permanent. According to Jobs’ whims, attendees can be bumped from one year to the next, and being kicked out of this exclusive club is humiliating. For those left behind in Cupertino, chattering begins as soon the chosen few have departed. “We’d tongue-and-cheek have a Bottom 100 lunch after we were done preparing the people who’d left,” recalls one nonparticipant. Says another: “We weren’t supposed to know where they were. But we all knew.”

Difference Between the Janitor and the Vice President

I know you are interested in how Apple operates, so I thought I would share this Jobs parable.

The accountability mindset extends down the ranks. At Apple there is never any confusion as to who is responsible for what. Internal Applespeak even has a name for it, the “DRI,” or directly responsible individual. Often the DRI’s name will appear on an agenda for a meeting, so everybody knows who is responsible. “Any effective meeting at Apple will have an action list,” says a former employee. “Next to each action item will be the DRI.” A common phrase heard around Apple when someone is trying to learn the right contact on a project: “Who’s the DRI on that?”

True to form, the shepherd to his Apple flock often teaches in parables. One such lesson could be called the”Difference Between the Janitor and the Vice President,” and it’s a sermon Jobs delivers every time an executive reaches the VP level. Jobs imagines his garbage regularly not being emptied in his office, and when he asks the janitor why, he gets an excuse: The locks have been changed, and the janitor doesn’t have a key. This is an acceptable excuse coming from someone who empties trash bins for a living. The janitor gets to explain why something went wrong. Senior people do not. “When you’re the janitor,” Jobs has repeatedly told incoming VPs, “reasons matter.” He continues: “Somewhere between the janitor and the CEO, reasons stop mattering.” That “Rubicon,” he has said, “is crossed when you become a VP.” (Apple has about 70 vice presidents out of more than 25,000 non-retail-store employees.)

FYI – DO NOT FORWARD