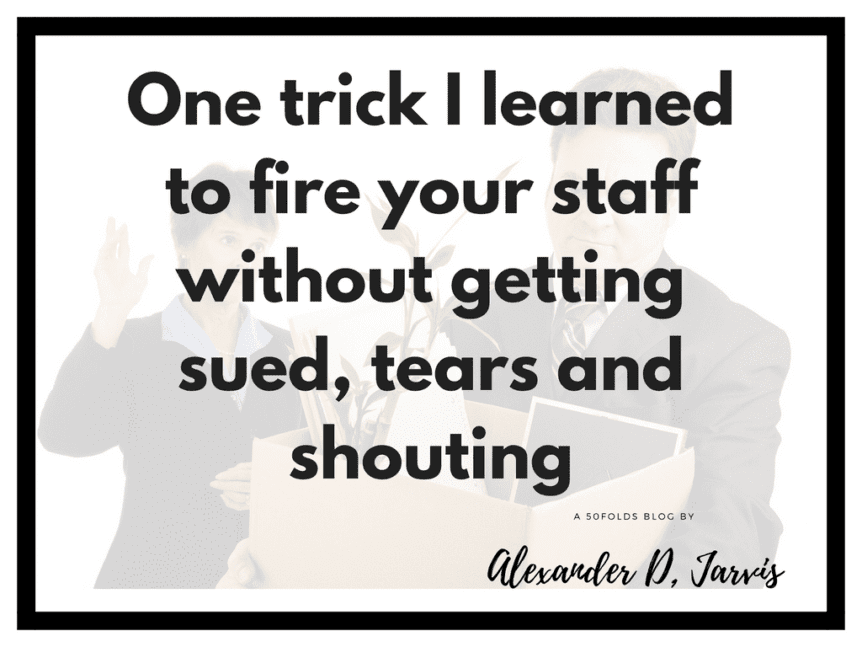 Hi Alex, Thanks for sharing this and was an amazing read. This hits right at point where I was struggling a lot. Cheers, Ajeet G.

I’ve been sued for wrongful dismissal. I’ve been in more than one termination and had people either freak out and shout, or at the other end of the spectrum, start crying.

None of this is fun. Maybe you can relate?

But do you know what? I was fundamentally firing people wrong.

But how I was firing people in meetings was not wrong. I was respectful, I let people talk, I was prepared and I did meets when no one was about so it wouldn’t be awkward. So what was I doing wrong?

I did one thing different and changed the lawsuits, shouting and crying to “Alex, thanks for giving me a shot.”

I’m going to explain this one key learning to you.

We were in super-aggressive hire mode. I was flying around launching new cities and attracting salespeople by hook or crook. I needed people to hit targets and I had the budget. But I needed the right people, performers.

When I started, I didn’t think. As my saying went, ‘don’t think, just do!’ I just hired people that performed in interviews. Then did proper onboarding one on one. I would pair them with another sales person to share learnings.

FYI, I learned it was more efficient to do hire in groups, with a min of two, as they always had the same questions and some were more forward at asking questions. Also frees up way more time personally and you can compare each’s performance against one another which is a more informative sample. This is a great learning if you are more normal, meaning can only hire a few people! Don’t hire one person, hire two.

I did a lot right to get salespeople prepped and ready to start selling. But I didn’t set them up for failure. And not how you think.

Don’t tell anyone, but, I used to cry sometimes in the toilet when I was sure no one was listening, just before I had to do the dirty deed.

I’d pulled people from a steady job into my world and now I was canning them. Now, I’m not even talking after 3 months. I’m talking 4 weeks. In fact, my performance test shortened to 2 weeks… 2 weeks!

No shit. I would literally fire people after two weeks, and sometimes a week. They had a week to close a deal and two weeks to close 5 deals in a week. I figured out that people either performed or not. Time didn’t have a high r2 to performance. That’s brutal I know.

Do you think people were happy?

I got sued once (The guy was desperate). People cried. People shouted.

I had an epiphany.

It wasn’t just that I was firing people (Which is clearly not sunshine and rainbows) that was the issue. I realised that I hadn’t properly set expectations for success and failure clearly.

In short, for performance orientated people that make money by selling stuff, I wasn’t quantitative and definite.

Look, I’ve been doing this a while. It’s not for everyone. You may be a high performer for other products, but here, sales people either are great or they fail. It’s nothing to do with you as a person. It just works or it doesn’t. For you to hit your OTE (on target earnings) you want to be a performer. Why do you want to be here if you aren’t making a lot of cash? And yeah, our folk are making out like bandits! We’ve figured out that people either do great or not at all. So here is the deal. You have one week to get a deal. In your second week you need to do 5 deals. If you don’t, then it’s not going to work. Your min goal is 5 deals a week on a rolling-basis anyway. Is that clear?

But do you know what? I never once had someone not take the offer. And let’s be real, no salesperson thinks they won’t make the cut.

OK, so salespeople don’t make the cut! Yes, I had to fire people a lot. But, it was better.

I remember the first time I implemented this. It was a chap in Melbourne, I’m clearly not going to name. I’m going to be honest. The prep spiel above was spontaneous, I just said it as I was tired of hiring, training, firing and feeling crap. It just turned out to work.

I hired him ‘on trial’ with a girl. It was also the first time I started training multiple people at once since I had only just got to the point where I had enough candidates (Managed to find the right head-hunters).

He was a decent chap, but nothing spectacular. He asked a lot of questions. I liked him. I went on sales calls with him (How else do you get respect from salespeople?). He leveraged his relationships to get meetings…

But, no deals. They just didn’t close.

His one-week milestone hit. I scheduled a meeting with him after work hours on a Monday.

After I had dried my eyes and didn’t look like a soppy little girl, I walked into the meeting room, a folder in hand (Termination letter).

Me: “How did you think the week went?”

Him: “I had a fun time, but it was harder than I thought”

Him: “Look, I know. I just want to say thanks for the support and for giving me a shot.”

That was sort of the end of it. We shook hands and did the BS small talk.

Why was this different?

There was no need to explain. Anything.

We agreed on clear targets and why they needed to be hit.

He didn’t want to work for me if he wasn’t making money either.

There were no grand promises and prospects. Everything was clear cut.

But, what about for non-sales people?

Good point. For most jobs, it isn’t so clear, at all. I’ll tell you what I do.

I set out exactly what I want people to do for me on a small scale, despite the potential scope of their role. I make sure once they start I support them, but also that they immediately start delivering on their core job.

I hire people who can think for themselves, even with VAs (Virtual Assistants). To do that you have to make clear that failing is cool… so long as they ask for feedback proactively. Failing has to almost be encouraged. When they fail, you need to allocate time to teaching and with zero spite. When you do that people feel comfortable ‘having a go.’

I think a month is a fine test period for pretty much anyone. If they can’t execute on their core job for defined tasks, you are on to a loser, so take the advice and fire fast. If they execute immediately above expectations, give them more, and make the test period 3 months.

Set expectations with people as follows:

By being really clear with staff on your expectations, you are not only doing yourself a favour, you are also ensuring the hire finds the right home themselves and doesn’t waste their time. They don’t really need to put their 1/2 month stint on their CV either, right…?

Think about setting clear goals when hiring people, so firing becomes a formality the hire knows is happening without a surprise.