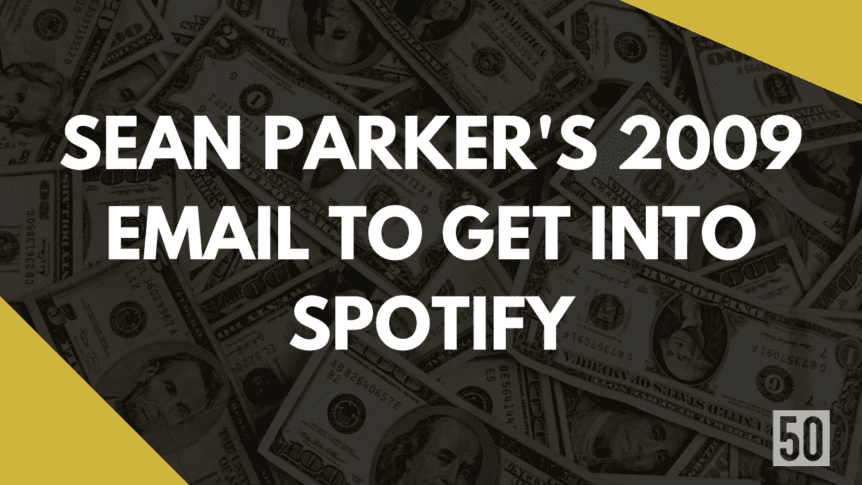 Tl;dr: The email Sean Parker sent to Daniel Ek at Spotify to start getting involved with them.

If you have watched the Social Network, or are a startup nerd, you will have heard of Sean Parker.

He’s founded companies such as Napster, Plaxo, and Airtime, and famously became Zuck’s guru at Facebook. But there is more.

In August of 2009 he discovered Spotify. Sean did his thing and got in touch with the founders and shared his excitement.”In order to create the next revolution in digital music I believe that you must BOTH meet and exceed the bar set by Napster a decade ago. You guys have finally done it.”

Wikipedia explains the relationship as “While working at Founders Fund, Parker had been looking to invest in a company that could further Napster’s music sharing mission legally. In 2009, a friend showed him Spotify, a Swedish streaming music service, and Parker sent an email to Spotify’s founder Daniel Ek. The pair traded emails, and in 2010 Parker invested US$15 million in Spotify. Parker, who currently serves on Spotify’s board, negotiated with Warner and Universal on Spotify’s behalf, and in July 2011, Spotify announced its U.S. launch. At Facebook’s f8 conference that year, Parker announced a partnership between Facebook and Spotify, which allowed users to share their Spotify playlists on their Facebook profiles.”

Here’s a video from 2012 with Sean and Daniel being interviewed.

Here is the full email, warts and all.

Goes to show if you send a long ass email and share your passion you can appeal to ego and get a response!

This approach might well work for a VC to get into a startup deal. I would not recommend founders pitching VCs to get investment.

I’ve been playing around with Spotify. You’ve built an amazing experience.
As you saw, Zuck really likes it too. I’ve been trying to get him to understand your model for awhile now but I think he just needed to see it for himself.

Facebook has been in partnership discussions with various companies to fully integrate music download with the Facebook profile. Most of these deals would have resulted in the wrong user experience and I’ve done my best to stop them where they didn’t make sense. In particular, there’s no way that iTunes could enable the right experience on Facebook. Business development teams have a bias for working with the top player in a given market, especially when they don’t understand that market. Unfortunately, partnering with iTunes would not only have created the wrong user experience, it would have had disastrous consequences for the emerging digital music industry.

I’m looking forward to meeting you guys sometime in early September, though I’m pretty excited about what you’ve done and I can’t resist sharing some of my thoughts with you here first.

Your design is clean, elegant, tight, and fast. While it’s clearly lacking some important features (the social stuff you alluded to, etc), I think you’ve done a great job with sequencing. You nailed the core experience around which everything else can later be built.

Ever since Napster I’ve dreamt of building a product similar to Spotify. I might have tried had I not been “side tracked” with Plaxo, Facebook, Founders Fund, etc. To be fair, I had very little desire to work with the record labels too soon after my somewhat unpleasant experience with them the first time around. (Though since then, curiously, I’ve become close friends with many of the folks who were once trying to destroy me…)
So rather than dive in again, I adopted a “watch and wait” philosophy, hoping that the labels would either (1) come to their senses and try something new, or (b) forced to the brink of extinction, hire new management opening the door to radical new ideas. Since then, the reality of Napster, Kazaa, and all the decentralized P2P clients has sunk in and the overall industry has shrunk by more than half.

What’s clear is that the labels never quite understood the way people really consume/share/experience digital music. And they couldn’t admit to themselves that this behavior pattern wasn’t changing anytime soon. Rather, to create the right experience, the business terms of their standard licensing deals would need to change.

And change they have (in subtle but important ways) to enable the user experience that you’ve created with Spotify. Perhaps it was wishful thinking to believe that these deals could have been implemented in the US first…so I’m not surprised that the Spotify “experiment” had to be conducted elsewhere.
I do wish I’d reached out to you guys before your most recent financing. I evaluated every other player in the market but was only able to use Spotify through a low-bandwidth proxy service which never quite worked right. At that time, I wasn’t aware that your licenses were somewhat different from what I’d seen in the past.
So as you can tell I’m pretty excited about what you’ve built…
I’ve waited nearly a decade for a product that could match the standard set by Napster on three counts:

For obvious reasons, none of the decentralized P2P products (Kazaa, etc) could ever approach the usability of Napster. The subscription products were doomed to fail on all counts due to annoying DRM, poor integration with the portable devices, and high barriers to entry. The pay-per-download products (iTunes, etc) still don’t take into account the way people really consume music: they have priced themselves out of the market and until very recently none of the products (except iTunes) could push music to the iPod due to Apple’s restrictions on AAC coupled with the labels refusal to sell unprotected files. Last but not least (for some utterly inexplicable reason) all of these products have lacked the basic usability (speed/responsiveness) that the world came to expect from Napster!

So we find ourselves in an odd place. The iPod monopoly has effectively stifled innovation in the market. The investor bias towards web applications over desktop applications has lead to a broken user experience and poor implementation of streaming music solutions.

You guys have changed all that. You’ve distilled the product down to its core essence and implemented the right basic set of features. As product designers we can never have exactly what we want, when we want it. We have to start by understanding the really important parts and building that core functionality first, then building additional features around that core. When you’re building consumer products, getting serious leverage in the marketplace (distribution) is the most important first order goal, so you need to accomplish this as quickly as possible and then shift gears to build second generation features.

You guys nailed the core experience: it’s at least as good as Napster for search and listening, and everything else can be built from there. Even though it’s not a download service, it has all the advantages of Napster for two reasons:

(1) streaming — widespread consumer broadband has made high-quality streaming possible, and
(2) playlists — quick and easy storing of songs in playlists which allows Spotify to act as a great front-end to your virtual music collection. My goal for the second generation Napster (once we’d gotten around to cleaning up the messy interface) was to implement social/sharing features. This would have dramatically increased the volume of sharing happening through the system.
Based on the comment you made to Zuck, I suspect that you’re moving in this direction. You should build this capability directly into the client, using Facebook connect to authenticate and then leveraging the viral communication channels to spread Spotify rapidly across the world.

You guys are likely going to be the first major success story with Facebook connect.

If you need some help navigating Facebook platform, in particular the viral channels, then I’m happy to lend a hand. One of the companies I run, “Causes” is the #1 app on Facebook with over 84 million users, and 25 million active per month. This is achieved through pure virality.

Direct integration with Facebook is a good idea too but this should happen via an exclusive partnership and you should wait until you have more leverage in the marketplace otherwise the economics won’t be very favorable to you. (I can help you with this on many levels… Zuck and I have been talking about what this partnership should look like… as I mentioned we’ve already passed on iTunes, LaLa, etc.)

My plan for Napster was to build a fully social music discovery and browsing product. Every user could share their entire music collection as well as playlists, favorite songs, featured songs, most played lists, “now playing (live)”, etc. all searchable and sortable. This is all sort of obvious, so I’m sure this stuff is already in your product plan somewhere…
At Napster, I never got a chance to implement any of these really interesting second generation social features. We were stuck with our rudimentary first generation product. The interface we built was “utilitarian” — and that’s putting it nicely. It was an atrociously ugly beast of a product that served its limited purpose just well enough to be serviceable. We had every intention of cleaning it up, developing next gen social features, and implementing advanced P2P technologies (striping, auto-selection of source, etc), but we never got around to it because of the demands imposed upon us by the lawsuit.

We released the first version of the client in 1999 and shut the service down a few years later. In that time we never released any significant feature upgrades — we only removed and crippled existing features in order to comply with esoteric requirements under the DMCA.

In order to create the next revolution in digital music I believe that you must BOTH meet and exceed the bar set by Napster a decade ago.

You guys have finally done it.

Since this email is getting a bit long, I’ll leave you with a one more thought and an offer of assistance.

Final thought: I’m glad that you guys resisted the temptation to build a web based app. I remain a strong believer in the desktop client approach in music for a number of reasons.

1. Speed/responsiveness of interface, and optimized downloading and streaming
2. Bandwidth savings of P2P architecture
3. Easy integration with hardware devices such as the iPod (ultimately you want to control the interface to the portable devices where you can monetize more effectively by charging for download…)
4. There are vast repositories of “grey” content on people’s computers across the world. This content is often forgotten by the labels and publishers. The fact that you have a client and P2P capability will allow you to someday unlock all of this content…this goes way beyond the master music catalog that is licensed to you by the labels. A big part of Napster was the joy of discovering various remixes, live recordings and other obscurities that copyright owners have literally lost track of.
5. While you could have built a “thin” client that runs in the background and powers web based streaming, why go to all the trouble of building and distributing client software when you could build the real experience? There is tremendous value in controlling the client software real estate and it allows for a much snappier experience.

That’s all for now. Congratulations on everything you’ve achieved.

Let me know how I can be helpful to you with Facebook, platform, viral optimization, investment, etc. I’m eager to participate in all of these ways and more. You should consider me both a fan and supporter of yours!
Best, sp