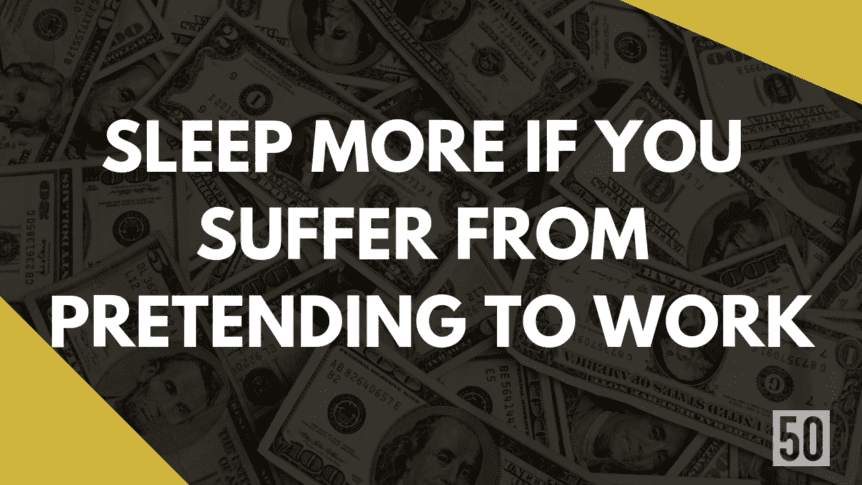 Tl;dr: Sleep more to be productive. Don’t be a hero. When you hear yourself saying ‘focus’ and smacking both sides of your head, go to bed! Pick things up after and be more productive.

“I clearly haven’t been sleeping much,” she said. Have you found yourself saying this, too? Are you working yourself to the bone but still not quite getting what you need to be done?

You might be suffering from a disease I call ‘pretending to work‘. It’s something that inflicts the most dedicated, but misguided of us. I was infected and am now in recovery.

I set up this agency to help founders with pitch decks. Yeah, everyone’s favorite thing in life…

So safe to say, sometimes people are pretty freaked out with it as it is perceived as being so critical to getting funding. Which, it sort of is, but anyway.

In the space of a day and a half, at weird ass times, when I was asleep or otherwise working, I kept getting messages on my livechat (when I wasn’t live) from someone saying they submitted their deck, they needed to hear back and bla bla.

Turns out when they made an application they provided their wrong email address. And then they didn’t notice I had later checked and emailed them back when I ‘guessed’ what their correct email was.

She pinged me again on livechat and we chatted. I told her I had emailed her on both the email provided and the correct one, to which she apologized with “I clearly haven’t been sleeping much“.

I told her she needed to sleep more. Otherwise, she was just pretending to work.

I learned about sleep the hard way

I’ve always been a machine (You’ll learn this isn’t a positive thing when you do cerebral work). I always stepped up and did what I thought it took to get things done.

At Uni when we had group projects, if someone wasn’t carrying their weight I would be passive aggressive and just ship what they didn’t do. I lost friends doing that, but I needed my grades to be high to get into M&A and no one was getting in my way of that. In hindsight, I was a n00b. I had not mastered the art of ‘mind fecking’; something I teach my mentees now. I should have exhibited better leadership abilities and influenced lackadaisical teammates, but Comme des Garçons! What do you expect of students when drinking Guinness and hitting on girls is what one would otherwise be doing. You just want to get the paper done and if others don’t do it, feck them- work harder and ship. That’s the first memory of me working late to get things done. It escalated from there.

I’m sure as shite not perfect. Effort does not always correlate to output. It’s something that took me a very, very long time to internalize.

The road to hell is paved with good intentions.

I have always been well-intentioned and for years I lived in hell.

There was no hell greater than in being in FIG M&A. FIG is Financial Institutions Group for people who aren’t sad bastards. It’s the department in M&A that deals with selling or buying of insurers, banks, asset managers and basically anything finance. Trust me, it’s like doing a Rubik’s cube and all the pieces are black. Do you think it is a pain to understand accounting? Well, every category has its own unique form of accounting. You have to know Basle III for banks, embedded value for life insurance and… who the hell cares. You don’t. I don’t anymore.

The day I joined Lazard, I was going up the lift and another analyst greeted me.

FML, yeah, it turned out to be.

One time an MD walked up to me and said “I’m meeting the CFO of [big ass company] tomorrow morning. Write a deck and figure out what I’m going to talk about”.

I was junior as balls. I asked a Director what to do and he said: “That’s your problem“, and walked off (cock). I worked all night. I got an Addison Lee on the way home delivered it through his door at 4am and I was back at work at 8am.

It was not what he wanted to talk about and he didn’t use it. And it was just one thing on my list of things to do.

It took listening to a ‘normal’ person for me to start thinking what I was doing was frankly bizarre.

One time I was at the Hollywood Arms in Kensington around 2010 and a friend in PR was at the table. She said, “If I don’t get at least 8 hours sleep I’m a total bitch”.

There were many peers that left earlier than I did on a regular basis.

That pissed me off.

Then I found out some got paid an even higher bonus.

That pissed me off even more.

I was working crazy hours, but I wasn’t as accurate as fitted my role.

I was creating a lot of output, but in a world where one mistake noticed by the CEO undermined the whole work, lack of sleep doesn’t guarantee you don’t feck up one thing in a huge ass model or document. It only takes one mistake.

I realized I was deluding myself; what I was doing was not right. I needed guidance, but I had no mentor to tell me how to deliver and grow. In banking, everyone is looking out for numero primo and just doesn’t give a feck. You are fundamentally disposable. It’s Lord of the Flys with Uzis.

To stay awake, I would order 4 shot espressos, 4x a day at the Starbucks off Stratton St. That’s fecked.

I would constantly find myself staring at a screen with something important to do and zone out. I would shake myself awake and say “FOCUS!”.

Do you know what I was doing?

I didn’t know it then, but I was pretending to work.

So you understand what I will get across to you, let me tell you a story.

Yes, I am obsessed, as Jesus ostensibly was, about using stories (parables) to get people to understand things.

So here we go again:

Pablo Picasso was sketching in the park when a woman approached him like some fecking Japanese tourist with a selfie stick.

“It’s you — Picasso, the great artist! Oh, you must sketch my portrait! I insist.”

Oh crap, FML, he probably thought. Some fecking Japanese tourist without a selfie stick. It was before taking a selfie for 20 minutes in a restaurant didn’t label you as a twat (I hate you people).

After studying her for a moment, he used a single pencil stroke to create her portrait. He handed the women his work of art.

“It’s perfect!” she gushed. “You managed to capture my essence with one stroke, in one moment. Thank you! How much do I owe you?”

“But, what?” the woman sputtered. “How could you want so much money for this picture? It only took you a second to draw it!”

To which Picasso responded, “Madame, it took me my entire life.”

How many hours you work does not matter. It’s the results that do. You get more done when you sleep properly.

Do you value your time? What is the $ value of an hour?

I clearly don’t value my time, given the time I allocate blogging trying to help you achieve your dreams through education and not all the shizzle which actually makes me money (Yes, I have multiple companies). I’ve become an expert in a bunch of things which don’t pay well, because the area I love the most (you mother feckers in early stage startup) is predominantly populated with broke people.

Picasso was famous as balls at one point. $5k for some ghetto portrait in a park is prob a steal now. But most people still equate value with time.

Someone asked today for me to help him make a model 7 years long. It will cost him $6k. It will take maybe 1.5 days. If he did it (especially without my templates) it would take months and it still not be as good. This is not an effective use of this CEO’s time. He should delegate it (To someone).

I recommend 8 hours of sleep. 6 is my minimum. You blow one hour on hygiene and one hour on de-fluffing your parrot. So in a day, you have 8 hours allocated to sleep and 2 to people shizzle. You now have 14 hours to play with. Travel time is allocated to calls (if you drive) or planning (if on the Tube) so it isn’t dead time (If you actually focus it is not, I promise you). You likely will need to spend 3 hours a day on email/slack, so now you are at 11 hours. You should be doing 2 hours of management a day, so now you are at 9. You have at least 1 hour call a day you need to do for sales, dealing with investor shizzle etc. Now you are 8. So each day you have ‘loser land‘ 8 hours of work a day. And yes, I presume you are eating and working and someone is getting you food, or you are getting food with someone you do one on one time with.

8 hours is very little time to get anything new done with the cognitive load you have already expended.

For those 8 hours you need to be a boss. You need to be thinking about where your startup is going, how to position yourself for the next fundraise, how to develop processes, how to convince that lead developer to join you. That requires thinking.

Alexa. Set an alarm in 8 hours

Every night, I simply say, Echo (I changed settings to Echo as Alexa seemed like more effort), set an alarm in 8 hours.

Echo wakes me up.

I’m a little different in that I literally don’t have to work anymore (so there is an element that I don’t enjoy being tired and like sleeping and can choose not to be).

When I get up I need to want to do things and those which challenge me. I need to continually create a reason to want to keep being in beast mode. I need perspective for wanting to do more and more.

When I am awake I want and need to be present as I spend a lot of time counseling investors and founders on important decisions. The ‘deals’ I do may not be for massive corporations anymore, but they are no less important to the people I work with.

I’m constantly starting a new company or building up one. There are so many things I know that I don’t know that I have to learn. I want to create new tools and concepts in the startup space. All of this requires clarity of thought.

As a founder, you need the same. Past a certain point of founding, you are no longer the one who should be doing all the work. You need to be thinking about what needs to be done, who should be doing it, analyzing reports bla bla bla.  All this requires thought.

If you are falling asleep you aren’t doing smart work. You are pretending to work.

Don’t be a hero like I was. You miss the important things.