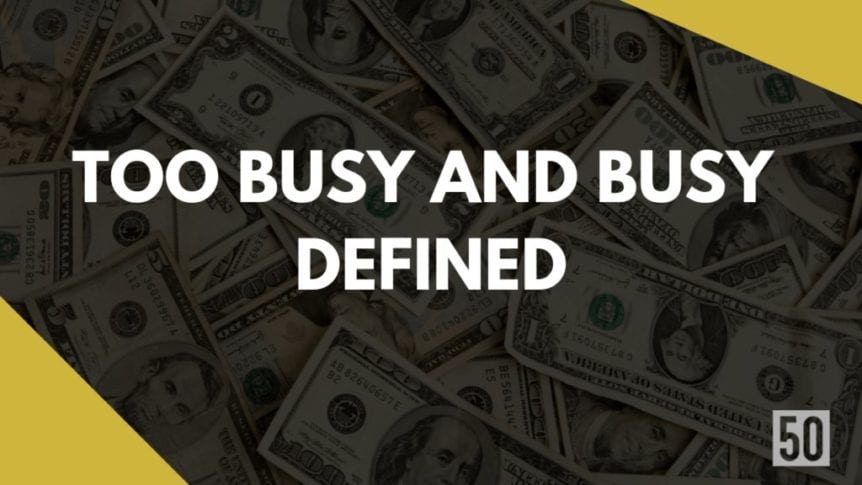 When I was a junior M&A banker, I worked crazy hours. 20 hours a day was pretty regular for me.

When I build startups I work pretty long hours and encourage staff to do the same. Only, I wouldn’t dream of making staff work a minimum of 16 hours a day (every day).

The banking world is a little different. Bosses have little compunction in requesting you never sleep.

I was looking through my old emails for a model I made and stumbled upon an email my friend in PE sent me 10 years ago on “Too busy and busy defined“.

Too busy and busy defined

Believe it or not, but people used to set up investment banks to try compete with the likes of Goldman and JP Morgan.

This was an old school version of you setting up a startup to compete with Google.

Well, three cheeky shaps in 1959 decided to set up shop and have a go.

For many years they just did research before that got competed away. They extended their product lines.

In the 1990s DLJ was trying to build their name on the Street for M&A.

According to Barron’s, “In many ways, the Donaldson Lufkin & Jenrette saga is the classic tale of David beating Goliath.” By all measures but one (junk bonds), DLJ had significantly less capital, offices and personnel that its competitors. Yet it was aggressive in acquiring new clients, doing deals and making lots of money. DLJ was termed the “new Drexel.”

As you know, when you are the upstart, you aren’t over-resourced. You need to work hard to become a player that clients take seriously.

Well on the 23rd of March 1994 one Vice President (I am guessing since typically VPs become staffing officers) called Brian Mullen decided the analysts and associates weren’t working hard enough. At 8:32pm he sent out an email.

In it, he sets out the difference between “busy” and “too busy”. 16 hours a day without any eating and chatting is the minimum. If you want to have “weekend plans”, go with the big boys on a “roadshow” etc you need to ask permission in advance.

There was at least a mission for why this was requisite.

At a time when we are trying to establish DLJ as the best firm on Wall Street, we all have to pull together equally until more help arrives.

I believe this will be easy for you to relate to.

Have a read of the email. If you’ve ever worked in banking it will make you laugh a little. If you haven’t it will give you an insight into how many hours you can work.

One funny observation is that someone has done some math at the bottom of the sheet to calculate the implications. That’s 92.5 hours during the week and 21 on the weekend.

It has come to my attention (largely because of my inability to staff deals) that everyone claims to be “too busy” which can cause inequalities in assignments.

The one true definition of “too busy” is being physically unable and having no more time to do more work (Not to take on one more deal).

Vacations, weekend plans, roadshows, overstaffed due diligence of drafting sessions must take a back seat to getting work done. If you are planning any such activities you should see me before going.

As you know, we rely on your judgment in taking on new deals. Bed checks, beepers, sign-in sheets, etc, are not part of our culture. Fairness and equitable treatment are part of our fabric. And if someone is not pulling as hard on their oar as hard as our hardest worker, then they are, pardon the expression, freeloading. Since none of you are held accountable for revenue, the issue comes down to fairness of the distribution of work.

At a time when we are trying to establish DLJ as the best firm on Wall Street, we all have to pull together equally until more help arrives. It’s only fair to your colleagues.

Feedback from someone on the team

Couldn’t help myself. I looked up the people who were on the email thread. I managed to find Vince DeGiaimo and message him. He said:

Alex, this never goes away. I guess it’s now a classic. Brian remains a good friend and a sensitive person. It was battle fatigue that got to him. As they say, you had to live it… 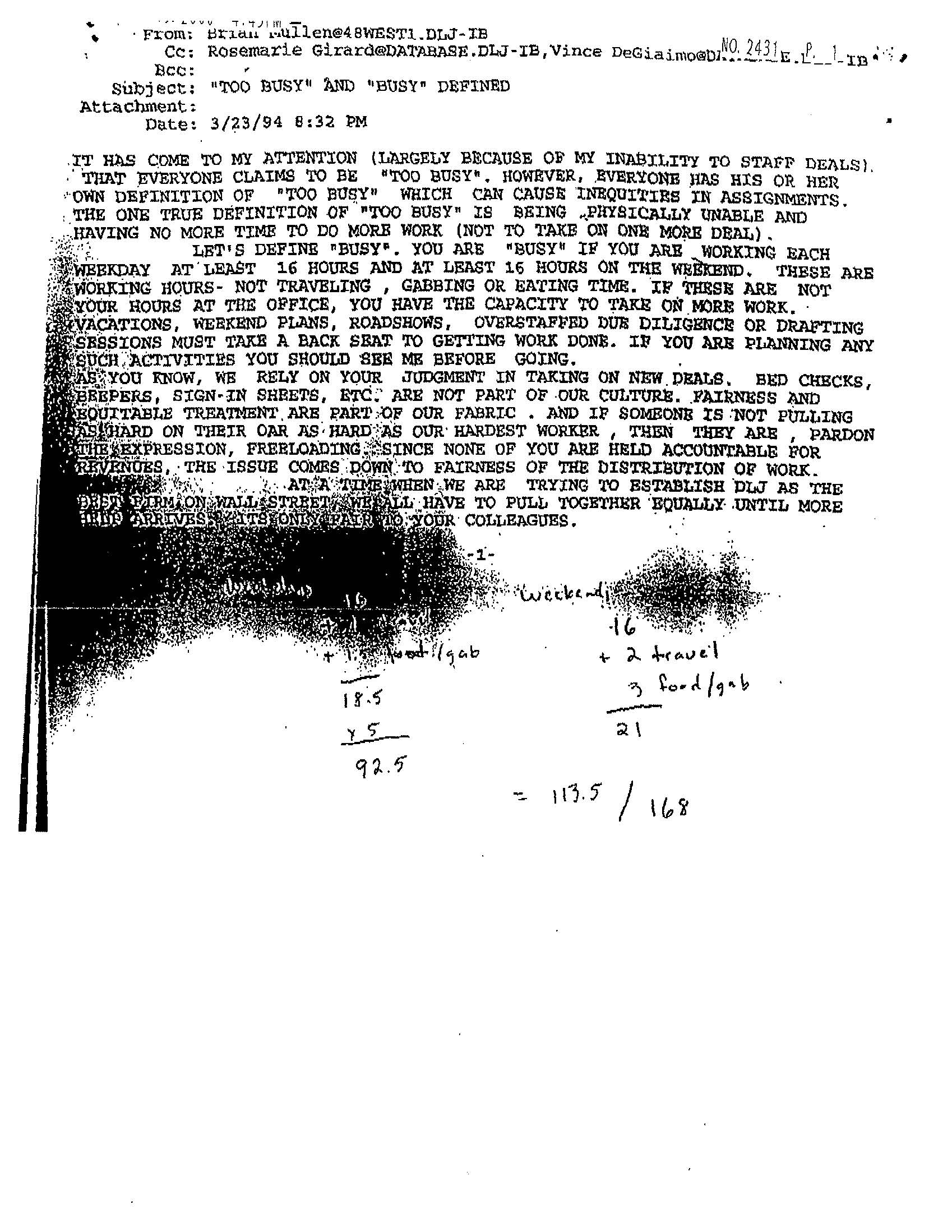