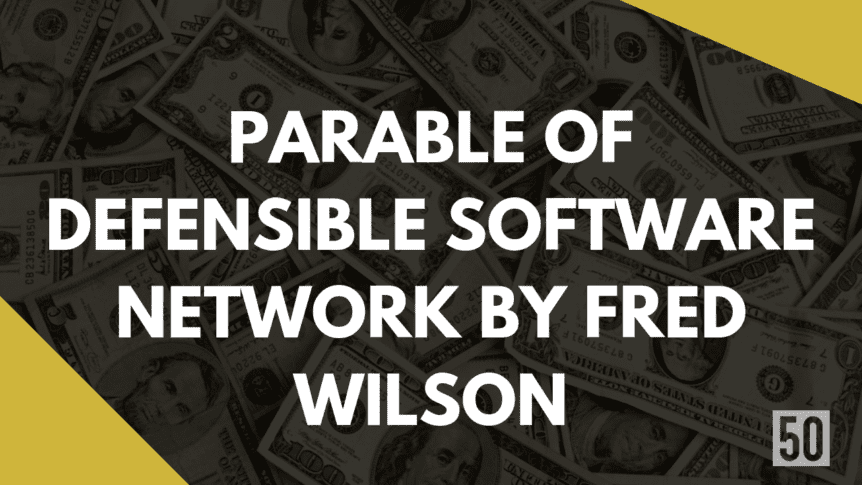 Fred Wilson posted a parable on his blog in 2014 that is instructive in explaining that software alone is a commodity and in order to create defensibility you need to embed a network.

Fundamentally, there is nothing stopping anyone over time from copying a feature set, or adding incremental benefits (e.g. making it better, cheaper, and faster). If you can create a network where every additional user adds more benefit to that network, you can reach a point of non-displacement, like LinkedIn and others have.

LinkedIn is a shitty product, but you have to use it as it’s too hard to get everyone to sign up for a new, competing service. Sure, you can copy the basic site, but if you build it they probably won’t come.

So if you are preparing for a pitch to investors and thinking you are going to respond to the question ‘how is your startup defensible?‘ with ‘we move faster and more nimble,’ then in most cases that’s actually bullshit and you know it. All you need is some team in SV who knows VCs with a hole in the pocket to burn and they can do the same, only with 20 more people.

So we asked ourselves, “what will provide defensibility” and the answer we came to was networks of users, transactions, or data inside the software. We felt that if an entrepreneur could include something other than features and functions in their software, something that was not a commodity, then their software would be more defensible.

An entrepreneur, tired of the long waits he is experiencing in his dentist’s office, decides that dentist offices are badly managed. So he designs and builds a comprehensive dentist office management system and brings it to market. The software is expensive, at $25,000 per year per dentist office, but it’s a hit anyway as dentists realize significant cost savings after deploying the system. The company, Dentasoft, grows quickly into a $100mm annual revenue business, goes public, and trades up to a billion dollar valuation.

Two young entrepreneurs graduate from college, and go to YC. They pitch PG on a low cost version of Dentasoft, which will be built on a modern software stock and include mobile apps for the dentist to remotely manage his office from the golf course. PG likes the idea and they are accepted into YC. Their company, Dent.io, gets their product in market quickly and prices it at $5,000 per year per office. Dentists like this new entrant and start switching over in droves. Dentasoft misses its quarter, citing competitive pressures, churn, and declining revenues. Dentasoft stock crashes. Meanwhile, Dent.io does a growth round from Sequoia and hires a CEO out of Workday.

Around this time, an open source community crops up to build an open source version of dental office software. This open source project is called DentOps. The project takes on real life as its leader, a former dentist turned socialist blogger and software developer named NitrousOxide, has a real agenda to disrupt the entire dental industry. A hosted version of DentOps called DentHub is launched and becomes very popular with forward thinking dentist offices that don’t want to be hostage to companies like Dentasoft and Dent.io anymore.

Dentasoft is forced to file for bankruptcy protection while they restructure their $100mm debt round they took a year after going public. Dent.io’s board fires its CEO and begs the founders to come back and take control of the struggling company. NitrousOxide is featured on the cover of Wired as the man who disrupted the dental industry.

Retelling of the ending by Albert Wenger

A young dentist, named Hoff Reidman, just starting up his own private practice, decides that he wants to network with other dentists. Because Hoff went to CMU before going to dental school, he’s pretty technical and he hacks together a site in Ruby called Dentistry.com. He emails all of his friends from dental school and they sign up. Every dentist wants to be on Dentistry.com and the site takes off. Hoff realizes he has to quit his dental practice to focus on Dentistry.com.

Albert Wenger, who happens to be a patient of Hoff’s, convinces him to let USV do a small seed round of $1mm to help build a company around Dentistry.com. Hoff comes up with a product roadmap that allows patients to have profiles on Dentistry.com where they can keep their dental records, book appointments, and keep track of their dental health. It also includes mobile apps for patients to remind them to floss and brush at least twice a day.